When you are afraid, even a few simple steps can turn into the journey of a thousand miles.

That’s what happened when it came to getting Bilbo, our mature-aged, introverted Border Collie clipped today. What could have all been very Simple Simon, turned into a drawn out ordeal…not just for him but also for all the humans involved.

As I mentioned in my previous post, we were getting Bilbo’s woolly coat belatedly clipped for summer. Or, as it turned out in the end, clipped to free him of his badly tangled coat. His aversion to being brushed while his winter coat was moulting as well as standing out in the rain, had caused serious matting and getting it all shorn off was the only way to go. The last time we had him shorn, I was grieving as the poor mutt faded from black to smoky grey as his coat disappeared.

This post covers Bilbo’s last encounter with the shears: https://beyondtheflow.wordpress.com/2012/12/10/summer-loving-a-dogs-perspective/

However, this time I was cheering. At least, I would be cheering if we could actually get him inside the mobile dog salon so operations could begin. 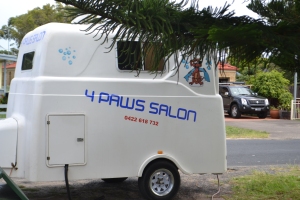 The dog salon pulls up.

So the Dog Salon pulls up and we took Bilbo out the front on the lead. I felt like an absolute cad taking the dog out there to be “tortured” when he thinks he’s off for a walk. His demeanor quickly changed and he curled up inside himself on the front lawn and wasn’t coming out.

As I’ve said before, Bilbo is not good with strangers at our place  at the best of times. He is usually withdrawn and reticent in social situations and what you’d describe as an introverted introvert. He is very much our dog and he loves my Mum as well but he keeps close. Even when it comes to people who come to the house regularly, he’s apprehensive and I usually hold him back for about 10 minutes so he settles down. Then, he’s fine. I think people don’t always realise that some dogs like their space and need time to warm up just like some people. They also really don’t like being smothered with affection by strangers, which through their eyes, might simply be a pat. These are the sort of dogs who would enjoy sitting in the corner at a party if they were human and be quite content simply observing the proceedings. That said, he can be quite friendly and isn’t a risk.

At this early stage, now that Bilbo knows he’s not going for a walk and something strange is afoot, he is not in a good way. He is refusing to let the dog groomer pat him and he is looking quite frightened and skittish. I know what he was like when I bathed him and I am concerned about how the clip is going to proceed…or even if. Naturally, we are concerned about the dog groomer’s safety which is why Geoff is going with him but she also has to have enough faith to know she’ll be safe. She has been bitten before and working with dogs day in day out, Bilbo’s withdrawn fear has her on alert. An old hand, she senses serious trouble.

This whole battle of wills just confirmed my belief that dog coats should all come with a zipper so they can be conveniently removed for cleaning and seasonal adjustments.

However, that isn’t going to happen so it’s a case of smooth talking. Reassuring the dog he’ll be okay and also reassuring the groomer, which also involves having Geoff in there with Bilbo. The dog is afraid and no doubt can sense what is at least my concern. Not that I was afraid but I was  stressed about how Bilbo would respond. What’s more, given the state of his coat and some underlying skin irritation, all that fur urgently needed to go!!

There are advantages of having helicopter parents. We keep our offspring both of the two-legged and four-legged variety under some kind of control…or at least we try!! Bilbo was needing close-range helicopter hovering at this point. He really wasn’t happy!! However, our support and the groomers’ patience slowly won Bilbo over enough.

The groomer noticed the fur balls behind Lady’s ears and so we decide to give them a quick clip and hope that Bilbo settles down when he sees Lady “survive”. Lady wasn’t too keen to go in either. I think she remembered the last time she jumped into a car with a stranger and she never saw home again. That was when we picked her up. However, she emerged unscathed and was her usual sociable, tail-wagging self. Unlike Bilbo, she’s quite the extrovert and social butterfly! She loves people and any attention she can muster.

While Lady is being fixed up, the male husband groomer is sitting down with Bilbo and building a rapport. Bilbo is warming up a bit and he’s now deemed a reasonable risk but as I said, Geoff was still going in the float with him. No one was taking any chances.

Bilbo has been clipped once before and really was a lot happier after that. Once he was in there and the clip had got started, he was relatively calm. I think he might have remembered that losing his coat was going to be a relief  and started to settle. He was still a wound up spring but he was somewhat compliant. 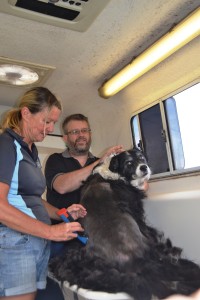 The clip gets underway. Look at all that fur coming off. As I said, it was like shearing a sheep!

The dog groomers were excellent and worked well with him. He wasn’t comfortable but he was clipped.

The clip is almost over…

Then, it was time for his bath. Our poor boy. He really doesn’t like new experiences all that much and getting a bath is definitely something he files under “torture” and “over my dead body”. However, although there was initially a serious scuttle of claws, the bath went relatively well.

A shorn Bilbo having his bath. Looks like he much prefers the salon treatment to the hose.

We knew from last time there would be no blow dry. Definitely no blow dry!! That sound was too much like the vacuum cleaner…his usual nemesis!

Suddenly, after all that kerfuffle, it was over. Bilbo was clipped and working as a very good team, we had all succeeded.

Bilbo’s even starting to look like a happy camper!

“Success is the doing, not the getting; in the trying, not the triumph. Success is a personal standard, reaching for the highest that is in us, becoming all that we can be. If we do our best, we are a success.”
― Zig Ziglar

It was funny when his whole ordeal was over, you could see such a sense of relief. A burden had been lifted. He’s been freed, liberated. Vive la liberte. He was trotting back inside and when Lady saw him, she really did a double take: “What’s happened to you , mate?!! Had a fight with the lawn mower?”

We also had a surprise after all that fur had come off. Bilbo has actually lost some weight. I had suspected he’d lost a bit and transferred it to Lady but the shorn coat doesn’t lie. It shows every single ripple and bulge and is just as  unforgiving as a human wearing a wet suit.

Bilbo is now trotting around the house with a real spring in his step. Grumpy dog is almost happy with a new zest for life.

Yes, he really has been set free!!