Welcome to Another Thursday Doors!

This week, my daughter and I waltzed through the doors of Sydney’s historic Capitol Theatre to see Charlie & the Chocolate Factory- The Musical and had the experience of a lifetime. You see, our dance teacher, Miss Karina Russell, is playing that most annoying of spoilt rich brats, Veruca Salt and we attended the performance with about 20 other students and parents in a great big riotous rabble who were very one-eyed with our affections, while of course wanting to enjoy and absorb the entire show to the max.

While I’m busting to share a bit about seeing the musical, first I’m going to run through the architectural aspects of the theatre because, after all, doors are about architecture. Yet, at the same time, you could say that for a fledgling performer,  getting their foot in the door and better still, having their name printed up on their dressing room door under that golden star, represents the fulfillment of a journey of a thousand miles, a lot of hard work and faith in their vision no matter what.

This year, the Capitol Theatre will be 127 years old. That’s older than any of us will ever be, and naturally this grand old dame has a past. Indeed, you’ll hardly be surprised to know, that she’s been revived (and you could even say reincarnated) into various guises over the years. After all, even a building must feel like a change from time to time.

The Capitol Theatre started out in life in 1892 as the New Belmore Markets, in Haymarket (although they were officially named after the mayor, Sir William Manning). The building was designed by council architect, George McRae, who also prepared the design for the Queen Victoria Markets. The market’s motif of fruit and foliage may still be seen in the terra cotta decorative relief of fruit and foliage in the spandrels of the arches.

In 1916 the building was converted to a hippodrome designed specifically for the Wirth Bros circus, which included a reinforced concrete water tank for performances by seals and polar bears. The tank had a hydraulically controlled platform that was raised from the base to form a cover that doubled as a circus ring when the pool was not in use. While I know the use of live animals in circuses is something many of us no longer condone, the clowns and acrobats still make the circus a show.

Within 10 years the circus became financially unviable and Wirth Bros initiated the idea of converting the theatre to a picture palace or movie theatre and Union Theatres became its next tenant. The classical reproduction statues and architectural props were manufactured in the US, scrupulously numbered for shipment and reassembly – supervised by Sydney theatre designer Henry White. Opening night was held on Saturday 7th April, 1928:

The effect of the new Capitol Theatre on the crowds which entered it on Saturday night was bewildering, and a little overwhelming. One seemed to have stepped from under the dull skies of everyday life and passed into an enchanted region, where the depth of the blue heavens had something magical about it, and something heavily exotic. Clouds passed lightly over; then stars began to twinkle. Then again all was blue and clear.

This “atmospheric” effect had been carried out, not only in the auditorium itself, but also in the entrance lounge, so that it leapt upon the visitors the instant they left the street. The construction and decorations were all in the Venetian style. Facing the entrance above the doors which led to the stalls ran a slender balustrade, with tapestries hanging over it and lying against the pinkish-brown, variegated stucco of the walls. At either end stairways in two flights ran up to the balcony. Everywhere one looked there was bas-reliefs set into the wall, tapestries hanging, twisted pillars of red and gold.

In the auditorium itself there was a much greater profusion of sculpture and architectural detail and objects of art; but the great size of the place enabled all this to be set forth with no suspicion of cramping. Indeed, the designers have achieved a remarkable feeling of depth and vastness. The two sides of the theatre are quite dissimilar in treatment. On the left, as one faced the screen, the irregular facade terminated in a delightful garden, with a round tower in the midst, supported by red and white Florentine pillars, with flowering vines drooping down towards the orchestra, with flocks of snowy doves. On the right a series of huge pedestals and niches, bearing reproductions of the Hermes of Praxiteles, the Capitoline Wolf, and other famous statues, and thrown into relief by the decorative cypress trees behind, led down to a large palace-front with a balcony. As for the proscenium itself, that was roofed in red tiles, to heighten the feel- ing of out-of-doors, surmounted by groups of beautiful glowing lamps, and very richly ornamented, a particularly attractive feature being a row of peacocks with electric lights behind them.

The lighting in fact, played a great part in the theatre’s success. In general it was diffused, and gained a pleasantly restful quality from the blue that floated In the roof; but at the same time bulbs bad been concealed here and there, so as to bring out the features of the decoration and give the surroundings vivacity. Sometimes, when all the main lights had been extinguished, there remained a charming half-glow on the proscenium, with the lamps, a glow of scarlet in the niches behind the statues, and a yellow glare behind some trelllslns at the sides as the dominant notes.

The first event on Saturday night when the curtain of rich varigated red and green rose from the footlights was the official opening of the theatre by the Chief Civic Commissioner (Mr. Fleming). The directors of Union Theatres, Ltd., said Mr. Fleming, deserved the highest praise for this venture, which had cost them £180,000. It was remarkable to think what progress the films had made during the very few years they had been in existence. He himself could remember attending the first motion picture screened in Sydney.”Sydney Morning Herald(NSW : 1842 – 1954), Monday 9 April 1928, page 4 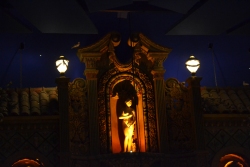 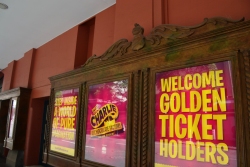 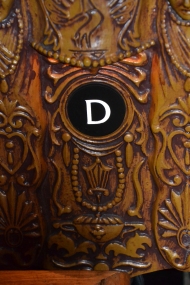 However, thanks to the advent of TV, attendances at theatres plummeted and after the very successful staging of Jesus Christ Super Star in 1972, the future of the Capitol Theatre hung in the balance once again and plans were made to demolish it and replace it with a modern lyric theatre. In 1981 Australia’s last remaining atmospheric theatre was snatched from the jaws of the bulldozer by a Heritage Council conservation order and plans were made to restore the building and create a world-class lyric theatre. You can read more about that here.

So, after all these different roles, as I said, the Capitol Theatre is currently hosting Charlie & the Chocolate Factory…the Musical. Although my daughter does a lot of dancing and has appeared in multiple performances, we only get to one of these big shows every couple of years and when we do we get right into it buying the merchandise, the musical score and feeling lost somewhere in between this fabricated world and reality. The first big musical I went to was Annie and then my daughter and I went to see Matilda a few ago. However, Charlie has a special place in our hearts thanks to Miss Karina, who I mentioned is our dance teacher and staring as Veruca Salt.  She spends the entire show in a very fancy and oh so over the top pink tutu, pointe shoes and a double-decker tiara…only the best.

Although Miss Karina has one of the lead roles, we didn’t know how long she’d appear on stage and whether she’d actually get a chance to dance very much. Aside from having seen her costume and being warned she gets eaten by squirrels, we were in the dark. Her performance was going to be a complete surprise. Moreover, that’s what it’s going to stay, because I don’t want to spoil your fun either. Let’s just say there was much more that I expected and that if you like a bit of ballet but might not get through an entire ballet, you’ll love this. Indeed, it might even encourage you to hit the big time.

After the performance, we all headed round to Stage Door to meet up with Miss Karina and we had the added bonus of Willy Wonka as well. I think all of us had seen her the day before in the studio. However, it was like we hadn’t seen her in years and as she walked out stage door, she was swamped. A performing artist can have fans, but nothing compares to this. I hope she felt the love, because I sure did.

I am still working on a more extended post about our Charlie experience, but it’s taking longer than I’d hoped. I researched Roald Dahl a few years ago for a series I wrote: Letters to Dead Poets. It turns out the Roald Dahl and I have some peculiar similarities and while I been beavering away on that post for a few days, I have to get a lot of details right and it’s taking longer than I’d hoped. However, getting historical facts wrong is worse in my book than making grammatical errors or spelling mistakes. Yet, I haven’t given up. It’s simply a work in progress.