No doubt, you’ve also experienced that mixture of excitement and disappointment on a long drive, when you spot something spectacular out the window, but are having difficulties finding somewhere to pull over safely. If you’re as desperate as yours truly to seize the moment in 6 x 4, the fear of missing out (popularised as “FOMO”)  grips you body and soul. You’re a possessed maniac just like that person busting for the toilet in the middle of nowhere yet precariously still strapped into their seat. Don’t you know that desperation too? You’re about to explode. You have to get out. You can’t wait any longer. The cry goes out: “Pull over!!!”

That’s what happened two weeks ago when we were driving North from Sydney to Byron Bay via the Pacific Highway and we spotted the sun setting through the burned out bush. The sun was enormous, glowing like a ball of fire through the charred eucalyptus or gum trees. It was strangely breathtaking. I had to seize the moment, which was rapidly disappearing with the fading light.

Fortunately, my husband who was driving at the time, was sympathetic to my plight and pulled over without complaint. The photos didn’t work out quite as well as I’d hoped, and actually tell quite a different story now I look at them back home. After all, they contain so many signs of life and nature fighting back against the devastating impact of the fires. Indeed, we saw vast expanses of trees exploding in a profusion of fresh green leaves seemingly as a form of post-traumatic growth. My goodness. These eucalyptus trees are tough. Bloody resilient. The bush wasn’t dead after all.

The family in front of the lens with me behind it.

By this stage, the bush fires had been extinguished up North, but were still blazing fiercely on the South Coast. Yet, we still weren’t sure what we were going to find. Independently, Geoff and I have been up and down this road all our lives and since we met 21 years ago, we’ve driven up here at least once a year to see his sisters and family. So, while this stretch of the Pacific Highway isn’t quite an extension of our driveway, we know it well. We care about it, too, and it sent a chill down our spines when we heard that a fascinating time capsule to early settlement, a museum called Little Italy, was at risk. I’m sure I screamed out: “NO!!!” to the TV. If I didn’t, I certainly wanted to. The devastation has been catastrophic.

However, we were relieved and almost surprised to see that the bush had endured, persevered and overcome. Indeed, we saw kilometres of bush where trees were sprouting fresh green leaves, an almost freakish, furry-green regrowth, as their will to survive went into overdrive. Indeed, I wondered if this was a variation of the post-traumatic growth we can also experience following a traumatic event. I’m not a scientist so I can’t know for sure. However, on a personal level, I found it very encouraging and it certainly lifted my sagging spirits. After being confined to the lounge room at home to escape the menacing smoke, I’d watched months of bush fire coverage on TV. Indeed, I was seriously starting to wonder how much of our precious Australian bush would be left when we ventured further afield. So, I found these shoots of green such a relief. A restoration of lost hope. 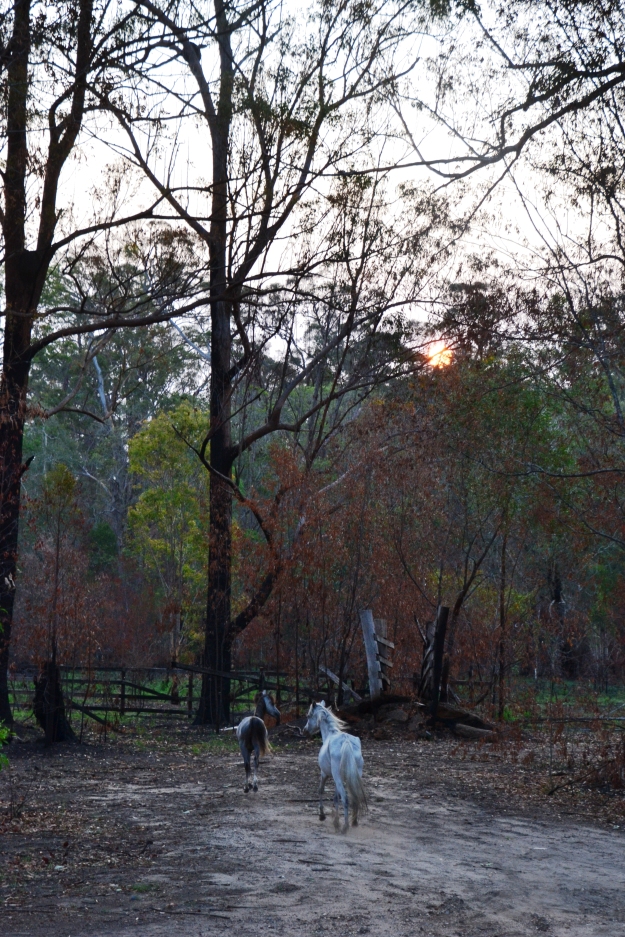 Horses running from humans rather than the flames.

We’d pulled over to photograph the sun setting through the scarred, burned-out landscape. However, while we were there a couple of skittish horses ran passed not to escape the fires, but from us. I madly clicked away and sadly didn’t do the moment justice. However, the makings are there. It doesn’t take much imagination to see these horses running from the flames. Much better in the imagination than reality, and I certainly don’t want to be around to photograph that. Indeed, I’ll leave that to the movies. Far too many animals have been lost in these horrific fires. I’ve seen enough. I just hope there’s some way our wildlife can bounce back like these trees and am grateful for the rain and for the incredibly generous donations which are coming in from around the world. They’re much appreciated.

There has been such catastrophic suffering. I don’t even know where to begin. Possessions can be replaced, but there’s the horror for many of the engulfing flames and smoke and many have lost their lives. There’s a post traumatic anxiety pervading all our communities. At a very basic level, just watching the coverage on TV is enough, but our population is relatively small here in Australia. Our friends and families were at the heart of these catastrophic fires, even if we were well away and not impacted ourselves. What is perhaps most telling, is that the smoke from these fires reached as far away as South America. That’s the other side of the world and a reminder, that we’re a global community.

Driving back home, we stopped off at Taree, where the fires hit hard. We saw the writing melted on road signs on the turn off and places where the fire had jumped across the freeway, showing just how bad it was. There was a roundabout covered in the charred remains of grass trees and it looked pretty bleak until my husband pointed out that fresh shoots were springing from the devastation. A keen photographer himself, he said: “that’s your shot”. Unfortunately, this time there was nowhere to stop, and that one went through to the keeper.

Have you been affected by the Australian fires? I’m thinking of you.