Last week at the Royal Sydney Easter Show, my daughter and I crossed to the dark side and had our caricatures done.

For anyone else, this would simply be  a bit of fun, a memory to take home and it wouldn’t also turn into a soul searching analysis of what it’s like to be created, not creating. Of course, yours truly had to analyze the whole experience. Pull it apart and put it back together again…give or take a missing piece or two.

Obviously, you’ve experienced my photography. However, you might not be aware that I did the photography and publicity for my kids’ school for 6 years and gained a lot of experience photographing people.  I know what it’s like to peer into a face, observing details, responding to a smile, a twinkle or even the withdrawal of acute shyness to draw someone out. I know how to work with all these personalities to create a story in 6 x 4 and hopefully bring out their best.

However, it’s a rare moment that I’m in front of the lens. Or, as in this instance, at the mercy of the cartoonist. Sure, he might use pen, ink and crayons but he has an inbuilt lens. You have to have a good eye. Be an excellent reader of people to pull off any kind of caricature. After all, you’re not just reflecting the surface, but peering deeply into the pond needing to fish out hidden gems in a very short time.  BTW, although I’m usually behind the lens, I’m actually quite an extrovert and all the world’s my stage. I have no trouble performing for the camera, or the artist.

Surprisingly, it was actually my daughter who mentioned getting our caricatures done. I wasn’t entirely convinced.

You see, I’d been forewarned. While I was backpacking through Europe as a 22 year old, I caught up with Mum and Dad in Paris and had my portrait done outside Notre Dame. Being a serious, philosophical poet, I insisted on a more serious, reflective portrait. I did NOT want to look like an airhead. Ever since, my mother, who was standing back watching the proceedings with abject horror, has wanted to get that portrait fixed to show “my lovely smile”. I didn’t know what she was talking about until a few years ago and now I agree. “Smile, Rowie. Look at the birdie!” On the same trip, two of my friends decided to get their caricatures done in the shadows of the Eiffel Tower. They were dreadful and I don’t think those sketches have even seen daylight. My two very attractive friends, had nearly been turned into trolls. Of course, I photographed their reactions in situ. What a friend?!

So, when it came to getting our caricatures done at the show, I wasn’t naive. The cartoonist was warned! Yet, I became so relaxed with him, that I forgot to take my glasses off until it was too late. That is very unusual. Indeed, I’d be surprised if any of you have actually seen photos of me wearing the glasses I wear all the time. The glasses which are all but glued to my nose. I’m terribly short sighted and now near-sighted, and am becoming somewhat thankful for the glasses I’ve always despised.

That’s not to say I was entirely at ease in my new role. Not that I’m a control freak. However, I did feel more than just a little curious watching him sketch away, especially when passers-by stopped and inspected OUR portraits in detail when WE couldn’t see it. Well, as usual, I exaggerate a tad. We did get to see quite a lot of the work-in-progress and I know both my daughter and I were noting which pens he used for what. She has a good chance of doing the tools justice, while I dream. I do a much better job writing about drawing (and dancing, skiing, playing my violin and making Nigella’s Nutella Cake) than actually doing it. However, I am starting to wonder about this life as a voyeur…Isn’t life meant to be lived?

However, of course, you also learn a lot watching…including the remote possibility that I might be a control freak after all!

That’s why I wondered whether the artist would ruin it by adding colour and whether the finished product would self-destruct when it went through the laminator, even though it was meant “to protect it”.

However, the thing about control freaks is that we like control for a reason. That when we don’t have control, things can go wrong. Get destroyed. Just like our caricatures when that blasted laminating machine turned us into a piano accordion. Been there, done that myself at home. That’s why I wasn’t sure about the laminator. That’s why I become the control freak. Things conspire against me.

Wow! We were so impressed with how we looked. If you’ve ever watched the quintessential Australian movie: “The Castle”, you’ll know this is “heading straight for the pool room.”

It was at this point, that being a creator myself made such a difference. As much as I was very disappointed to see our portraits seemingly destroyed when they looked SOOOO good, I knew what it meant for Graeme to watch as his creation almost met its death. From this point, we were no longer artist and client. We were united in our desperate efforts to salvage the artwork. Performing CPR, twice we fed it back through the very laminator which almost destroyed it, largely melting out the creases. He said it was his best work of the day and that he’d struck a chord with us. Got a vibe. I know what that’s like and what his creation meant to him. It was no longer just a piece of paper. He’d poured heart and soul into each and every detail and you look at our larger than life smiles, and a real sense of joie de vivre really springs from the page. To have that destroyed in front of your very eyes, was horrible. Sure, much worse things can happen, but it’s a hard thing for a creator to see their creation munched up like that. Yet, like the subject, the phoenix has largely risen from the ashes and is about to sojourn underneath  our exceptionally think Webster’s Dictionary, which is the width of two city phone books…HUGE and weighs a tonne!

How have you felt being the subject, instead of the author? The creation instead of the creator? Or, perhaps your creation has been lost in some way? I’d love to hear from you. Please leave your thoughts in the comments.

“I give thanks for the fact that I can get this stick with a bit of steel nib on the end, dip it in some black carbon stuff, and draw on paper. Now, people did it the same way 2,000 years ago. And there’s something lovely about that play, and making mud pies and a mess. That’s a lovely privilege.”

I was thrilled to bits to hearing Michael  Leunig speak at the Sydney Writers’ Festival. Indeed, I actually caught the lift with Leunig on the way to the session and of course, yours truly was gushing unlimited praise all over the poor guy, without so much as offering as umbrella. How rude!  He must’ve been soaked by the time he got out.
You can read about it here: Catching The Lift With Leunig. 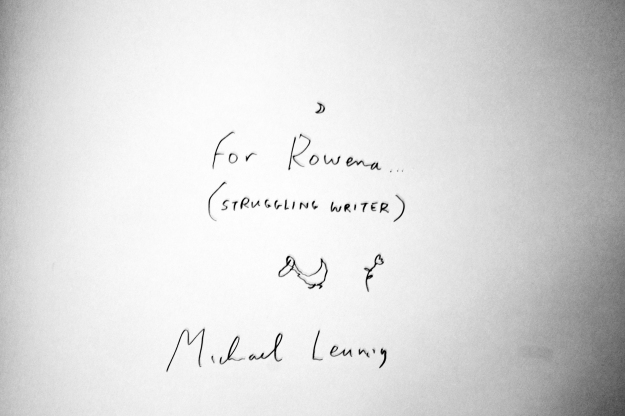 By the way, if you’ve never read Leunig poems and cartoons, you’re really missing out and you can duck over to his website  and click on Works. I promise…no regrets just mind-blowing morsels of inspiration.
Enjoy!
xx Rowena