Have you ever considered why humans became dog’s best friend? Why they chose people over  some other beast? I know it sounds unlikely now. However, way back at the dawn of time,  if dogs and cats had  become best friends instead of enemies, history would not have been history.

So, in the words of scientist Julius Sumner-Miller: Why is it so? Why did dogs choose us?

Another conundrum worth exploring, why is there such a close bond between kids and dogs? Kids pull their tails, dress the dog up in all sorts of clothes, sunglasses and hats and wheel them around the house in the doll’s pram. Yet, despite all of this abuse, the dog still comes back for more. Indeed, dogs are particularly protective of the children in their family.

Is it, as we humans often like to believe, that dogs love us with a pure, unconditional, altruistic love giving us unfettered affection and undying loyalty? That dogs live and breathe to be with us, love and even adore us?

Or, could it possibly be a case of enlightened self-interest?

I don’t know about you and your dog but our two dogs absolutely live, breathe, think and even see through their stomachs and it’s amazing how their undying love and devotion swells in those gorgeous, puppy dog eyes whenever there’s even a crumb of food around.

My mother-in-law coined the phrase “cupboard love”. She was no fool and not as easily conned as some.

Conversely, when there’s no food around, our dogs are nowhere in sight sleeping like comatose floor rugs, completely oblivious to my existence and that of the entire universe. That is, of course, unless the garbage truck or the posty are going past. Then they mysteriously reincarnate their lifeless fur coats and almost combust in a mad, barking frenzy. 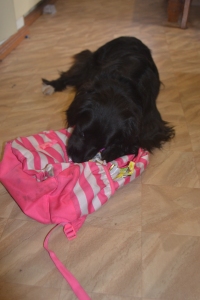 As much as I am notorious for caving in to pressure and giving tidbits to the dogs, the kids are prime targets, especially their school bags, which house their sadly neglected sandwiches (see my previous post). Being smaller, the kids are also easy targets for food theft as they’re around dog height and also tend to leave food on the floor. Our dogs are accomplished food thieves. Lady has been caught standing on top of the kitchen table scoffing home-made Jamie Oliver Lasagna. Obviously, you can’t knock her taste.

Last night, I caught Lady our gorgeous 2 year old Border Collie/Kind Charles Cavalier in action. She’d not only taken possession of our daughter’s school bag but had also managed to fish out a tasty wrapper.

It’s not just about food.

What sort of cat could ever provide us with a kennel like this?

Every dog also needs their own castle and that’s something no cat could ever provide! 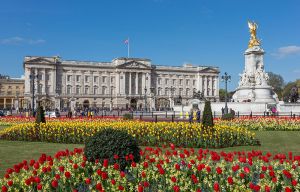 So what’s your verdict? Is it a case of true love? Or do we expose the dog as history’s ultimate cad? Let me know.