Welcome to Launceston on Day 12 of the Blogging A-Z April Challenge, where we’ve almost made it to the halfway mark.

I must admit that I almost fell off the wagon after exploring Jail Journal. My husband’s family, the Burkes, helped John Mitchel escaped from Van Diemen’s Land (Tasmania) and rated quite a few mentions throughout. Unfortunately, he didn’t always clarify which of the two Burke brothers he was referring to. Consequently, I had to do quite a bit of family history trawling to get my facts straight. Don’t you love how it takes a day or two’s research just to tick a box…grr!

Anyway, while I’ve been writing about the Irish Nationalists exiled to Tasmania, Jail Journal and also introducing you to the Forester Kangaroo, we’ve taken a leaf out of John Mitchel’s book. We’ve been hiding out with friends in Launceston, feasting on pizza.

Launceston is the business centre, or hub, of Northern Tasmania. By the way, if you want to fit in around here and not be classed “a Mainlander”, you’d better get the pronunciation right. It’s  pronounced “Lonceston” NOT “Lawnceston”.

Historically speaking, Launceston didn’t have as many convicts as Hobart and was mostly settled by free settlers, which has quite an impact on the social makeup. In Jail Journal, John Mitchel said: “she took an early occasion of informing me `she came out free’; which, in fact, is the patent of nobility in Van Dieman’s Land.1” (While John Mitchel was an Irish Nationalist seeking Irish Independence, he clearly believed in the class structure and was also overtly racist. Defending his support for slavery, he cited Benjamin Franklin, who helped draft the American Declaration of Independence and the American Constitution, yet owned slaves himself. Obviously, I do not support these views!!)

Probably my favourite place to visit in Launceston is Cataract Gorge.  Launceston’s Cataract Gorge and Basin are renowned for their rugged, natural beauty and it’s hard to believe you’re only 10 minutes drive from the CBD.  Indeed, you could almost believe you’ve wandered into a lost wilderness…another dimension…not unlike wandering through a wardrobe into mythical Narnia. I was spellbound photographing the rapids and trying to harness their almighty power within the impossible bounds of 6 x 4. While absolutely unachievable, I know I “see” so much better through my camera lens, almost seeing through things to their essence. So, it is always more than worth the effort.

Meanwhile, probably the most touristy attraction in Launceston has to be Penny Royal Adventures. Geoff and his sister fondly remember going to Penny Royal as kids where they had an actual functioning cannon foundry where they made the actual cannons and the tram was operational, “instead of being a museum piece”. Unfortunately, by the time we’d finished our walk through Cataract Gorge, Penny Royal was shut and we were lucky to grab some Gourley’s sweets from hotel reception. This of course reminds me of one of my pet gripes about travelling round Tasmania that virtually entire State shuts down on the dot of 5.00 PM, which was difficult for us to get our heads around when the sun didn’t set until something like 8.00PM and we were trying to carpe diem “seize the day”. (That said, we admittedly often started the day a bit late but for us having a precious sleep-in is synonymous with being on holidays.

While I know there is so much more to see in Launceston, we were only really passing through, catching up with friends. Indeed, on this trip we spent more time by-passing the place. Not because we don’t love the place, but we are trying to see more of the island and every time we come here, we’re juggling family, friends and our destinations are somewhat determined by who we’re staying with. Usually, we’re based over in the North-East around Bridport and see more of Launceston. However, being based in Devonport this time, we have spent much more time around Penguin, Ashgrove Farm, Deloraine and headed out to Stanley. As small as Tasmania might appear on the map, it’s a lot, lot bigger in real life, especially when you keep stopping all the time because there really is so much excellence to see, taste and explore.

Have you ever been to Launceston and what did you enjoy most?

I’m looking forward to catching up with you. I only need to polish one more post and I’ll be up-to-date.

Meanwhile, I wish you all a Merry and Blessed Easter.

Launceston’s Cataract Gorge and Basin are renowned for their rugged, natural beauty and it’s hard to believe you’re only 10 minutes drive from the CBD.  Indeed, you could almost believe you’ve wandered into a lost wilderness…another dimension…not unlike wandering through a wardrobe into mythical Narnia.

It’s so easy to get caught up in “the bright side”. I wasn’t the first and I won’t be the last. As usual, I was too busy staring through my lens at heaven to even consider the destruction this river has wrought… or the heartache.

The earliest recorded visit to the Cataract Gorge was made by settler William Collins in 1804 onboard the ship: “Lady Nelson”. He was particularly impressed by the South Esk and its cataract and wrote: “Upon approaching the entrance I observed a large fall of water over rocks, nearly a quarter of a mile up a straight gully between perpendicular rocks about 150 ft high. The beauty of the scene is probably not surpassed in the world 1.”.

However, the South Esk River is like a mighty, slumbering ghost. Only last year, Launceston experienced devastating flooding when heavy rains sent the South Esk River into flood on multiple occasions. In June 2016, water per second (cumecs) reached over 2,000 cumecs 2. I don’t know how you translate that into something which makes sense. The best description I’ve found, other than photos and footage of the flooding, was a comment made by the State Emergency Service regional manager Mhairi Revie during the less devastating November floods:

“What they need to imagine is 24,000 Volkswagens worth of water passing them by every second,” she said. 3.

I sort of remembered these floods, but last year is a very long time ago for this bear of very little brain.

At this point, I should probably clarify that while I’m what Tasmanians call “a Mainlander”, I don’t consider myself a “tourist” as we travel around Tasmania. After all, I’ve been married to a Tasmanian for 15 years… even if I haven’t “heard it all”. Yet, despite this familiarity, I was still very much viewing and experiencing the Cataract Gorge and the South Esk River as an outsider…an acquaintance with only a passing knowledge of it’s hidden depths.

So, of course, while I’ve been getting my head around the dark side of the South Esk River, I’ve been consulting my in-house, “Tasmanian Consultant”. Although Geoff was born and grew up in Scottsdale, lived and studied in Launceston and has witnessed such floods. Indeed, he was photographed by the local newspaper wading through flood waters in high school, just  around the corner from Parkside (see previous post).

While at university, the river flooded again and he noticed expert kayakers taking on the extremely dangerous floodwaters. Although Geoff used to kayak on white water rapids back then and played canoe polo, he wisely abstained from kayaking through the flood waters. However, he was watching the floods from a neighbouring rock and said he could feel that massive boulder vibrating from the sheer force of the flood waters. That’s pretty scary in itself and as I’ve looked at photos of the floods, I’ve been most amazed to see people standing so close to the edge. These flood waters are scary enough just watching the footage from the comfort of my couch.

So, once again I’ve been reminded how easy it is to gloss over history and forget the lessons of the past. The dangers of zooming in on beauty with its inherent  dangers and forgetting to ask the questions or watch your back. This can be hard enough when you’re on your own turf. However, it is a serious consideration when you’re travelling and you lack that local knowledge.  You only need to watch the news to see the truth of that.

However, that’s not to say we shouldn’t make hay while the sun shines.

Indeed, the day we were there, the weather was perfect…all blue skies. Hydrangeas  and agapanthus were flowering and I was struck by the enormity of towering trees, soaring rock faces reminiscent of Easter Island and the joys of catching up with old friends while returning to the pathways of the past.

It was a beautiful day!

Nothing like the jewelled splendor of a peacock’s feathers to animate even the most recalcitrant photographer, let alone excite this shutterbug.

We were meeting friends for lunch in Launceston’s  famed Cataract Gorge when we spotted one of their resident peacocks. Camera poised, I crept off in hot pursuit lucky not to fall head first into the pavement. It was a case of continuously pressing the shutter and seeing what I’d captured later, zooming into those stunning feathers with my lens extended to its full capacity. 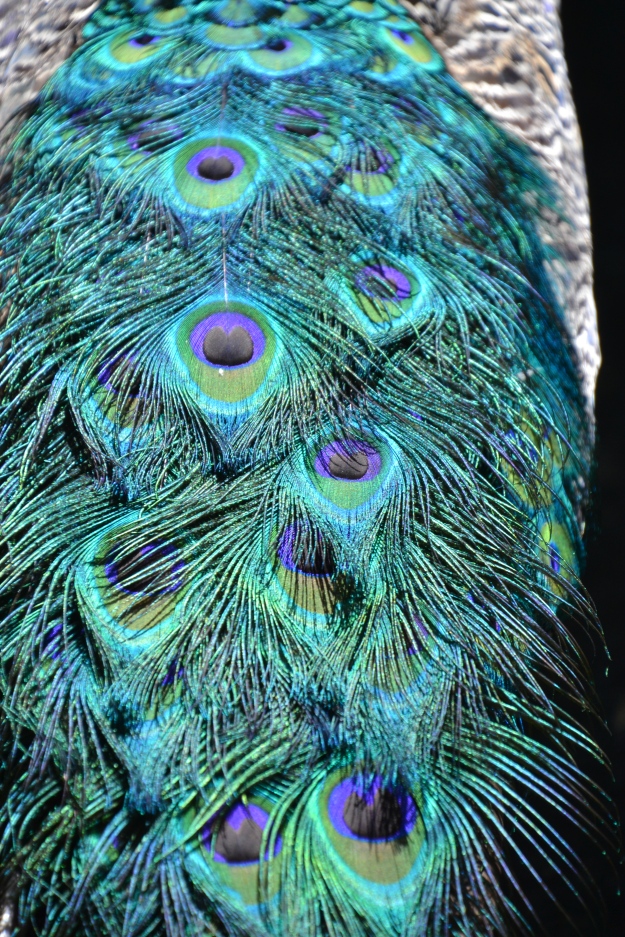 Although I am a serious animal and nature lover, there are parallels between hunting and trying to  get that perfect photographic shot. I have an absolutely roving eye, constantly looking out for that obscure angle or perspective as well as those perfect postcard shot of something as deliriously beautiful as a peacock’s feather.

I don’t know whether you’ve also experienced this wonder. This all-consuming joy where you all but merge completely into whatever it is you’re peering at through the lens but it’s exhilarating. Better than jogging, that’s for sure!

Have you photographed or seen anything lately which has completely blown you away like this? Please share. It’s taking me awhile to get back to the  comments but I will get there. Life’s about to return to “normal”.

BTW I did a quick Google search for peacock quotes. While I didn’t find any which complimented my post, this quote struck a chord and is a note to self about how I see myself:

“People are crying up the rich and variegated plumage of the peacock, and he is himself blushing at the sight of his ugly feet.”