Yesterday, Australia lost a very much loved, living legend, when cricketer and commentator, Richie Benaud, passed away aged 85. Richie Benaud was the “voice of cricket” and as Prime Minister, Tony Abbott said:Richie Benaud “was the accompaniment of an Australian summer, his voice was even more present than the chirping of the cicadas in our suburbs and towns, and that voice, tragically, is now still.”

Even though I’m not even close to being a cricket fan, Richie Benaud’s appeal went way beyond the pitch. Indeed, after commentating for so many years, he felt like something of an aged Uncle or Grandparent who chatted to us throughout the game, telling us what’s what. Like so many embarrassing dads, he had his own unique sense of style and a way with words that was legendary. Indeed, when you checked out the crowd at a cricket match, you’d find more than a couple of look-a-likes in the crowd. Golly, some of the interpretations of his hair, were almost as incredible as the man himself.

To see his loyal fans decked up in force: http://www.smh.com.au/sport/cricket/benaud-boys-pay-tribute-to-the-international-man-of-cricket-20120104-1pkog.html

A crowd full of Richie Benauds think the play is “marvellous”!!

Anyway, as I said, I won’t and can’t even pretend to be a cricket fan.

Indeed, I hated cricket growing up. Every Summer, my brother and I conducted our own fierce battles off the pitch as we fought for who controlled the TV.  I swear my brother could have spent an entire summer watching and playing cricket, which as I’ve found re-reading an old journal, drove me absolutely round the twist.

Back in the day before remote controls, that meant grabbing hold of the rotary channel  selector in one hand and the on and off switch in the other and somehow fighting off your opponent with any remaining body parts without letting go. It’s funny because even though a vehemently detested cricket at the time, that still remains the Golden Age of cricket for me and I now sing along with “Come On Aussie, Come On” choking back the emotions as I remember Dennis Lillee “pounding down like a machine”: www.youtube.com/watch?v=2qJLi5y2d2w

That said, I chuckled when I heard Richie Benaud talking about the upcoming Summer:”We won’t miss a ball of the cricket”. Thinking back to my brother, I now realise that things could have been an awful lot worse and I hope Benaud’s wife, Daphne, enjoyed being married to the game as well as to the man. She pretty much had to love cricket.

All I’ll say, is thank goodness for the Internet and two TVs. Geoff a serious cricket fan as well.

So, as a fleeting tribute to an incredible man who I’ve felt has been living in my lounge room for so much of my life, here are a few of Richie Benaud’s Classic Quotes:

“The key thing was to learn the value of economy with words and to never insult the viewer by telling them what they can already see” – on commentary.

“And Glenn McGrath dismissed for two, just 98 runs short of his century” – on the Australian fast bowler, famous for his ineptitude with the bat. Just as well he could bowl!!

“Put your brain into gear and if you can add to what’s on the screen then do it, otherwise shut up”

“What I want most from being a television commentator is to be able to feel that, when I say something, I am talking to friends”: talking about his audience.

“There was a slight interruption there for athletics” – referring to a streaker.

“When my hair is long enough to be cut, I go to my wife’s hairdresser, and she generally ways for it.”

“I once said to (Australian all-rounder) Keith Miller how disappointed I was to have made my debut in the same year as Bradman retired. How wonderful it would have been to have watched him play at the SCG in 1940 and then to bowl at him on the same ground. Nugget remarked drily that everyone has one lucky break and that may well have been mine.”

Benaud said of his mother, “She improved my love of vegetables by introducing the phrase, ‘You can’t go out and play cricket until you have eaten all your vegetables.'”

Condolences to Benaud family, especially his beloved wife, Daphne. From all accounts, they had an incredible partnership!

I will give Richie Benaud the last word:

“This had been a presentation from Nine’s Wide World of Sports.” 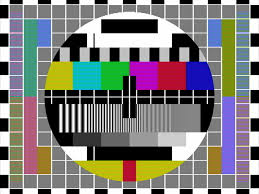 RIP Richie Benaud. This was the old test pattern, which used to broadcast in the good old days when the TV went to sleep.