Tonight, I can offer you a slice of apple pie, which my husband Geoff brought back from Bilpin today. Bilpin, which is known as “Land of the Mountain Apple” is a small town in the Blue Mountains, west of Sydney.

Above: Sunrise at the campground, Bathurst.

Geoff stopped at Bilpin on his way home from Bathurst Supercars Championship. Geoff and our son had met up with family and camped near the track and had grand stand seats.  They were only metres away from the start of the race and the atmosphere must’ve been electric. Nothing beats being there.

Meanwhile, my daughter and I were back home. She had dance commitments and car racing isn’t my scene for that length of time and the cost involved.

However, the car-racing contingent had a fabulous time.  Our son was apparently in seventh heaven and gets off on the stench of burning rubber and the roaring thunder of all those V8 Supercars zooming round the track. The oldies were taking a bit too long to get moving in the mornings. So, he’d make his own way down to the track and catch a few extra races. As you can see from the photo, he also managed to meet up with his favourite driver, David Reynolds. 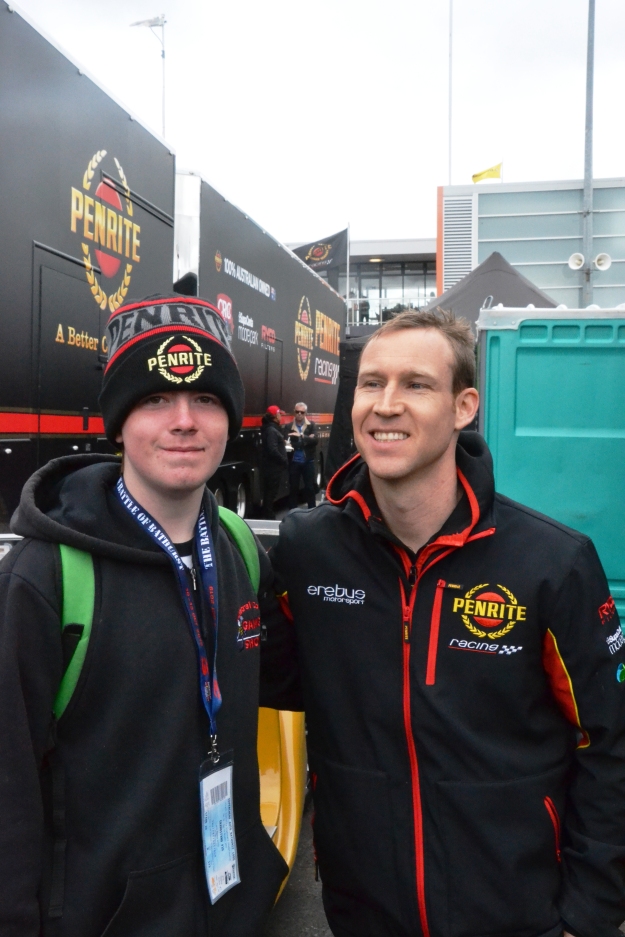 Unfortunately, the results of the race are currently in limbo after stewards slapped the winning team with a team orders rule breach charge.

Meanwhile, on Saturday our daughter was appearing in her dance school’s dance team production. The production had three different acts and our daughter appeared in two. The first act was their rendition of George Ballanchine’s Serenade. It was so incredible that it almost made me tremble inside. I was mesmerized simply by the way the flowing dresses almost glowed with a luminescence under lights. So much of our modern word is fast moving, but this was much more serene with the movement seemingly slowed down. Unfortunately, after only seeing it once, I can’t remember details only the emotions it roused and this sense of being in absolute awe of how well these young women could dance. I have since watched the New York Ballet perform Serenade (on Youtube of course) and these young women can hold their heads high. Unfortunately, I don’t have any footage to share from our production, but you can click Here to see it performed by the New York City Ballet.

Meanwhile, in between driving our daughter to rehearsals, I have thrown myself back into my family history research. A few months ago, the son of my grandfather’s cousin got in touch and when I checked my notes, they were in a terrible mess. I’d managed to trace this side of the family back to an Edward Quailey/Quealy who married Margaret O’Neil in New Zealand in 1881 and they moved to Sydney in the next year or so. Anyway, I ordered Edward’s death certificate, and this showed he came from Lisheenfroor, Moyarta, Kilrush County Clare. It also showed that his parents were Thomas Quealy and Bridget Haugh. So, I was able to spend a few days deeply immersed in data without really finding out terribly much. However, it does feel like I got to meet every other Quealy family in the district.

I don’t know what all this research tells me. With this particular branch of the family, they seemingly moved into an Irish enclave in Sydney and their children mostly married people of Irish descent. This makes sense in a way. However, I also have Aboriginal family members and that puts a different slant on things. This Ireland which was transplanted onto the the Antipodes, was Aboriginal land. Well, at least it used to be. BTW we also have an Irish Famine orphan who was brought out to Australia, Bridget Donovan. She married and Englishman and two of her sons partnered with Aboriginal women. So, it’s interesting to see how the immigrant experience can vary. That we’re all individuals. That said, some go with the flow, while others blaze their own trail.

Meanwhile, it’s meant to be Spring here, but the only signs of Spring, seem to be the dogs losing their coats. The pups are largely short-haired and the damage isn’t too bad. On the other hand, we’re surprised Lady still has any fur left. In the last week alone, we’ve brushed off enough fur to create a second dog and what with the cold snaps, I thought she might be wanting it all back. It’s actually been uncharacteristically cold and the guys were freezing up at Bathurst. No doubt, I’ll be complaining about the heat soon enough. It’s no doubt just waiting round the corner.

How has your week been? I hope it’s gone well.