“The secret of genius is to carry the spirit of the child into old age, which means never losing your enthusiasm.”

There are so many ways our communities are being hit hard by the coronavirus. While the massive loss of life and the incredible suffering experienced by those hardest hit by the virus, along with those who’ve lost work and are facing financial ruin, there’s also that massive impact on relationships due to enforced social isolation. For many, their greatest struggle is being cut off from the people they love more than life itself….their grandchildren.

Celebrating my grandfather’s 95th birthday. It was the last time we saw him and he passed away a month or so later.

While searching for a photo of my grandparents’ home in Ipswich for my travel series, I came across a string of photos of my kids with my late grandfather, which vividly capture the intimacy of their relationship, and how they really helped my grandfather come out of his shell and sparkle in ways that were truly miraculous.

With the elderly being at the highest risk of catching the virus and having the worst possible outcome, and kids being a good potential source of transmission; physical contact has been put on hold. Stopped. We’ve all been told in no uncertain terms to “stay home”.

However, as much as it’s for grandparents’ own good in terms of their physical health, being kept away from their grandchildren and the love, joy and energy they bring, is also having a potentially damaging impact on their mental and cognitive health.  No doubt families are very concerned about the risk of regression. Whether the door between remembering and forgetting will shut during this time of social isolation is over and stay shut. That there will be no turning back.

I get that.Yet, with no alternative, we can only hope that nursing homes are finding ways of keeping these connections alive when it’s difficult for families.

When my grandmother went into the nursing home, the staff worked with her and my aunt to make a special memory book. There was nothing wrong with her memory, but she’d had a series of crippling mini strokes and had lost the capacity to speak (which was utterly cruel when she was already immobile and spent hours connecting with family via the phone.) This book traced from when she was born and her parents and siblings right through school, getting married, family life, work and grandchildren. From a practical point of view, the book was a brilliant memory jogger, and it also enabled staff to connect with her in a personal way when family weren’t around. They could get to know her. These days, however, this book is a precious time capsule…her life story.

This is something families could put together at home and drop off for their loved ones. I’m sure it would help. Clearly name everybody in the photos and use large print. Keep it simple. Add drawings from the kids etc. Make it special.

Meanwhile, I also want to share a very special visit our family had with my grandfather, Papa Bert. This was early in 2007 and not long after Christmas when we gave our then three year old son a Fisher Price laptop for Christmas. It was a very simple device and the mouse was actually designed to look like a mouse. That’s quite important for the story because when our son was teaching Papa Bert how to use his laptop, he told hi to put his hand on the mouse, and he did following the instructions to a T. This was the very same man who’d rejected the high-tech electric typewriter he’d received for his 80th birthday and stubbornly persisted with his manual typewriter which must’ve come from the ark. This bright, animated computer user, was also a far cry from the man who slept through Santa’s visit to the nursing home and wasn’t even responding much to family members any more. However, his blue-eyes were sparkling and you can see the connection between my 93 year old grandfather and my three year old son as clear as day.

I don’t want us to forget that ever!!!

Papa Bert meeting our son for the first time at his 90th birthday party. Hard to believe there was 90 years between them.

The middle-people can often get in the way of the very old and the very young, but there is so much love and the benefits to their well-being go far beyond words.

Please keep holding onto that and finding ways of connecting through these extraordinary times and don’t let go. 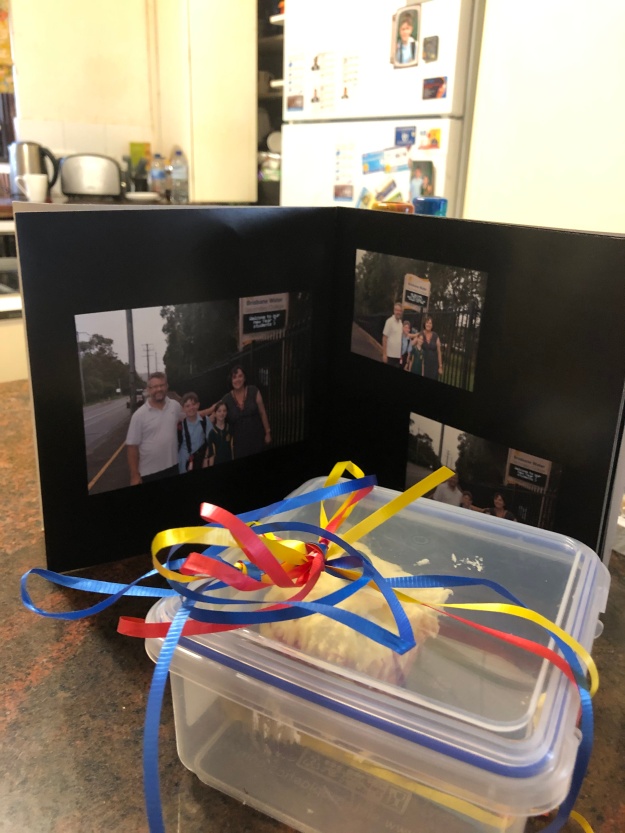 The remains of the cupcakes we sent my parents. Mum sent this photo back with the box positioned in front of some photos of us.

I also need to consider my own parents in all of this. They’re now in their mid-70’s and considered “elderly”, although they’re in denial and it doesn’t make much sense to me either. Not that I’m one to throw stones. I’m  grappling to get my head around 40 and last year I turned 50 and it’s getting harder and harder to keep treating these milestone birthdays as another 21st!! We did manage to leave a box of home-made cupcakes on their doorstep through the week, when Geoff was down in Sydney for work. They did us all a world of good. Mum rang up sounding much more animated and that physical expression of love meant a lot.

Meanwhile, I’m trying to connect with our teenage daughter. I’m hoping the chocolate caramel slice might work. She’s been spending lock down in her room chatting with friends, and taking the dogs for an extended daily walk. That said, I am getting a lot of writing done. So, there’s a lot to be said for independence.

Of course, the absolute winners of this coronacrisis in our family are the dogs. They not only have four ball and stick throwers at home, they’ve also been going for extended walks. They’re grinning from ear to ear just as long as it’s not their turn to be left behind!!!

Are you currently cut off from your grandchildren? Or, perhaps your kids are being separated from their grandparents? How are you keeping in touch? I’m thinking of you and would love to hear from you in the comments below.

Fred had never seen a chess set made of cheese before, and couldn’t resist chomping into the rook breaking at least two teeth and his pride.
“Oh, Fred!” gushed his wife. “I leave you for a minute, and more trouble. That’s going to be another couple of crowns. I’ll call the dentist.”
Yesterday, he’d overheard her talking about a babysitter, even sending him to a home. Darn this blasted whatsy-me-call-it! He was gunna shoot it.
Mary gave him another orange juice. The blur only deteriorated, and he no longer cared what it was called. Just as long as it hurried up.

This has been another contribution to Friday Fictioneers hosted by Rochelle Wishoff-Fields. PHOTO PROMPT © Jeff Arnold