If you are one of those people who experiences creative overdrive when all your senses get stimulated at the very same time, then perhaps you’d better stay away from Schools Spectacular. It’s the largest variety show in the world and included 5,710 performers, which also gives the show its other name: “Schools Specktacular” as most parents require the Hubble telescope or a telescope to spot their kid. You’ve just got to hope you can find them at the end.

Our daughter heading in to perform.

Anyway as you’re well aware, I see through the lens of my SLR camera. It gives me much better vision than my glasses and not only that. It saves that vision for later and I can watch it again and again and again.

However, those “Spectacular Powers That Be” banned so-called “professional” cameras. So, for the first time EVER, my extra long lens worked against me. My poor camera was banished to the boot.

Down but not out, I took over Geoff’s “camera phone”. Desperate times called for desperate measures. I was back to being a mere mortal again. It felt like the photographic equivalent of riding a bicycle in a Formula One race. Although the phone might be good at taking selfies, that’s not what I was there for. 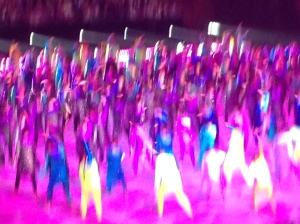 However, all wasn’t lost. It turns out Geoff’s camera phone has a curiously abstract perspective, capturing some interesting effects.Well, it wasn’t just his camera phone because there was still a photographer’s eye hard at work. I thought I’d get some interesting effects with the dancing sea of arms and legs. I  just didn’t know  how they’d turn out.

I would also like to recommend reading my previous post about some of the disability access struggles I had at the venue… Qudos Bank Arena at Sydney’s Olympic Park. I didn’t write this for my own benefit. These issues need to be raised for the greater good. Here’s Accessing Schools Spectacular.