Welcome to Another Monday Afternoon Coffee Share in Australia.

This week, you’ll be thanking your lucky stars you popped round for a visit. That’s because I’ve not only been to visit the Koi Dessert Bar of Masterchef fame, I’ve also made Pumpkin Soup. For me, there’s only one way to make Pumpkin Soup and it has nothing to do with tins. Indeed, tins are heresy.

So, would you like tea, coffee, juice or water and I’ll let you help yourself to a choice of soup or sweets.

Our week had more than the usual ups and downs. 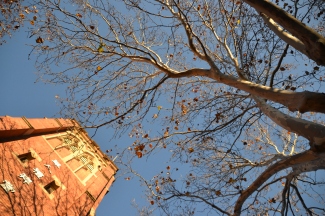 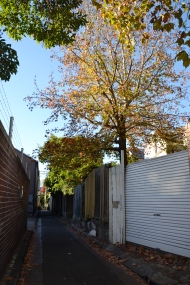 On the upside, I caught the train down to Sydney for a medical appointment and had the afternoon to myself walking around Central Station, through Chippendale and into Surry Hills and Paddington. This area is characterised by 19th Century terrace houses and even though much of it has been renovated and gentrified, there’s still that element of grunge and even though the real estate there is very pricey, the terraces still only have a yard the size of a folded handkerchief. Every time, I go to Surry Hills, there’s something different and this trip, I focused on the striking Autumn leaves, which looked so poised against a deep blue sky.

I arrived back home with the excitement of a few desserts for the family to try. However, that excitement was broken by news that the son of a family friend had died suddenly, leaving behind his wife and three little kids…not to mention his parents who have been friends of my Mum’s since forever. This guy was a year younger than me and being a boy, I never played with him growing up, but he was around. His parents were around a lot. Naturally, that felt like a brick just hit me in the head and I reiterate previous questions about why bad things happen to good people, even though even I’ve reached an uneasy truce with this imponderable conundrum.

Friday afternoon, I rang my 11 year old daughter to tell her that I was stuck in a queue at the supermarket. I was meeting her only metres away and all she needed to do, was turn around to see me. However, she was sobbing when she answered the phone. She’d walked into a pole. Broken her glasses. Cut herself and was at the Medical Centre. This wasn’t the medical centre we usually go to either so she was in a very unfamiliar environment with people she didn’t know, and she can be very shy. Fortunately, the staff were exceptionally kind and another Mum had found her and taken her in. So far so good, except once I appeared, stitching up the cut needed to be addressed. Either they could do it there with only a local anesthetic or she could have it done at the local hospital where they could give her gas. That was a 30 min drive away and a hassle. Fortunately, she was brave and had it done there. Well, neither of us was feeling very brave, but we survived and I took her for an ice cream afterwards. Saturday morning, her eye was so puffed up, that it barely opened. However, she was of to dancing and is on the mend.

I had a huge nap yesterday to de-stress wrapped up in my doona with the electric blanket on.

Well, I’m runnning out of time to post this. So, I’ll head off now.

Hope you’ve had a great week.

After yesterday afternoon, I’ve concluded that playing doctors and patients is over-rated. That as much I enjoyed playing it as a kid (and without any kind of innuendo), that it’s no fun in real life…especially when your child has had an accident. All of a sudden, you need to be the strong one, her rock, when you’re nothing but jelly. You can barely breathe. Yet, your alter-ego is supportive, loving, encouraging.She’s holding her hand, exuding calm, while you’ve completely freaked out.

Yesterday afternoon, our daughter was walking back from the station when she walked into a pole quite hard. Her glasses cracked and the edge of the lens sliced into the edge of her eyebrow. It was a nasty cut and needed immediate medical attention.

Meanwhile, I was stuck in the queue at the supermarket. All I needed, was a carton of eggs, but I’d grabbed a few things while I was there. Of course, every man, woman and dog had the same idea.So, that’s where I was when my daughter had her accident and a complete stranger found her and stopped to help.

When I rang her from the queue, her little voice was sobbing. Her glasses were broken. Her head was bleeding and she was at the medical centre. Meanwhile, my husband calls. Our son had rung him and said she’d been taken off to hospital.

Forget Friday 13th. Fridays seem to be bad luck around here. Two week’s ago, we were at Emergency with our son.

Unconsciously, I switched gears faster than formula one driver, Sebastian Vettel. Mummy was on the way, siren blaring. I was given a superhero’s welcome. Mummy was there to save her injured baby bird.

Ouch! The cut was nasty and obviously needed stitches and I started wondering about plastic surgery. Ow! My baby!

The staff at the medical centre were beautiful and so caring, looking after Miss like their own and the woman who’d brought her in, had done the same.

Yet, we weren’t going home yet.

Then, the doctor starts talking about “numbing” the area.

Note she doesn’t mention the “n” word and silly me starts thinking she’s talking about applying some form of cream you rub on.

We’re given our options. She could get stitched up there or we could could take her to Emergency where they could also give her happy gas to ease the process. She was also told that numbing the area was going to be very painful but it would only last 10 seconds. We’re talking a needle under the eyebrow.

It was a grueling couple of minutes while she decided and fortunately, she decided to stay put and be brave. I asked her if she had her slime with her, which she could hold to calm herself, andwas relieved that helped. Like fidget spinners, making and fidgeting with slime have become a craze.

Four stitches later, we were on our way. On the way to buy her an ice cream. I’m a firm believer in food therapy. Then, we picked my husband up from the station. He could drive home, and I could pass the baton. Dad was in charge, and I could fall in an exhausted heap.

This morning her eye was all swollen and she could barely open it up. It wasn’t too purple, but purple enough.

This incident has also highlighted the possibilities with her travelling a long distance to and from school. I am also wondering whether I should be meeting her at the station again. It’s only a short walk to the shops and you’d think nothing could happen, but evidently it can and it has. However, it’s also important for her to gain independence and stand on her own two feet.

Of course, things could have been a lot worse. It’s terrifying to think how close the gash was to her eye, but it wasn’t. Yet, it was still traumatic. I still feel shaky inside. Indeed, I had a big sleep today. Wrapped myself up in my blankets and quilt with the electric blanket on. I desperately needed to shut the world out for a bit. Put myself on the charger.

Have you ever had an experience like this as a parent? What is your story?

Night shifts at St Vincent’s were pure Adrenalin, but Saturday nights were insane. Yet, I couldn’t walk away. This was medicine. Real medicine.

The faces on the photos kept changing, but the anguish was always the same.

I refused to look at the photos anymore. Tried to zone her voice out. You could drown in Emergency,  if you didn’t hold a piece of yourself back.

This has been another contribution to Friday Fictioneers hosted by Rochelle Wisoff-Fields. PHOTO PROMPT © Roger Butolt.

Last Friday afternoon, we took our son to Emergency at our local hospital for what seems to be migraine auras without the headache. We were very stressed and were naturally concerned he might have a brain tumour or some form of serious neurological problem. However, we were told it wasn’t acute and so we found ourselves down at the waterfront having dinner at what we would call a street cafe, but it looks very similar to a diner.

St Vincent’s Hospital, Darlinghurst is right in the thick of things near Kings Cross in Sydney’s red light district. Thought you might appreciate reading about  a typical Saturday night in their Emergency Department.

I Also wanted to share a bit of real-life excitement here on the home front. Last Monday morning, we were expecting a visit from the host of our local breakfast show, Rabbit, who was popping around with a prize. Well, the prize turned out to be a surprise visit from his co-host, Julie Goodwin, Australia’s first Masterchef. They filmed it and posted a clip on their Facebook page. I thought you might enjoy hearing me, although my mother said they could’ve captured more of my serious side.Here’s the link