This week, we celebrated our daughter’s 10th Birthday.

So far the celebrations have been fairly low key as she’s just started at a new school and we’re still getting organised. 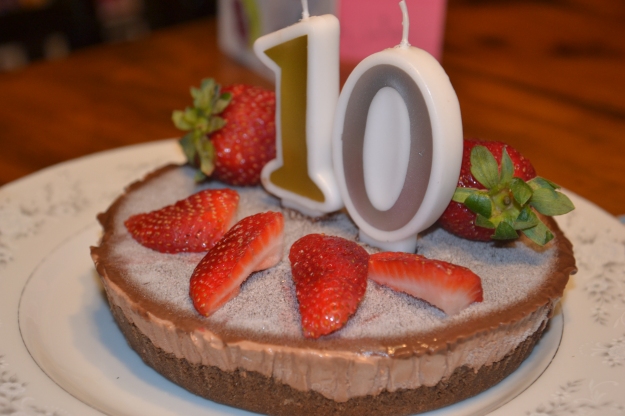 However, we did manage to get her BB8, the cute little droid from Star Wars 7: The Force Awakens. He’s a fantastic toy, which you control via the touch screen on your iPad. As he glides along the floor, he babbles away in electronic gibberish, similar to R2D2. Not only that. He even writes you text messages:

“Debris detected”. This was the waste paper bin.

So, just like we welcomed Miss into the world ten years ago, this week she welcomed BB8 into her world.

I don’t know what it is about him but he’s absolutely irresistible…even to a serious technophobe like me, who still goes into daily battle with the TV remote!

Perhaps, it’s because he’s fun…loads of fun. Fun is good.

But is being “fun” enough? Don’t you need to have some sort of purpose, goals, function, destination and ideally all of the above?

I would like to think so but maybe I’ve over-rated their importance. Perhaps, I should thrown away my Clark Kent glasses, roll aimlessly across the floor while chirping incomprehensible nothings and when my sweet little head falls off, just wait for someone else to put me back together again?

After all, is that really how to win friends and influence people?

I didn’t think so.

However, when you compare my popularity with that of BB8, you know who’s winning and it certainly isn’t Madame Smartypants! Oh no! Not at all!

So what makes BB8 so irresistible and please don’t just tell me it’s all just marketing hype. I haven’t been anywhere near any of that !@#$ and I’ve fallen head over heels in love with the little guy.

There has to be more to it. Something deep and subliminal and also a bit sneaky so you can’t quite work it out. It’s definitely not a conscious thing. At least, not for me.

Of course, I could go and research how his carefully chosen features somehow trigger some sort of psychological response. He is small, vulnerable and his electronic mutterings do sound quite a lot like a chirping baby bird. All of this might trigger some innate urge to protect him…especially if you, like us,  have pets in the house who could well decide that he’s their kind of toy. After all, if you were a Border Collie obsessed with chasing tennis balls, wouldn’t a robotic ball just be your idea of heaven?

So, BB8 was very astute to flag the dogs as: “Aggressive life forms detected”. 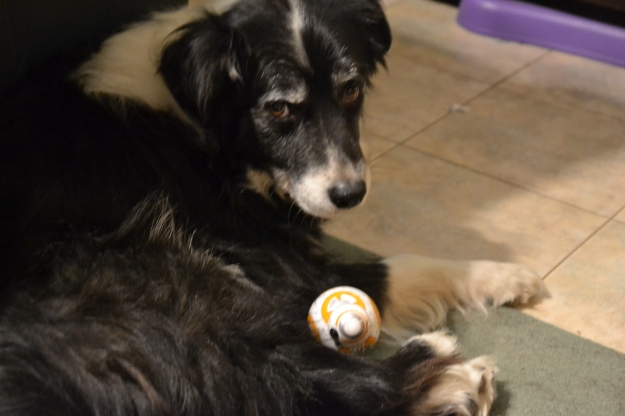 Meanwhile, my parents rang up to wish Miss a Happy Birthday. While I chatted with Dad afterwards, he mentioned how amazing it was that a kid could get a robot for their birthday. Then he added, almost apologetically, that when he was ten, we didn’t even have TV in Australia. With that comment, Dad suddenly aged and then I also remembered how the ice man used to get round in a horse and cart when he was a boy. That’s right. There weren’t electric refrigerators in Australia then either. As for computers, the closest thing could well have been the slide rule.

Miss on the phone to my parents.

I don’t remember a lot about what I received for my 10th birthday but my grandfather gave me an electric blanket for my 9th birthday. These were pretty new back in the 70s. Papa arrived at my party looking so chuffed with this huge box tucked under his arm looking like Santa (he wasn’t exactly slim!) I still remember my incredible excitement! My other grandparents used to send me $5.00 notes through the mail. $5.00 actually bought you something then!

All this reflecting wasn’t doing us any good. Although Miss was the one who’d turned a year older, it was actually my father and I who had suddenly aged, as we were brutally reminded that we’re not children anymore!

Indeed, it was far worse than that!

I have no idea how this came about but it was definitely a good time for my head to fall off so I could bury it in the sand.

Another birthday? I really just don’t want to know!

How about you? Do you have any special birthday stories? Funny presents? Then and now stories? I’d love to hear them!