What do you see when you look at this tree?

Initially, I saw the fork in the road but when I look at it now I see a very flexible, headless dancer whose toe is pointing up into the clouds. Mind you, when I came up with that image, I’d chopped the top off the photo on my laptop screen. or, maybe, the dancer hasn’t shaved her legs?

Unfortunately, I also noticed this tree isn’t looking very healthy.While it is deciduous, it’s neighbours are all sprouting Spring leaves and there isn’t so much as a bud on this one. I’m hoping my suspicions are wrong but is this tree deceased? 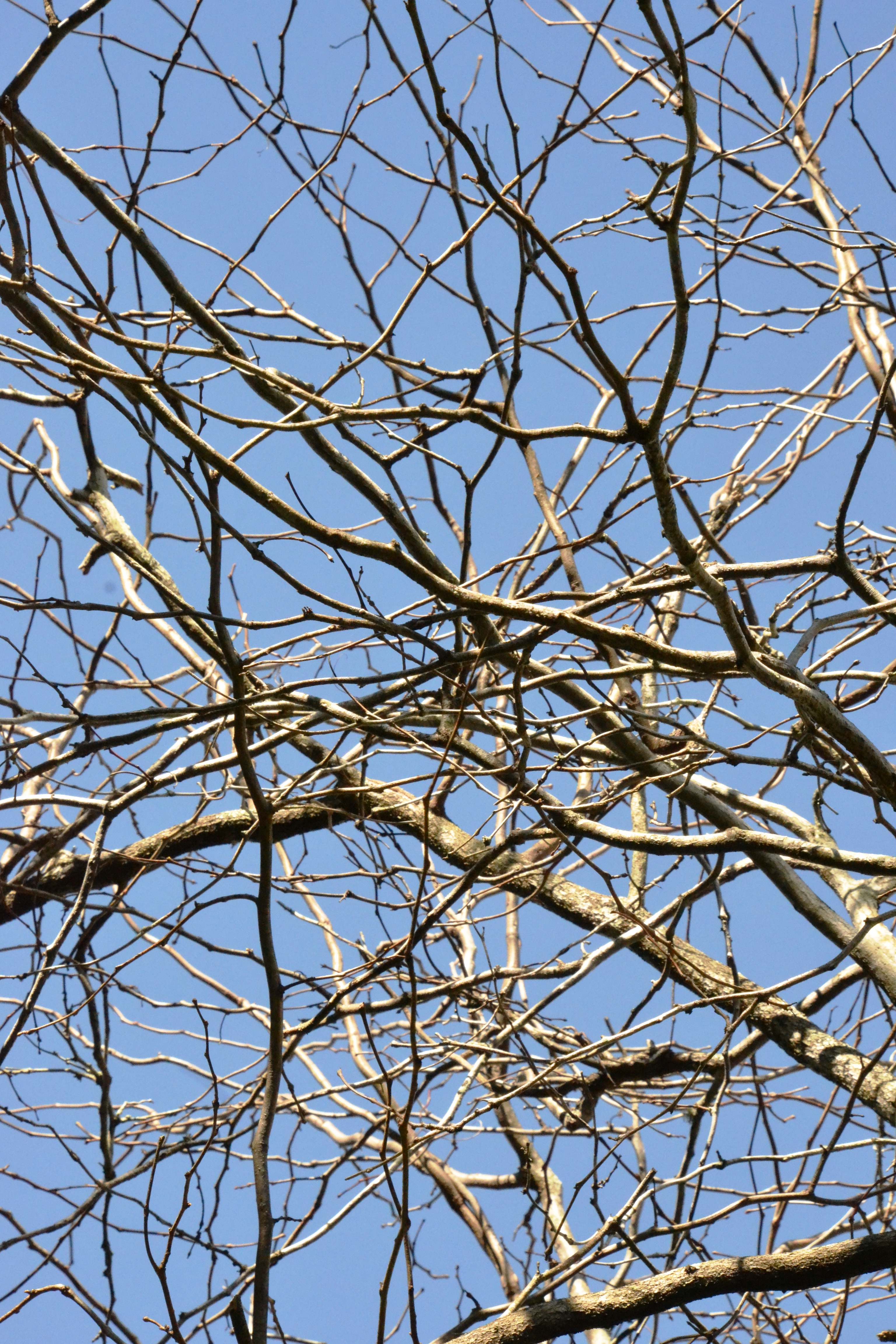 My Pathway is Lost in a  Jumble of Twigs. Where am I going?

Meanwhile, looking further up the tree, I spotted “chaos central” where there is no clear-cut fork in the road… the A & B options. Rather, these twigs graphically portrayed:

There are no patterns and no pathway through. No exit from the maze but at least there is no minotaur but that doesn’t mean there isn’t a spider’s next in there…a tribe of Huntsmen.

When you have complicated decisions to make, what do you do? How do you choose which way to go? Toss a coin? Phone a friend? Write about it? Make a list of pros and cons?

I use a range of these strategies but what I’ve finally come to appreciate the hard way, is that action outranks procrastination. That even if you make the wrong decision, that’s better than doing nothing at all. Procrastination is not my friend and yet…

Hey, I just went chasing up a quote to illuminate this post and this was the first quote I found and it was so about this tree. It must be a sign:

“Never cut a tree down in the wintertime. Never make a negative decision in the low time. Never make your most important decisions when you are in your worst moods. Wait. Be patient. The storm will pass. The spring will come.”

Perhaps, this tree should be renamed: “The Philosopher’s Tree”. Well, it’s certainly got me thinking and fired up a few brain cells. Dare I say, cleared out some “dead wood”?

Surely, there’s life in the old tree yet!

I don’t know about you but most of the time, I miss the huge fork stuck right in the middle of the road and just keep driving.

With my head up in the clouds or all my thoughts wrapped up in some creative project, it’s not surprising. I’ve been accused of living in my own little world…my own bubble…often enough.

This week, on the other hand, the fork was so big…so glaringly obvious that even I couldn’t miss it.

In my last post, I wrote about my daughter wanting me to take up physie. After she suggested we go roller skating together, I’ve since realised that she just wanted us to do things together and so I’ve been let off the hook.

So while I’ve scratched physie off the list, going through those thought processes made me realise that I really need to pick up some form of regular exercise. Exercise is quite problematic for me so choosing something suitable isn’t easy.

Well, the very next day, I was driving home and I saw a huge sign in front our local community centre: “Beginner Tai Chi Classes”. I couldn’t believe it. It was like that sign was put there just for me and I knew it. The classes are even on during the day at a very convenient time. Moreover, just as I was wondering how I could possibly remember the phone number, I realised that it was only two digits different to our phone number. How easy was that?

When things are meant to be, they are really meant to be. Everything comes together so smoothly without any effort like a huge enormous present just left on your doorstep. Freaky!

Today, I even called the number. That was an achievement!

We all know that it’s one thing to see a sign. It’s another thing to know that glaring neon sign was put there for you. But it’s a huge, enormous step to actually pick up the phone and make the call!

Now, I’m on my way only I can’t get there for two weeks. This is a serious hurdle. Everyone knows that when you close the deal, you need immediate action…no time or space to back out and reconsider…or forget.

I have to remind myself that I am committed to doing anything to improve my health and when I say anything that means everything. No holes barred. It means being 100% focused, which for me is going to be almost impossible considering I’m spread pretty thin at the moment but I can only do my best.

If Tai Chi only lives up to half its claims, things will be looking up. The Australian Tai Chi website suggests:

‘From a psychological point of view, Tai Chi helps release emotional tensions, increases concentration and awareness and decreases stressful psychological and physiological reactions… One becomes more centred, more at peace with oneself and less subject to outside influences.” http://www.taichiaustralia.com.au/TaiChi/Benefits.htm

After some of the clashes I’ve had with my son lately, being less affected by outside influences sounds absolutely fabulous!!

Tai Chi will be a dramatic shift for me.

For anyone who knows me, the thought of me doing anything relaxing that requires silence, concentration and no talking, is mission impossible… a complete joke. I even manage to strike up in depth conversations with my dentist during root canal therapy. I get restless waiting for trains. I just can’t sit still. I’m always moving, talking, thinking, planning, pondering. I have no idea what it’s like to just BE!

I need to find out! This really could be radically life changing. I know that. I need to keep reminding myself of that like a mantra so I’ll really take it seriously:

Rowena you are going to go to Tai Chi.

You are going to go to Tai Chi.

You are going to go to Tai Chi.

I know I’m sounding very serious and committed to this new direction but I’ve had very good intentions in the past. I’ve had the proverbial fork rammed right up my nose and yet still I’ve managed to ignore it. That takes serious effort and real commitment. 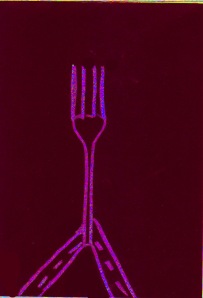 Last year, I had every intention of getting into yoga and meditation. One afternoon a week, I used to take my kids to swimming lessons where I chatted poolside with a yoga instructor. If ever there was someone who needed to do yoga, it was me a year ago. Despite all these good intentions, I never quite got there. I even wrote a poem about these good intentions…about how you find the acorn. Put it in your pocket with every good intention of planting it but the poor old acorn gets left in your pocket. Goes through the wash. Gets left by the bed. It goes on a grand royal tour but never finds its way into the ground.

That’s me. Great intentions but I struggle with implementation!

But that’s the old me. This is the new me and the new me is working overtime to convert good intentions not only into concrete actions but into life changing commitment. Change is all about the long-haul to be effective….perseverance in other words!

I am so good with all this motivational talk stuff but now I have to walk the talk or in this instance…Tai Chi it!

I am so determined to follow through on this, which is going to be difficult. As I said, I can’t get there for the next few weeks. It is hard enough to start a new path, especially one involving exercise but how can I possibly stick with it when I can’t get started straight away? This is going to take some serious willpower. Determination or perhaps a huge sign in my diary. “Tai Chi starts today”. I have to keep reminding myself.

This brings me to the following question… “If we know what we should
be doing something, why don’t we just do it? Why don’t we stick with it?

Does it mean we haven’t really decided? We still have a foot in both camps? Are we just lazy? I’m sure there is some fancy scientific equation for all of this. It might be Newton’s Law of Inertia? I like a law of inertia, by the way. I can be very inert at times although
you’d never know it. Everyone always comments on how I never stop but perhaps that is also a form of inertia. Bouncing around not doing the things you really ought to be doing.

Avoidance was a great thing in the days before we found out about brain plasticity. You could just decide that something wasn’t your thing and be done with it.

Now, we know that when we avoid something, that part of our brain is actually shrinking, putting us under enormous pressure to perform. Nobody likes the idea of a shrinking brain…especially when it’s your own brain that’s wasting away!

Avoidance isn’t the end of it either. When you avoid something, your brain shrinks but when you overdo it, your brain produces this superhighway of cabling. So you can’t just go and have a panic attack and get away with it anymore either. You have to be calm….otherwise your brain will look like an LA freeway with layers and layers of criss-crossing freeways looping around and around each other into a great big tangled knot of fear.
This is all very scary stuff.

That’s why I have just put a glaring note in my diary. Tai Chi starts today…Well make that the 12th of September. It’s written in red pen and I’ve committed myself with the World Wide Web as my witness. Now, I really do have to go ahead and do it.
Just two weeks to go…

Of course, as soon as I put the note in my diary, a meeting changed but it has brought things forward a week but put in a gap. Now I’m now wondering whether I should just wait three weeks so I can just get into some kind of rhythm. No Rowena. Don’t wait. Get started. This is exactly the sort of thinking that killed off yoga.

A journey of a thousand miles begins with a single step.

I wonder if he did Tai Chi…

How do you overcome procrastination? I’d love to hear your comments.