Welcome back to Bilbo’s Dog Blog.

Since I last blogged, I’ve finally been crowned: The Ultimate Ball Chasing Champion of the Universe!

Quite an apt title really, even if I did kind of award it to myself. That said, I did get quite a bit of assistance from Lady. She’s great with publicity, being  one of those extroverted types always trying to jump inside someone else’s skin. Frankly, I’m more than content inside my own. It usually even takes me awhile for me to warm up to a pat from visiting friends…even when they’re coming to feed me.

Yes, I know you probably wrote me off as yet another one-post wonder… like so many other dogs. However, being an entrepreneurial dog in my own understated, Border Collie way, I decided to give this blogging thing a bit of a whirl. Unlike others of my species, I can see the benefits of extending my sphere of influence far beyond the local telegraph pole and onto the world wide web and beyond. After all, dogs have been in space before so I’m not going to let some small world, backyard outlook stop me from spreading my paws and paw prints.

Indeed, I can just imagine looking up at the moon from my kennel on a dark cloudless night and seeing my paw print up there… How amazing! What’s more, it won’t get washed away like down at the beach. My paw print will be there for eternity. That’s forever and ever and ever!! 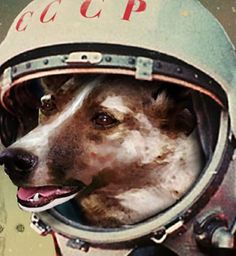 Laika the first dog in space. While in many ways my hero, she was killed in the name of science. As I’ve said before, humans need to pay more attention to the Golden Rule.

Hmm…The moon is an intriguing kind of place. Perhaps, one day dogs will even live up there but we’ll certainly look funny wearing one of those space suits with a goldfish bowl over our heads but I don’t know how we’ll ever manage to eat let alone chase a ball.

Anyway, I know you probably thought I was showing off  in my last post. Even though I am a good dog, this bravado was definitely out of character. Being a typically mild-mannered and understated character who doesn’t go jumping all over complete strangers or whacking other dogs in the face with their over-exuberant joy, I usually don’t advertise.

I also have to be a bit careful about what I share online. Sadly, way too many dogs and humans lump “good” in the same category as “nice”. Personally, I don’t have a problem with that. However, as strange as it might seem, being “nice” is somehow a bad thing attracting many  haters. Unfortunately, this can become quite a problem and even a threat to your life.

Even though I’m a highly intelligent dog whose abilities have been honed through countless generations of highly selective breeding, this aversion to niceness remains another one of life’s unsolvable mysteries. So, if you can work that one out, I’d really appreciate an explanation!! After all, aren’t being “good” or even”nice”  meant to be virtues? Wise and noble character traits that should be at the top of everybody’s shopping list along with the dog food? (Mind you, even dog food seems to slip off their shopping list at times!!)

Anyway, I’ve already told you that I’m good at being good but that’s not my only strength.

I’m also particularly good at being persistent. Mum doesn’t know that I can read but when I was just a wee little pup, I read this on her fridge:

Nothing in the world can take the place of Persistence. Talent will not; nothing is more common than unsuccessful men with talent. Genius will not; unrewarded genius is almost a proverb. Education will not; the world is full of educated derelicts. Persistence and determination alone are omnipotent. The slogan ‘Press On’ has solved and always will solve the problems of the human race.

Being a Border Collie, persistence is in my blood. After all, how do you think generations of my kind have been rounding up all those silly sheep?

Since I don’t exactly have access to any sheep in the city and rounding up the kids is even beyond my genius and skill, I’ve applied all that generational expertise and breeding to the fine art of rounding up my tennis ball. Indeed, I’ve become something of a ball herding champion. Indeed, Lady suggested I should call myself: Bilbo the Ultimate Ball Fetching Champion of the Universe. As much as I am adverse to too much publicity and like to keep a low profile, I reluctantly agreed.

My dedication and persistence is so intense that the humans always wear out long before me. They have no stamina whatsoever. Indeed, I usually have to wait for some unsuspecting visitor who doesn’t have their own dog to turn up. They’re usually most obliging. At least, for awhile!

I might not be able to leap tall buildings in a single bound to catch my ball but I do have some very impressive manoevres. That is, despite getting on in years and acquiring these rather generous love-handles. My increasing girth has complicated things a little.

While my career prospects were certainly looking very good for awhile there, even The Ultimate Ball Chasing Champion of the Universe has some limitations. While I can leap in the air with great agility all things considered, I hate getting my paws wet. Indeed, for a long while, I simply refused. No negotiations or even  a “go see my agent”!!

Quite a few times now while I’ve been training over at Palm Beach, my beloved tennis ball has fallen in the water.

Bilbo watching his ball drift out to sea.

The first time it happened, my entire body went into shock and all four paws were frozen to the spot. Only my eyes were moving, doggedly fixated on my ball as it rapidly went South with the rising tide. If you have ever witnessed a true ball chasing champion, you will appreciate my distress…such angst! Oh my goodness! It was almost like watching my dinner drift out to sea.

Almost mocking my terror, the family calls out: “Where’s your ball, Bilbo? Go and get your ball!”

While I’m combusting with horror, Mum has no sympathy at all. Instead, she’s doing her usual paparazzi thing and  glaring at my distress through the camera lens.

“This will make Funniest Home Videos for sure!” She calls out.

Nobody, not one member of the family, was trying to help me. They were just making fun of me as my heart was tearing in two. Did I actually love my beloved tennis ball enough to wet my paws and swim out to save it? Did it mean that much to me? Sure, they  knew my commitment and perseverance bordered on obsession but would it be enough to push me over the edge of my fear? 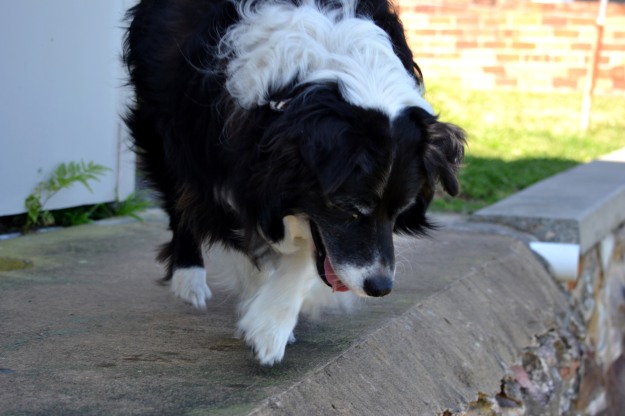 The kids just laughed and my heart sank. They could have easily jumped into the water and come to my rescue or even pulled it out with their precious fishing net. At least then, they would have caught something more than stupid seaweed. Something precious and as much as they keep saying they love me, this would have been the proof. A dog needs more than a pat, you know.

Treating  others as you would like to be treated, definitely meant getting my ball. No doubt about it.

I was an emotional wreck. My precious tennis ball heading out to sea and my family…my precious, beloved family, laughing in the face of my misfortune…and even taking photos, film and selling it off to a TV show and all. I was disgusted.

Like so many other rules, it seemed that The Golden Rule only applied to others and not to themselves!!

Anyway, they finally got with the program and fished my ball out with the broom.

Finally some assistance. Miss puts Bilbo out of his misery!

At least, they rescued it that time.

However, they now know my Achilles heel and they seem to take great delight in throwing my ball in the water…especially when my persistence is right at it’s peak and they know me well enough by now and that I’m not going to jump in after it. I don’t need to. Eventually, once all that water goes away, my ball is usually waiting for me on the sand. At least, my beloved ball has some concept of loyalty!!

As I’m sure you can appreciate, it’s not easy being The Ultimate Ball Fetching Champion of the Universe but it could always be worse.

I could have been a cat.

PS All this ball chasing can make a dog rather hungry. So, anybody wanting to support a future champion, can please send bones through to this blog. I’m not too sure how you convert them from images into something I can eat yet but as I mentioned before, I can be extremely persistent. You just ask my Mum!!

Note from Mum: Today, Bilbo’s powers of persistence even proved too much for his ever-faithful tennis ball. Unfortunately after yet another misguided throw, it ended up in the water and actually sank. Turns out excessive love and persistence had eternally punctured it’s soul.