As much as I’d love to have you over for coffee tonight, you might want to reconsider. It’s so cold that my fingers are numb. Of course, it would help if I accepted that it was still Winter, and that turning on the heater or putting on a jumper would be a good move. It’s evening and currently 11°C or 52°F.

Rosie with her tennis ball collection on my laptop.

Before I proceed, let me just introduce you to Rosie, our black and white Border Collie x Kelpie, who is staring straight at me with dogged persistence. She has a serious fixation with chasing balls, sticks or anything which could possibly launch through the air with her in hot pursuit. Rosie’s been parked in front of my chair for hours patiently depositing fragments of stick on my keyboard depositing fragments of sticks and tennis ball on my keyboard, and wondering why I haven’t seen them. Indeed, the pile is growing and she’s just upped her campaign and brought me a forbidden wooden peg. You should see the focus on those eyes and the highly strung tension in every cell of her body. She can maintain this pose for hours…and hours. I’m ignoring her more than usual tonight. Wonder if she thinks I’m broken? Or, perhaps she’s concluded I require more training… She certainly hasn’t given up trying to motivate this comatose human. She is the personification (or should that be dogification?) of persistence.

Sporting my new haircut at the local waterfront.

My big news this week, is that I’ve finally had my haircut. While I acknowledge that for much of the population having a haircut is a non-event, for me it’s more of significant and I’m out there ringing the brass bell.  Forgive me Father for I have sinned. It’s been around two years since my last haircut, and that rushed ponytail or makeshift bun have been heaven-sent. I know it sounds terrible now I’ve actually reflected on my crime and the horrors -of “letting myself go”. It’s just that it takes a lot of effort, not to mention money to maintain the facade, and my prime focus is more on what goes on underneath something money can’t buy. 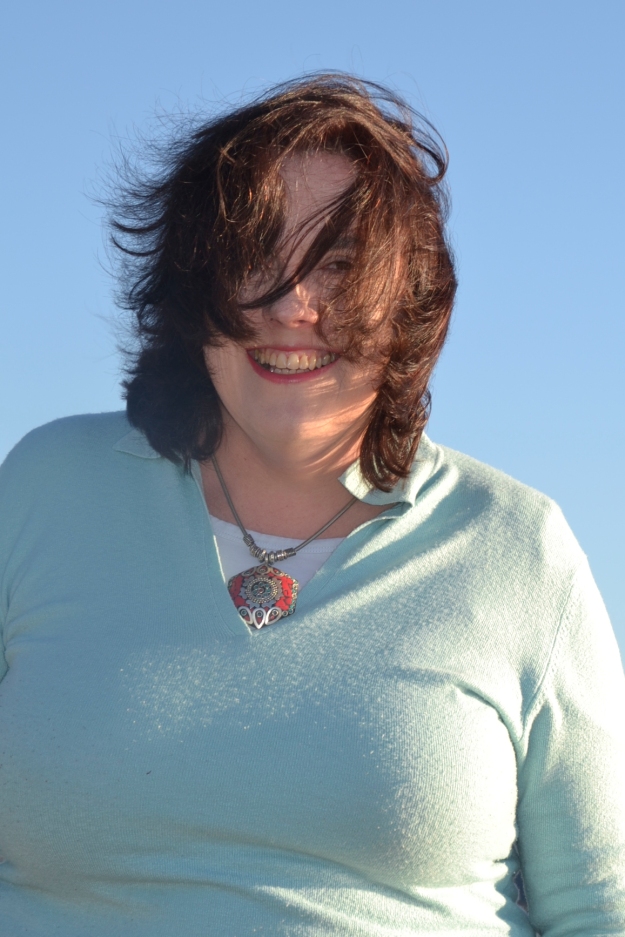 Trying to get a photo of my new haircut…the wind showed no respect and kept blowing it around.

After my haircut,, I headed back down to Terrigal Beach for a Fisherman’s Basket and thought my hair hair was about to fly away…so much for respecting my new haircut. However, I was grateful to find a parking spot. It took quite a tour to find one. What? Did they know I was coming? Obviously not.

Last week, I mentioned that I was reading Raphaelle Giordano’s  French novel: Your Second Life Begins When You Realize You Only Have One. This inspirational book is a hard creature to categorize. While it claims to be a novel, for me it reads more like a memoir, which is perhaps the ultimate tick of approval for any novel. After all, they’re supposed to feel real, and lure the eager reader into their web.

However, most novels don’t include action steps and writing post-it notes to change your life. Fill the void surrounded by all the trappings of success, supposed happiness, dotting the i’s and crossing the t’s.

I decided to take on these challenges myself. Why not?

The first task was to throw out ten items. Me being me, I started musing to myself about what these ten things should be. Of course, I could follow the letter of the law and throw out ten bobby pins and cross it off. However, obviously to experience the full benefit, I needed to embrace the full spirit of the law. Ideally, I would’ve moved on the piano, car bed or table I’ve been meaning to sell or give away, but that wasn’t going to happen quickly. So, I found a sort of middle ground and the deed was done. Too much analysis was only going to lead to paralysis, something I knew too well.

In the book, simply throwing out these ten items launches Camille into a cleaning and renovation frenzy where she even ends up painting their apartment. Such monumental change seemed too good to be true. However, I’m also finding a renewed desire to straighten things up around here. As usual, all roads are leading to my desk and the kitchen table, which always end up as a layer cake of family detritus. Indeed, I have no doubt that there are even fragments of stick buried on my very desk. Clearly, when it comes to sorting all of this out, I’m up against it.However, I’m not aiming for clinical perfection. It is our home. We’re a family. Love, connection and relationships are what it’s all about. Yet, these diametrically opposed worlds collide in every home and we each just try to make the best of it.

Have you read any good books lately? Has anyone read the Jane Hawk series by Dean Koontz? I heard a great review this week, and am tempted to have a go. I don’t usually like reading series and am more of a non-fiction reader, but might give it a go.

How has your week been? What have you been up to? I hope it been great.

This has been another contribution for the Weekend Coffee Share hosted by Eclectic Ali. You’re welcome to come and join us for a cuppa.

Since every human and their dog is giving life lessons these days, I thought I’d share my latest little piece of wisdom.

Neglect your hair long enough and when you finally get it cut, you’ll look like an absolute movie star!

I should know. My transformation’s been so dramatic, I’m off to Hollywood. Move over Nicole! Trouble has arrived!

Not that I intentionally neglected my crowning glory. Indeed, after all the wows I’d had after my last haircut and being told I looked ten years younger, I can’t believe I let it go. Indeed, I should’ve booked straight in for my next appointment before I’d even left the salon. “See you in six weeks”, instead of turning up six months later.

Indeed, to be precise…why wasn’t it so?

How should I know? What makes you think I have all the answers? Don’t be silly! I was only given the questions. Someone else, only goodness knows where, has all the answers. That’s their responsibility.

However, there’s one question I can answer.

That is, why did I finally get my hair cut today when I’d managed to avoid it for so long?

Straight from the salon….an SLR Selfie. Not ideal!

I mean any sane, normal person gets their haircut for Christmas and for my role as Stage Mum. There was her big audition for The Sound of Music, her appearance in School Spectacular (albeit as a speck in a huge choir) and the end of year concerts. Aren’t I supposed to dress the part as well, darling?!!

Well, apparently my script got lost in the mail. Or, so I believe!

My hair was sadly and repeatedly neglected. Indeed, you could say that I barely even knew it was there but I’m sure I would’ve known if it wasn’t. At least, EVENTUALLY!

My justification is that if I could’ve dropped my hair off at the dry cleaners and picked it up that afternoon, I would have done it. Moreover, it wasn’t my fault that my hairdresser moved and I couldn’t quite find her again. As we all know, changing hairdressers is more serious than swapping lovers because nobody else quite knows how to cover up all those things you’re covering up in quite the same way. Do they?!!

Sorry! Yet again, I digress.

There is one very simple reason that I’ve had my haircut this week.

The ghosts of school years’ past. The kids in their old uniforms.

As we all know, you can ride your moral high horse through New Year’s Eve and renounce New Year’s resolutions. However, you can’t get away with such outright rebellion or   even apathy, when it comes to your New SCHOOL Year Resolutions.

You see, schools have not only invented reports to test the students and keep them accountable, they’re also for the parents. I’m not saying that you get marked when you do your kid’s project because as we all know, you didn’t do it. You let your kid sink or swim through their own efforts. All you did was provide a set of floaties, a life raft, a bucket hat and some sunscreen. That’s right. You might also have set flags up at the beach and gone on surf patrol. No! You’re definitely not that interfering parent!

No! It’s your job as parent to provide the optimal conditions for your kid to reach their ultimate potential and if you can give them a rocket boost along the way, why not?

However, while you might hear about parents’ hot-housing their kids, what you don’t hear about quite so much is how parents’ sabotage their kid’s future through neglect, disorganisation, mis-management and all the usual things you find in your average workplace or home.

I don’t want to be that parent.

I also don’t want to be that parent who has let themselves go either. Not that I need to be that fashion plate exuding wealth and success but there’s a happy medium.

Indeed, when the kids start at their new schools this week, we just want to blend in with the Joneses…no more, no less.

However, that in itself takes an incredible amount of work behind the scenes and definitely no dashing back into town the night before like we used to.

This afternoon as I was catching the train back from Sydney, I ended up writing about three poems about having the guts to believe in myself. Know I can do this because I can. I know I can! I am prepared. We are prepared and now all we need to do is make the final preparations. It’s not that hard. The kids have been going to school in some capacity for seven years. Although the schools have changed and high school is a whole new ball game, we can do this and I know it. I have to switch off that annoying little voice which keeps trying to undermine me and stand tall. I also have to stop it running completely amok throwing things all around the room and cowering in the corner. Let my stronger, more sensible self prevail.

So, I had my haircut. My new haircut may or may not win friends and influence people but it’s helped me feel better. More organised. On the ball. That has to be worth something.

Now, we just need to get the kids’ haircuts organised. BUT first things first…

I’m sure you know what I mean!

Or, perhaps your kids have never scratched their scruffy heads!

Something to look forward to…or maybe not!

Yet, these indestructible critters seem to be a hidden bonus of “community”. Hugging friends, feeling your child rest their head on your shoulder while reading a book and knowing the nits are on the march but reading on regardless.

If you have kids going back to school soon, I wish you all the best for the New School Year!

May the Force be with you!