It’s shaped like a Volvo and moves like a Volvo but the Iced Vovo is actually a biscuit. In Portuguese, “vovo” means Grandpa, which seemingly has nothing to do with the actual biscuit. After all my extensive investigations, I still have no idea what a “vovo” is. It just doesn’t have 4 cylinders.

The biscuit itself was first registered by Arnott’s in 1906 and their web site describes it “as a symphony in pink.” I don’t have anything against Iced Vovos, however, I’d hardly call them a symphony. After all, it is a fairly plain, subdued biscuit and its demure shade of pink  conjures up afternoon teas at the nursing home….nice but nothing flash.

For awhile there, the Iced Vovo was looking like a bit of a has been and just couldn’t keep up with the likes of the Tim Tam and Mint Slice. However, just when you thought it was gasping its last breaths, former Prime Minister Kevin Rudd brought the Iced Vovo out of the closet (or was that the pantry?) in his 2007 Victory speech:
“Friends, tomorrow, the work begins,” Rudd said.” You can have a strong cup of tea if you want, even an Iced Vovo on the way through. But the celebration stops there.”
Arnott’s subsequently sent a pallet load of Iced Vovo’s over to Parliament House and the Iced Vovo was back.

That’s a little bit of history.

Recently, Mum and my husband, Geoff, were discussing the Iced Vovo convinced that they weren’t quite what they used to be. Somehow, the icing wasn’t quite as spongy and had become quite hard. Mum and Geoff both like coconut ice so I could understand why they fancied the humble Iced Vovo but I couldn’t really comment on its finer subtleties. To me, they’re the biscuit you have when you’re not having a Tim Tam, Mint Slice, Monte Carlo, Kingston and it is possibly ranked just in front of Orange Creams…perhaps a tie with Scotch Finger Biscuits.

In other words, they’re not a favourite.

It’s never crossed my mind to bake Iced Vovo’s before. I don’t think I’d seen a recipe for them either. However, I came across one while sorting through some old recipes and thought I’d give it a whirl. I noticed that you have to melt pink marshmallows to make the pink icing and that seemed kind of fun. I’ve always loved toasting marshmallows on a stick over a hot camp fire. It’s quite magical really.

So let’s get started.

Making the biscuit part was pretty straight forward. I powered up the Sunbeam and everything went according to plan.

Then the fun began… melting marshmallows…Mmm! Yum! I had to melt the marshmallows in a saucepan with a bit of butter. My daughter and I loved watching the marshmallows melt away into a hot and sticky puddle and she loved doing the stirring. We added the icing sugar and it all came together well. Now things started to get a bit more tricky. I had to spread a stripe of icing on either side of the biscuit, leaving room for a stripe of raspberry jam in the middle. As much as I thought the kids would enjoy doing this bit, I was too much of a control freak to let them have a go. I had to do it myself…at least this time round. I had to get them right!

This was where the trouble began. You see, I’m more of a broad brushstroke type…an expressionist. I’m not really into fiddley detail. When it comes to things like colouring in, I couldn’t really be bothered staying within the lines. Boundaries are meant to be broken, challenged, extended, aren’t they?!!

It turns out with all these straight lines, that the Iced Vovo is actually quite a fussy little biscuit to make, requiring great attention to detail. That’s not my scene. To compound things further, as everybody knows, melted marshmallow is sticky, very sticky and quite elastic. It doesn’t just sit on the biscuit and stay put. It has a mind of its own. It’s extraordinary stuff really. As much as I like melting marshmallows over a camp fire, it’s quite a different experience having melted marshmallow icing stuck all over your fingers. It actually feels quite yucky in a way and I had to keep washing my hands. Perhaps I am a little bit fussy after all.

I also struggled to apply the marshmallow icing in perfectly straight lines and perhaps a ruler might have been useful but the coconut hid a few sins… so far so good.

Next, it was time to apply a GT stripe of warm raspberry jam along the centre of the biscuit. My jam had a few lumps of fruit, giving the biscuit a slightly blobby or even exuberant appearance depending on whether you want the Lady Gaga version bursting at the seams or something more demure. They do look quite indulgent from a distance with all that jam oozing out. 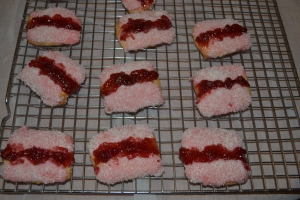 In the end, the results weren’t too bad. Actually, they were pretty fabulous but they were a lot more exuberant and irregular than the packaged variety. Anyway, what could I expect? A handmade biscuit isn’t going to look anything like something made by a machine. It’s going to have imperfections and irregularities which are, of course, part of their charm. That is a big reason for home baking… you don’t just want to replicate what you can already buy in the shops. Moreover, home made always tastes so much better as well!

The Iced Vovos were an instant hit with the kids. Jonathon’s biscuit had a huge gloop of marshmallow icing dripping down the side. He said: “Mummy, it’s like bubblegum.” That’s all he had to say. He was halfway through his biscuit by this stage and all he could manage was a thumbs up. Amelia loved them so much that she actually ate three for afternoon tea. She eats like a sparrow so that was a very positive endorsement. She won’t even eat my most scrumptiously scrumptious choc chip cookies so that was a glowing endorsement. I loved them and were a vast improvement on the commercial variety. I enjoyed mine with a cup of camomile tea in my butterfly teacup. Geoff loved them too but did point out that you couldn’t package these up. 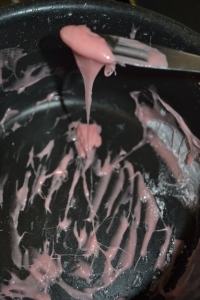 The last word, however, has to go to the marshmallow icing. When this stuff sets, it has some very interesting properties. The mixing spoon was literally glued to the plate and as you’ll see in the photos, you could hold the plate upside down and it didn’t fall off. I wouldn’t say it was superglue but it did a pretty good job. It tasted great too. Perhaps, there’s an untapped market there… marshmallow glue!

To Make the Biscuit:

Cool on the trays.