As part of an inter-agency operation, the Guardia di Finanza was staking out the notorious Bologna car park. It was said to be the change over point, for trucks trafficking young women from Croatia to the UK.

“Ze cargo good. Very good,” said the guy in the green pants, reportedly  Sergei Demodenko. The other man, known as the Kissing Assassin, was Luigi Pepperoni.

“Disgusting!” a female officer spat. “They can roast in hell.”

“But they are just the little fish. Talk is, this goes high up.”

Suddenly, the men peered up, and sped from the scene. Evidently, a tip off.

This afternoon, I intrepidly advanced into my teenage son’s bedroom and took off with his school folder to dig out the art assignment he had due, and evaluate the carnage. As you could perhaps appreciate, I need to be in the right frame of mind to take on his messy folder, but desperation called.

His assignment was on Australian Artist, Jeffery Smart . I’d heard the name, but despite having somewhat studied Australian art in the context of social history at university, I couldn’t place him. So, before I even chased up the questions for the assignment, I did the usual Google search and caught up.

What followed was several hours working through the painting with our son and also for myself. I don’t know whether you’ve seen what homework’s like these days in the post-Google Internet era. However, our son does his homework online and submits it to his teacher via Google classroom. This is very much “Beam me up, Scotty” territory to me. He still has exercise books, yet his learning is so interactive, and light years ahead of what we were doing. I left school in 1987 and I remember studying art history from a black & white text book, which hardly did anything justice. I don’t remember studying Australian art at all and discovering the likes of Australian Women artists like Margaret Preston and Thea Proctor, had to wait until university.

Art appreciation, also meant a trip to the Art Gallery of NSW in the city, not a Google search from your lounge chair.

We really were deprived.

Anyway, as we went through the questions, I found out that he had to write a 100 story about the painting. I was initially a bit baffled about what he should write, but then it suddenly dawned on this bear of little brain, that they were just asking him to write what I write all the time…a 100 word piece of flash fiction.

He hasn’t done something like this before to my knowledge. So, I thought I’d write an example to show him to help him formulate his own ideas.

This was much harder than expected. While Jeffrey Smart is an Australian artist, he lived in Italy most of his life and the painting is set in a car park in Bologna. After spending so much time researching, staring at and pulling this painting apart, I decided there was something like a people smuggling ring involved and these men were dealing in human cargo. So, i found myself needing to pick up a few words of Italian, find out a bit about their Police force and think up some kind of interesting twist for the end.

I do this every week for Friday Fictioneers. However, it’s never easy and there’s a huge part of me, which almost capitulates every week, when seeing the photo prompt produces a nasty case of writer’s block. I really do freeze and the words stop dead in their tracks.

Anyway, there’s a bit of a back story to this. I hope you enjoyed it and might I also encourage you to write something about this intriguing painting prompt and put a link to your effort in the comments below. I’d love to read it.

PS I just put 1 + 1 together and realized that 1992 was the year I was in Europe and that I actually went to Florence the year this was painted. That wasn’t long after The Wall had come down and Germany had been reunified. The Croatian War of Independence was fought from 1991 to 1995 between Croat forces loyal to the government of Croatia—which had declared independence from the Socialist Federal Republic of Yugoslavia. I remember that you couldn’t send mail to Croatia at the time…just the tip of a dreadful iceberg.

This year, there was no Easter Hat parade with all the school children singing: “Here Comes Peter Cottontail hopping down the bunny trail…” www.youtube.com/watch?v=0G6F0pyaT7c Both kids are in primary now and considered too mature for such childish things.

Yum! All that yummy Easter chocolate!

To add salt to the wound,  crime to end all crimes, the kids shot the Easter Bunny, Santa and the Tooth Fairy with one very effective bullet not so long ago. For years I’ve been telling them they had to “believe to receive” but seemingly weren’t listening. They weren’t happy when I didn’t leave any Easter eggs out.However, they hadn’t left any baskets out either.

Somehow, I don’t think eating a Lindt carrot quite qualifies for the Paleo Diet!!

Further breaking with tradition, we’re on holidays and so we didn’t make it to Church and even though we did try to find a service, we still missed out.

It’s also hard to think about the symbolism rebirth of the resurrection which is more in tune with a Northern Spring than Autumn in Australia where the leaves are changing colour and starting to die  as we head towards Winter.

In other words, our Easter was all topsy turvey and upside down. No regrets because we had a fabulous day. It just wasn’t how we usually spend Easter.

Yet, as John Lennon said:

“Life is what happens to you while you’re busy making other plans”.

However, while the kids were too grown up to believe in the Easter Bunny anymore, they were still keen for an Easter Egg Hunt and we invited the kids from next door over to join in the fun. We had a second hunt today and the rain hit just as the search began. Oh yes! Our scruffy Lady puppy dog snatched one of the eggs and tried making a speedy getaway as Geoff chased the dogs out of the hunting grounds. We don’t feed our dogs chocolate but we’ve only had Lady for about 6 months and she knows all about chocolate. She loves it and appears at the light whenever chocolate appears much to her disappointment. Chocolate, especially dark chocolate can kill dogs.

We were also thrilled that after two days of solid rain and predictions of more to come, that the clouds lifted and we woke up to bright, glorious sunshine and we were out the door to make the most of what had been “the view”. The dogs were particularly thrilled and as soon as the gate was open they sped down to the beach. However, it was high tide meaning they couldn’t get very far on foot and so we bungled them into the kayak with me and they certainly got more than they bargained. Bilbo’s lucky his claws didn’t get stuck in the plastic. He was very uncomfortable and not the courageous adventurer at all!! You’ll read more about that as the A-K Blogging Challenge continues under K: Kayaking with Dogs.

Kayaking with two dogs onboard certainly is an acquired skill, especially with Bilbo who hates getting his paws wet and prefers terra firma.

My parents came round for an Easter meal. While setting the table, I discovered the glass table top reflected the clouds and immediately grabbed the camera: 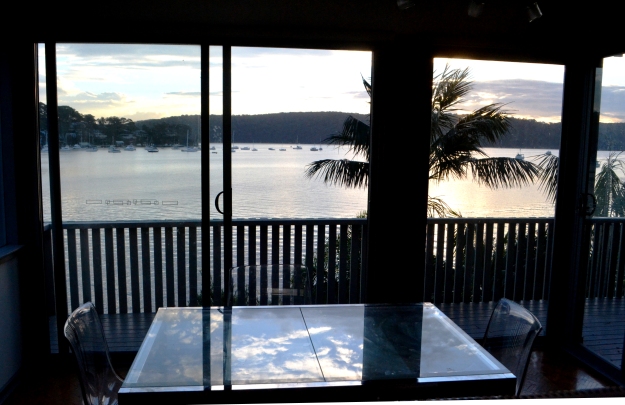 Sunsetting over Pittwater with the cloudy sky reflected on the dining table.

Despite wanting to keep this post simple, I couldn’t resist looking up Easter traditions around the world:

France: If you fancy some spring cleaning, head to Alsace in France: http://www.frenchmoments.eu/easter-in-alsace/

Germany: A beautiful German Easter tradition is the Osterstrauch. This is a branch or small tree decorated with hollowed-out eggs: http://www.quick-german-recipes.com/easter-in-germany.html

Latvia:When I was in infant’s school one of the Mums who came from Latvia taught us how to make coloured eggs boiling up brown onion skins to make the dye. As young child, I was amazed! Check this out: http://www.latvianstuff.com/Lieldienas.html 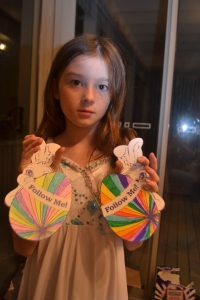 Preparations for the Easter Hunt.

How did you spend your Easter? I hope you had a wonderful day!

Anyway, we would like to wish you all a Happy & Blessed Easter reflecting on Christ’s resurrection while also enjoying all the fun stuff as well…Easter eggs, Easter Egg hunts and making all sorts of Easter arts and crafts.

PS Here are some interesting Easter curiosities from around the world: