Last week might not have been the worst of times but it certainly wasn’t the best of times either.

No matter how medical tests pan out, they still put you through an emotional and organisational wringer. Moreover, I won’t even mention what we all could have accomplished if we hadn’t spent an eternity on hold… waiting. That just adds stress on top of stress because you can’t help thinking about what else you could be doing if you weren’t still waiting. After all, didn’t you know? Life’s a beach!

So far the test results are encouraging but we are waiting for the final results. Make that still waiting!!

Anyway, whenever you are going through a trial, you have to do the whole ying and yang thing and somehow balance up the good and the bad. You need to look after your mental health as much as your physical health…even when someone you love is seriously ill. 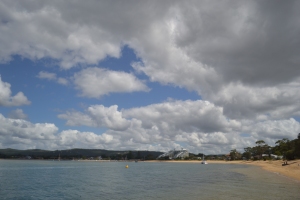 So after a rough week, we needed a great weekend. The kids were already been booked into scout and cub camps and were looking forward to extreme fun as well as pushing their physical limits.Geoff and I were off to Palm Beach together until fate intervened. Miss needed a taxi and so Geoff stayed home. I did reconsider Palm Beach but I really needed a break and we all know what the home front’s like. It’s a constant battle against an insatiable, demanding beast which is constantly sucking you dry. So as much as I hate to admit it, I took off on the Palm Beach Ferry looking forward to drifting off into a blissful state of suspended animation in Palm Beach and I wasn’t looking back. 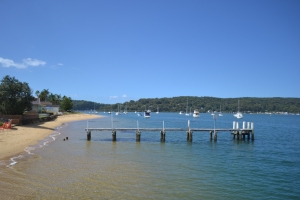 Meanwhile, on the way to the ferry, Geoff’s short straw was cut even shorter when his mobile rang and he was off to work for a few hours. What have I mentioned about Mrs Murphy’s Law?

So there I was at Ettalong Wharf about to set off on my own private adventure, which, as it turned, it wasn’t going to be all rest and recuperation, after all.

What I love about traveling or going out solo is that you can meet an amazing cast of characters you’d never meet otherwise. When you’re with the family or group, while it’s fabulous to enjoy each others’ company and do things together, you also become insular. Immersed on your own private island. But Rowie was out of her chrysalis and my wings were just about dry. This repressed social butterfly was about to take off!! 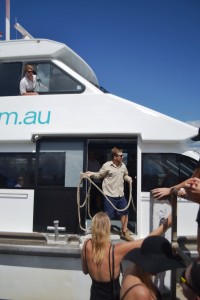 Before even boarding the ferry, I met a wonderful group of 20 somethings who made me their  Paddington Bear.  I didn’t even need to lure them with marmalade. You see, with my broken foot back in the boot again and staggering along with my walking stick and my bag, I didn’t even need a sign saying: “Please take care of this bear”. It was pretty obvious I could use a hand. My new-found friends chivalrously carried my suitcase onto the ferry and even invited me to sit with them in the crew section, among the privileged few, which I might add, did not include the buck’s party wandering around the ferry wearing green aprons. Suddenly, I was part of a mobile party and it was such FUN!!!! Surrounded by a kaleidoscope of outfits, fake and real tans and short skirts. Actually, make that short short or some instances, even short short short. It was time to  Party!!!! 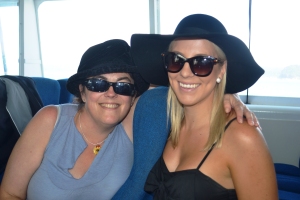 Fun and compassion…such a wonderful mix.When you’re having a bit of a rough trot, you don’t want all doom, gloom or even too much sympathy. There’s no better therapy than a laugh and experiencing an unexpected, spontaneous act of human kindness and the hand of friendship, especially from strangers from the distant galaxy of youth. It was just what the doctor ordered!

After all, don’t you sometimes get sick of being a grown up and I didn’t realise the Palm Beach Ferry could also be a time-machine. 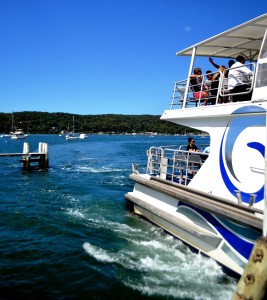 But my new found friends, weren’t just about partying, looking good and having fun. They were such caring, compassionate and thoughtful people who really touched my heart. They had time for me. Included me.They even carried my bag to the bus stop, which also involved a lot of trust on my part as well. That’s gives an insight into the bond we’d forged on a very short ferry ride. I know this meeting wasn’t a random thing. That it was destiny. Meant to be. Serendipity.

At this point, we parted ways as I waited for the bus but the party continued. Another gaggle of twenty somethings were spilling over the footpath and onto the road. Putting my “mum hat” back on again, I felt like shepherding them off the road and back onto the footpath, although I said nothing. I don’t think you needed any testing apparatus to know they’d had more than a few drinks and I could sense the Palm Beach locals would be eying off this unruly mob thinking “@#$% Coasties!!” However, at least these characters knew how to have a good time and as long as they stayed off the road, they weren’t hurting anyone.They were all heading off to Newport Arms, which is abut a 15 minute bus ride from Palm Beach. The Newport Arms is one of Sydney’s most popular hotels or pubs and is quite legendary. 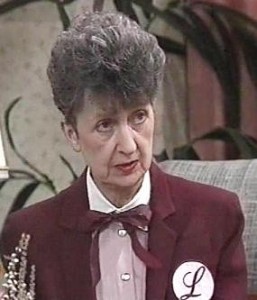 A disapproving Mrs Mangel from the hit drama series, Neighbours.

The bus pulled up and I sat opposite an elderly lady who was already sporting a few frowns and other disparaging expressions. If you ever used to watch Neighbours going way back to the beginning, there was Mrs Mangel and this woman was a white-haired impersonation a she sat in her seat so stiff and almost frozen,  The party revelers, including the bucks party, also clamber on board. By now, they were under the weather, rowdy and rambunctious. No sooner than the bus starts moving and the bucks start belting out iconic Cold Chisel songs, providing live, on bus entertainment. I loved it. Soaked up every minute of it. Great memories.

However, to say “Mrs Mangel” was looking “Uncomfortable” would be such an understatement. Evidently, she found the echoing sounds of fun and jovial happiness. as torturous as fingernails scratching down a chalk board. I could sense the pain in every cell in her body. It was etched across her face and she’s so incredibly uncomfortable. She yearned to get out of here. Get those louts off the bus so she could return to civilisation. She was really suffering in serious pain and looking across to me for some kind of understanding or even salvation. I haven’t made it to the hairdresser for awhile so the grey is showing but being more mature doesn’t make me a wowser. That said, I shouldn’t judge. I often struggle with loud noises myself but juxtaposed against everyone else on the bus, who were squeezing the fun out of life, it really looked like she’d swallowed a bag of sour lemons.

This reminded me of something an elderly friend once told me. She said that her husband had “decided to get old”. At the time, that struck me as odd. After all, he was in his late 80s and a returned serviceman, At that grand age, he was old. However, I am coming to realise that there is a difference between getting old and feeling old. Feeling old is a choice.My grandmother said much the same thing. That she’d look in the mirror and she didn’t know the old woman staring back at her. Quite remarkable really. At least, I used to think so until I started looking in the mirror and started seeing glimpses of photos I’d seen of my great grandmother looking back at me when I still feel 25 on the inside and I suspect I will feel forever young: www.youtube.com/watch?v=rQi8wEHMm5Y

I was barely on the bus and I was off, leaving the party behind as I headed for a weekend of silence, solitude and serenity alone at Palm Beach. Almost immediately, despite the animated screams from the kids playing in the pool next door (this time it was my turn to feel somewhat tortured), I fell into a deep, comatose sleep and began to dream. 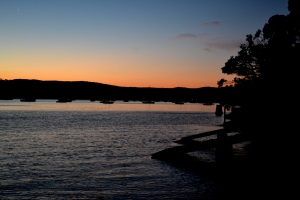 When I finally woke up and the sun had all but set, I realised that the screaming had finally stopped. I’m not talking about the kids screaming in the pool but the screaming in my heart and in my head. I had only been vaguely conscious of the scream before but now that it had stopped, I could hear it so clearly and feel its pain. Yes, I’ve been screaming, silently, unconsciously screaming for some time but it was only now that it had stopped that I could ironically hear myself. The touch of human kindness on the ferry had released me. Set me free. Probably not forever, it was only intermission but it brought relief.

Now, I could feel myself slowly starting to stretch back into my full height, gaining strength and being able to stretch my wings enough to fly, instead of being curled up into a self-protective ball so I could just survive.

It was then I remembered a childhood song, which Google (my not so secret best friend) reminded me came from Romper Room: https://www.youtube.com/watch?v=aIRu8-5Nyek

reach for the sky

I would love to hear how the love and compassion of a stranger has touched you. Please share!