Two days, ago when Australia Post left a delivery card in my letterbox for a mysterious, missed package, I was stumped. As much as I wracked my brain, I no memory whatsoever of any outstanding purchases and thought that perhaps my aunt had sent me a random gift. She does this from time to time.

Anyway, when I made it into the Post Office yesterday to pick it up, my heart paused for a moment as the enormity of the package sank in. Inside, carefully protected inside its bubble-wrap blanket, there was a small metal tin. When I opened it, there was a small envelope and inside that, were a handful of sunflower seeds. 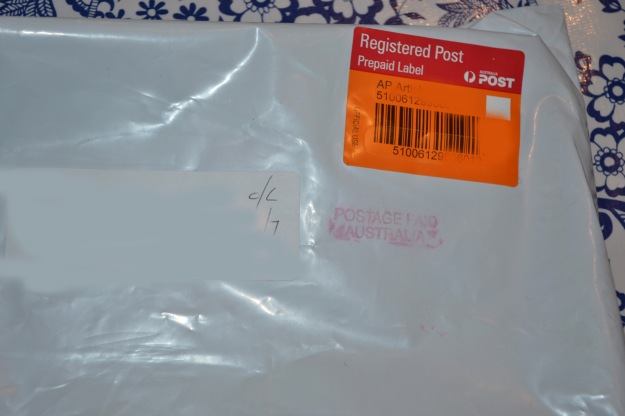 The seeds arrived in rather understated packaging. That said, it was Registered Mail.

A handful of exceptionally precious sunflower seeds, which have their origins in those Ukrainian sunflower fields where Malaysian Airlines Flight MH17 was brutally shot down, “murdering” all on board.

These sunflower seeds were, in effect, the offspring of the sunflower seeds collected by the Sydney Morning Herald’s Chief Foreign Correspondent, Paul McGeogh and a five-time Walkley Award wiining Photographer Kate Geraghty, while they were covering the incident. Rushing round with the kids and on our way to Sydney for a medical appointment, I respectfully put the package in the boot and decided to open it today while the kids were at Vacation Care so I could give this moment the respect that it deserved.

I have to tell you just how incredibly touched I was by receiving this precious gift and also how much love and heartfelt respect went into putting this package together. I assume that most of the people who requested the seeds, were actually family and friends of those who died in the tragedy and so the package was put together accordingly.

It was beautiful and it’s simplicity spoke volumes!

The first thing I noticed when I opened the envelope, was a small, silver, metal tin: perfectly simple, stainless-steel and almost elegant. Even by itself, it almost told a story. I was intrigued. What was this? What was inside? I was completely mystified.

Then, once I opened the tin, suddenly I knew. 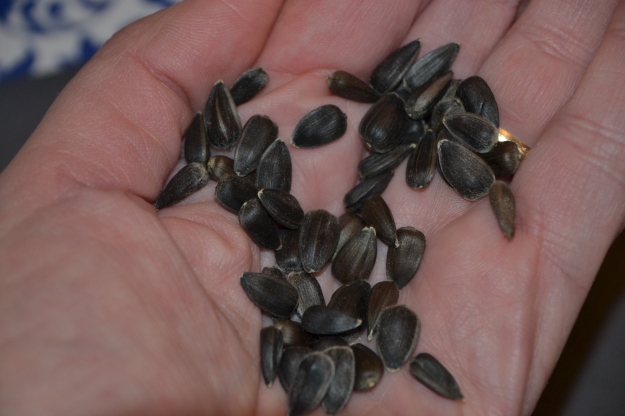 As a little person of no consequence but a big heart and a deep sense of connection to those who had lost loved ones on board, I’d requested some seeds and for some reason, I was considered worthy. I was incredibly touched and really appreciated that someone else “got” how powerful the love of a random stranger can become. While it might not make sense, it can become an incredibly powerful force and that somehow we need to harness that if we are ever to have a hope of overcoming such awful deeds of destruction. 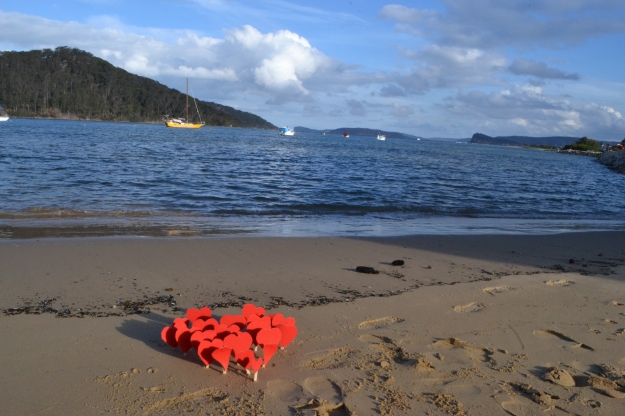 Our tribute to the victims of Malaysian Airlines Flight MH17. We posted these hearts out to their schools and communities where we could.

Moreover, it reflected my belief that making a difference isn’t just about the big and powerful doing something. Indeed, it’s even more about the little people joining together and marching those feet somewhere together for good, instead of evil.

After all, there are far more little people than big wigs in this world and if we could only join together, I know we could move mountains!

Carefully packaged inside the tin, was a small, very plain envelope containing the seeds. It wasn’t flashy or covered in pictures but again, incredibly simple. No doubt, it came from Quarantine where they’d planted the original seeds, tested them for bugs and viability before releasing their “offspring” for distribution. They reminded me of how my grandfather, an avid backyard fruit and veggie grower, used to collect and store his seeds in similar small, Church offering envelopes.

In addition to the tin of sunflower seeds, there was also a photo of a huge sunflower head standing tall over the mass of green floppy leaves and dotted with golden faces. This photo was taken by Kate Geraghty on location after the crash. It is a simple photograph but that sunflower head really towers over the field like the sun and it’s petals radiate out like beams of light.

What is it saying?

On one hand, it says that even in the midst of darkest tragedy and despair, that there is always light. That the sun hasn’t set completely. That there is hope. This is obviously a very hard call for those who lost loved ones in the tragedy.

It also says that you can choose to completely overlook and ignore evil in our world and just bask in the sunshine and “turn a blind eye”. While I’m not a professional photographer, I am still a photographer and I know how you can manipulate a shot and zoom in on one very small part of the overall picture and make it loom larger than life. We all know that just metres from where this photograph was taken, there was all the brutality of the crash site and yet in this photo, there isn’t even a hint of a cloud in the sky.

To me it also offers some comfort perhaps to the families of those who lost loved ones there. We are all familiar with those awful images of carnage which appeared all over the news but the last thing those people saw perhaps was those beautiful fields of sunflowers. They offer a sense of love and respect amidst absolute devastation.

“In order for evil to flourish, all that is required is for good men to do nothing.”
Edward Burke.

Finally, I am personally deeply, deeply touched that Paul McGeogh and Kate Geraghty stopped, paused and collected those seeds. That they responded so compassionately and maybe even with the faintest sense of hope, despite such cruel despair. That they wanted to give bereaving loved ones something to hold onto when they had lost all but the very beat of their own heart. The media runs at such a frenetic pace and we must also remember this was a war zone where even removing a few seemingly harmless sunflowers would have meant placing their own lives at risk. Such altruistic courage and bravery speaks more to me than a Pulitzer Prize. It does. Since then, they have been part of a lengthy process to get the seeds through quarantine and to ensure they could grow. Apparently, sunflower seeds need to be picked at the right time to be able to germinate.So, even getting the sunflowers through quarantine and mailed out, was a story in itself.

There were also detailed instructions not only about how to plant your sunflower seeds, but also how to grow, protect and nurture them and re-grow them year after year. That is just as important as receiving your seeds. You need them to flourish…especially given those precious loved ones they represent.

Perhaps, what meant most to me personally, however, was a signed note with a beautiful, very heart-warming message: “May your sunflowers bloom”.

It is the middle of Winter here in Australia. My fingers are cold, freezing and turning a shade of purply-grey while I type. This week, the weather has been so dull, cold and gloomy with a smattering of rain and the sun has certainly gone on what feels like an extended vacation, even though we’ve had a pretty sunny Winter. I have been fighting a cough which sounds like I’m in my last death throws, even though it seems to be nothing sinister. This has truly rattled the kids who, instead of coming to my rescue, have you could say: “exploded”.

After all, you may recall that I live with a severe life-threatening auto-immune disease and have had a few close calls. Naturally, this is what makes me empathise with people who lose loved ones as even though we have been blessed or lucky so far, I’m doing so much better than it could have been.

So, when I read that simple line: “May your sunflowers bloom”, it went way beyond seeing those sunflowers growing in out garden and seeing their bright, sunny faces smiling in my garden, I was thinking about all that is good in our world and naturally, my kids. 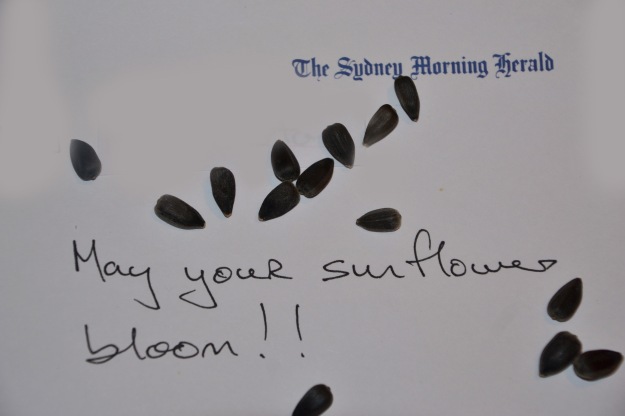 These words meant so much to me today. Not just because I desperately want to see those actual seeds grow up and flower, I want my kids and all our kids to do the same.

May my sunflowers bloom…Yours too!

By the way, I haven’t decided where I’m going to plant this first generation of sunflowers so I’ll keep you posted. Need to be sure they’re not only going to grow but will also flower and produce more seeds. Then, I will set aside part of my garden and plant the next generation of seeds. I have developed a bit of a brown thumb of late and definitely can’t let these seeds to die.

Love and blessings, especially to anyone who was touched by this horrendous tragedy. You are in our hearts! 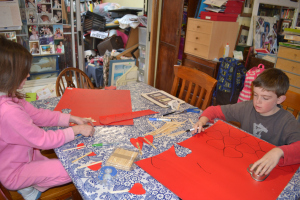 Our children making the hearts we sent out. We wrote: “we send you our love” on the sticks.

By the way, coincidentally, my sunflower seeds arrived on 7th July, 2015 on the 10th Anniversary of the 7/7 London’s worst terrorist bombing. My heart goes out to all affected by that event as well as those in places all around the world, especially Tunisia. Since MH17, even Sydney has been rocked by terrorism. These awful events aren’t just headlines which flash by for those directly involved and they stay with them for life. I was particularly struck by the words of Emma Craig, who was just 14 when she was caught up in the Aldgate blast. She wept as she gave a tearful address to the crowd, telling those assembled: ”The fact is it may not have broken London, but it did break some of us. Sometimes I feel that people are so hell bent on saying terrorism not breaking us that they forget about all the people who got caught up in it.’