Yesterday, I visited the Sydney Jewish Museum to see two overlapping exhibitions: Anne Frank- A History for Today and Otto Frank’s Lost Letters. This was naturally a deeply moving experience and it was wonderful to recapture the intimacy I shared with Anne Frank as a 13 year old and revisit it now as Mum to my  13.5 year old son and almost 10.5 daughter, who are about to step into her shoes.

As a writer, it always interests me how we hear a story from a certain perspective and then we rediscover the story completely when we see it through someone else’s eyes. After all, when you read The Diary of Anne Frank, you are drawn completely into her world, her perspective, her heartbeats. We know nothing about how the rest of the people in the annexe saw her.

Otto Frank is the only survivor and the best one  to provide that outside insight into Anne . He said:

“For me, it was a revelation. There, was revealed a completely different Anne to the child that I had lost. I had no idea of the depths of her thoughts and feelings.”

As much as we revere Anne Frank through her diary, her father is has a different, but equally important. After all, he had it published and gave it to the world when he could have locked it away in a drawer. This was all her had left of his precious daughter…along with his wife and older daughter, Margot. However, he shared it with the world and gave millions, upon millions a precious soul mate who knew them intimately in ways we couldn’t even express to ourselves. She is the voice of the misunderstood teenager, the Jewish people, the oppressed, the writer and much more. 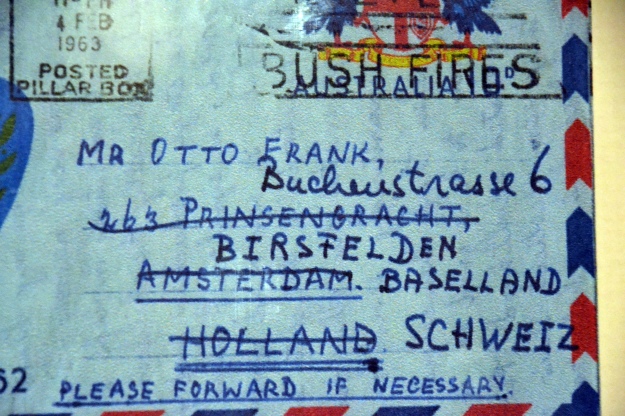 Anyway, following the publication and subsequent translation of Anne Frank’s Diary, young people wrote letters to Otto Frank  and he replied. Although copies of the letters he received have been retained by the Anne Frank House in Amsterdam, he didn’t keep copies of his own letters. So, in 2015, a world-wide search began and the Australian Jewish Museum located two Australian women who had written to Otto and had kept his treasured replies…Diana Munro and Anne Finlayson. Indeed, Otto Frank became quite close to Anne and called her the “Other Anne” and they met several times, becoming good friends. 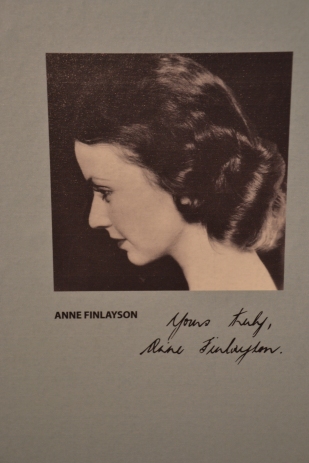 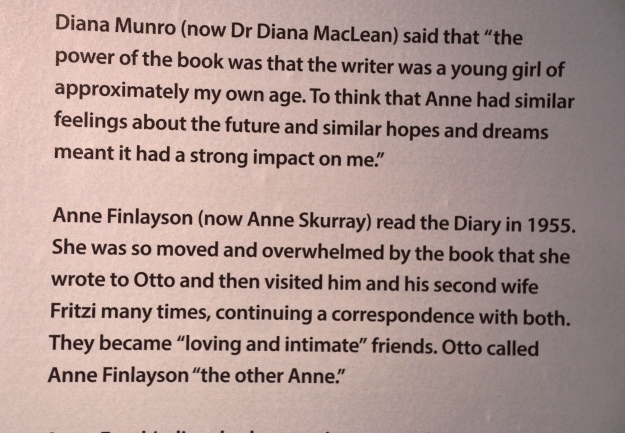 So after getting off the train and slowly walking along Darlinghurst Road taking photos, I arrived at the Jewish Museum. I have never been there before. I’m immediately struck by how this isn’t like your average museum. It’s more like a home, a definite Community Centre and no doubt a sacred place for Jewish people. It is cared for, loved and polished. As I said, I felt like I was being invited into someone’s home and made very, very welcome.

The exhibitions are upstairs and I’m conscious of time pressures because Mum is minding my kids and I wasn’t supposed to be detouring after my medical appointment. So, I’m trying to make sure I see and absorb Otto Frank’s letters and return to see rest. Yet, the exhibition of letters from the Holocaust attracts my attention and I had a quick look.

Back to Otto Frank…

There is correspondence between Otto Frank and a young New Zealander, Diana Munro and Australian, Anne Finlayson. The letters on both sides are incredibly deep and philosophical and you get to know just a bit of who Otto Frank was as a person, Anne Frank’s father and also someone determined to make the world a better place for the future, fight against the sins of the past.

While I could’ve typed these quotes up and prettied them up a bit, these are photos I took at the exhibition. I particularly wanted to share these with Merril Smith from Merril’s Historical Musings to thank her for telling me about the exhibition and I felt very much like we were there together and had a coffee and chat afterwards. 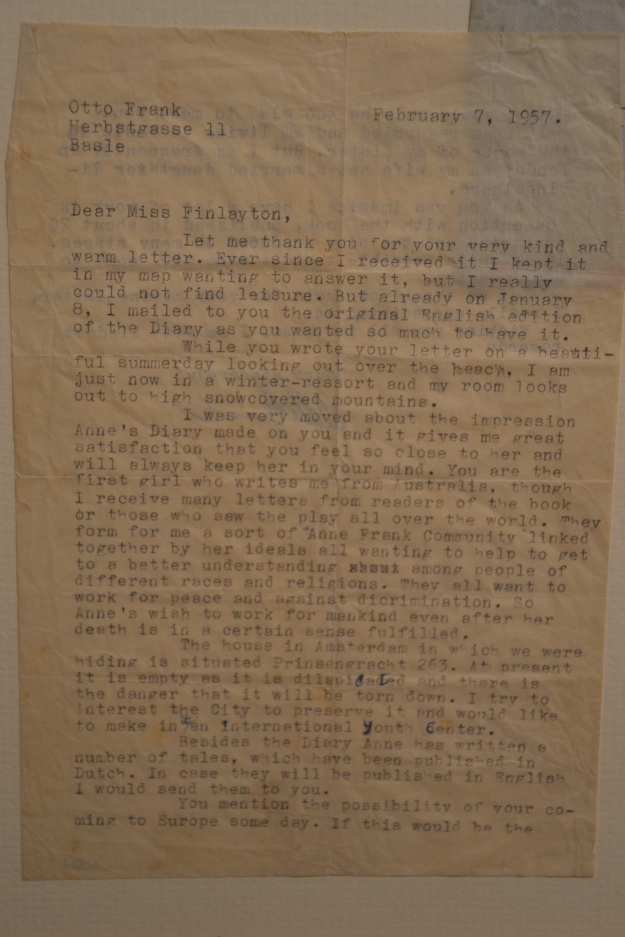 What I noticed first about Otto Frank’s letters was that they were typed. His typewritten letters instantly reminded me of my grandfather’s typed Christmas newsletters and their different circumstances. The type also places his letters in the past, in a different era and they feel special. 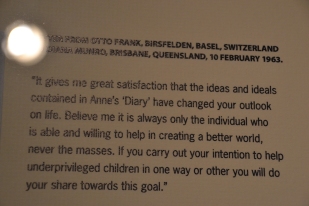 In addition to reading the letters, there was an excellent exhibition about Anne Frank’s life, the Holocaust and the secret annexe. This was a great refresher for me as it’s been 25 years since I visited her house in Amsterdam. 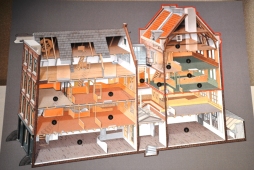 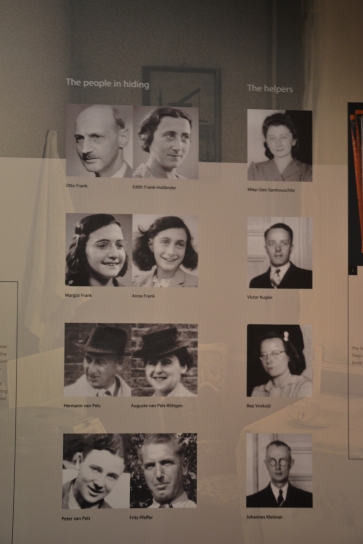 The people in the annexe and their helpers.

Since I visiting the exhibition, I’ve found that if you speak to ten different people about how The Diary of Anne Frank has touched their hearts, you could easily get ten different answers… all valid.

A replica of Anne Frank’s Diary on display.

That’s because in this complex diary commenced on her 13th Birthday, we each find something that relates to us in such a personal, intimate way. It’s like she’s peering deep into the inner-most secret passages of our soul, speaking out the cryptic writing on the wall and somehow made sense of it all. She has a clarity of vision which is astounding in anyone and I’m not going to put down young people by saying they can’t see more clearly than adults because so often they can.

“It is so easy to think of people who suffer, or have suffered, as other than ourselves. The very magnitude of the Holocaust means that single voices can be lost. Anne’s words make it personal. It is so very easy to lose track of major events in history. There are many to remember. It is much harder to forget the voice of Anne. Anne has been my companion, perhaps, for the forty six years since I read her book.”

So, if you’re interested in seeing these  exhibitions, you will need to hurry into the Sydney Jewish Museum. The exhibition closes mid-November.

You might also enjoy reading about our vigil commemorating the 70th Anniversary of Anne Frank’s death last year: https://beyondtheflow.wordpress.com/2015/04/15/anne-frank-70-years-on-our-vigil/ 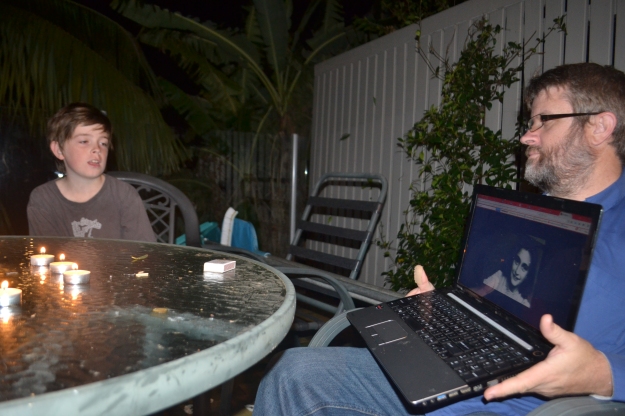