A working dog needs a job, a challenge and when none is provided, it will soon create a job of its own. Although Rosie and Zac, our year old Border Collie x Kelpie pups, love chasing balls and sticks right down to retrieving minute splinters and fragments, fetch becomes difficult when there’s no one home to throw. With no one to throw, somehow  being home alone translates into: “Let’s dig a hole.” Or even: “Let’s play wombats and dig a network of underground tunnels”. For all I know, they could even be digging an underground spy network, or even working on the great escape. No. They wouldn’t do that. They love us much too much. On the other hand, Lady, our Border Collie x Cavalier would be off in a flash. We’ve even had to install chicken wire along the fence line. Yes. She could well be called: “The Wanderer” :

Humph…when you consider escape artists and the diggingest dogs, even I’m wondering why we’ve further complicated our already complex lives with three “unnecessary” dogs. However, love knows no bounds, no logic, no sense. We have four humans and only three dogs, not that we have room for anymore except on a temporary basis. After all, we’re not on a farm. Of course, this also means that when the dogs decide to dig large, wombat like burrows, our backyard becomes a safety hazard and it wouldn’t take much to break an ankle, let alone your neck.

This is when their excavating activities met their match. Deciding to distract them, Geoff built them the stick toy to end all stick toys…the Giant Stick Swing. He screwed a chain into a very big stick, which he suspended like a swing so the dogs could grip hold of the stick and wrestle with it for hours and hours while they keep trying to work out how to extricate the stick from its cage. Our daughter was given the task of getting them interested and then their new job began. Both of them were working flat out pulling at the stick trying to get it out, running round and round and back and forth. It was the perfect device for exhausting two very energetic working dogs. Happy Days. 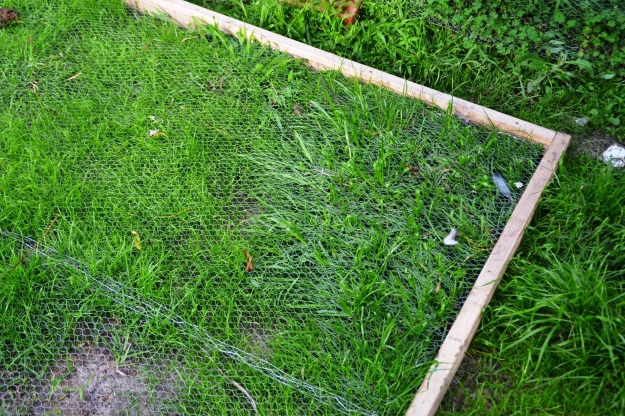 By the way, the Giant Stick Swing is only Geoff’s latest invention. You might recall that I recently introduced you to the  Dog Proof Lawn Protector where Geoff attached a layer of protective chicken wire to a large wooden frame which he is moving around the backyard on the equivalent of a crop rotation system, where he’s sowing grass seed and installing new sprinkler heads as he goes. It’s a lot of hard work just to have a patch of green, especially when there are no guarantees. Growing grass seems to be as precarious as farming crops. There are no guarantees.

Yet, there are those green thumbed-freaks of humanity out there who somehow have a perfect lawn. Indeed, they have a manicured lawn, which looks like it’s been trimmed with a pair of nail scissors and is meticulously maintained. Lawn which is a show piece, a status symbol. However, the perfect green lawn is quite an indulgence when we’re in the midst of a severe drought. Yet, at the same time, we’re doing what we can to salvage our patch of green from three working dogs, the drought and sandy beach soil and we’re succeeding without too great a cost.

Do you have any dog posts to share? Or, perhaps you’re also struggling to nurture your own patch of green? I’d love to hear from you.

Yesterday afternoon, I received an urgent text. “My pups” were on the move, and ready for collection. These pups are two 5 week old kelpie pups,  and did I mention something  about being bottle fed? I didn’t think so. You know me. Blunder in where angels fear to tread only to find out about the details by default, when it’s all too late. Yet, it’s not everyday you have the chance to even see such young pups, let alone take them home. I don’t know about legislation where you live, but I think pups need to be 8 weeks old to be sold here. So, despite what should have been a healthy scepticism about taking on such a challenge, I jumped at the chance…the opportunity of a lifetime. 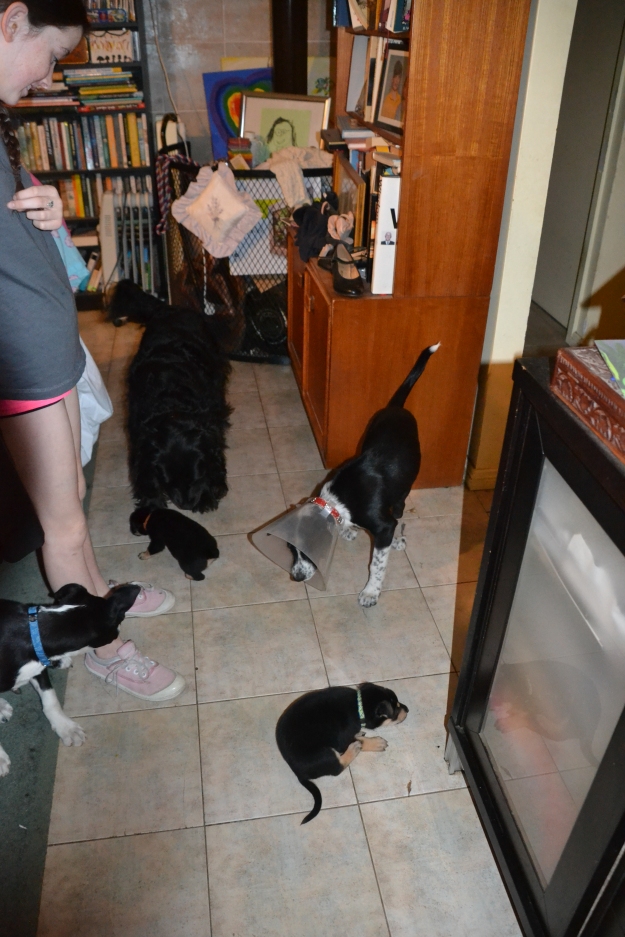 Welcome to the dog house.

The pups are absolutely gorgeous and about the size of an adult guinea pig and have rolypoly tummies on stumpy legs. I don’t think they’ve been outside before and they wondered about a little like they’d just landed on a new planet. I’ll call that planet: “Do your business”. Although our house has literally gone to the dogs, I am TRYING to get them to do their business outside.

BTW, I know absolutely nothing about how to care for bottle-fed pups. Indeed, I didn’t even bottle feed my own kids until they were old enough that I didn’t have to be pedantic about cleaning all the bottles. By then, whatever was growing in those bottles was good for their immune systems… 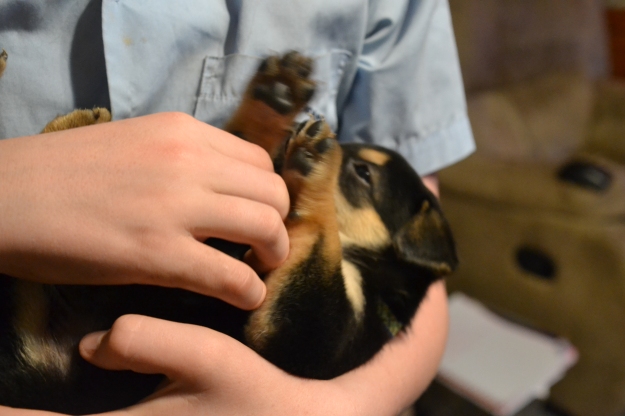 Just to fill in a few dots, I have volunteered as a foster carer for a local animal rescue group, Paws & Claws. I’m not sure how long “we” will be doing this. I am loving it and the pups are gorgeous, but we have our own pups to settle in and there will come a point where I’ll get the carpet cleaners in and at least have a break.

Or, more likely, I’ll be exercising the two pups we’ve adopted…Isaac and Rosie. I’m expecting lengthy daily exercise runs down at the beach. Actually, I’m hoping the pups will exercise themselves down at the beach while I bumble along at adult speed, instead of doing the “Flight of the Bumble Bee”. Of course, there’s also the possibility the kids might actually walk the dogs… 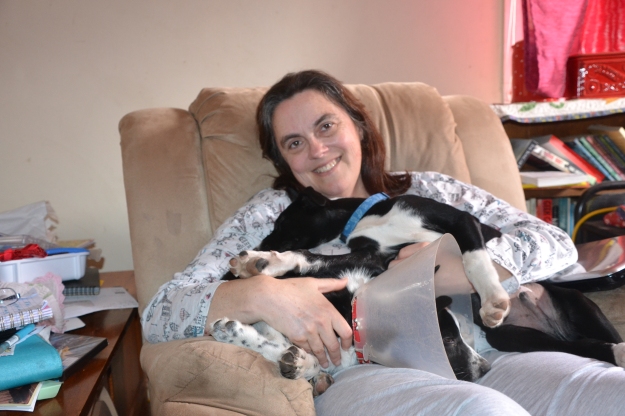 Me and Our Pups.

Meanwhile, our pups went off to be desexed last week. This was done via key hole surgery. Zac was bounding around pretty quickly but Rosie also needed her dew claws clipped and so she returned with her back legs bandaged and a cone around her head. She finally got the cone and bandages off last night…happy days!

So, our house is currently a five dog household, which means us humans are outnumbered. However, before you start thinking we’re facing defeat, beings on bottles don’t have voting rights. So, humans still rule even if it is a case of only just.

Anyway, I’d better keep moving. I think I’m supposed to be sleeping when the pups are sleeping. Isn’t that how it goes?

Have you ever fostered humans or animals? How did it go? Please leave your thoughts in the comments below.

If you’ve been popping by lately, you’ll already know we’re fostering two Border Collie x Kelpie pups…Zac and Rosie. We’re planning to keep Zac and hoping a friend will adopt Rosie. These two pups love each other so much. Just look at the bite marks in each others’ ears! I’m amazed they haven’t been pierced! 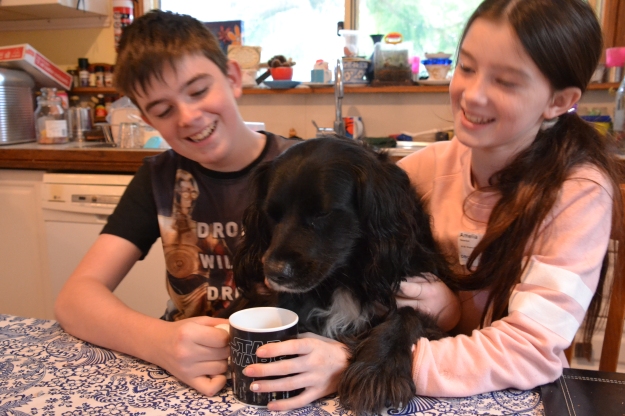 Most of you will already know Lady, our 5 year old Border Collie x Cavalier. AND, that we lost our beloved Border Collie, Bilbo a few months ago. We’d had Bilbo since a pup, and going through so much as a family with him, we’re still grieving. He was definitely one of us. 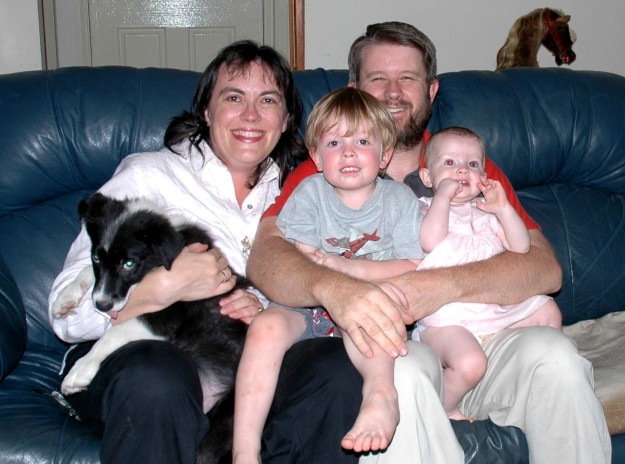 Grief affects people differently. Some people lose a pet, and never get another one. Meanwhile, others rush out and seemingly replace that pet straight away without so much as a grieving period. We have been trying to become a one dog family, but it hasn’t been working. It soon became clear that it was just a matter of time, before we adopted another pup. So, when my friend who does dog fostering heard that some border collie x kelpie pups needed a foster family, we jumped onboard. It was a good way for us to get to know our next dog before we committed.

Now that I’m a foster mum, I was kind of hoping that Lady might feel the same way. That she would adopt these pups as her own. After all, we love a series of books called Unlikely Loves, and have read stories of all sorts of random animals becoming friends, family, saving a life. However, the books never mentioned the flip side of the coin…rejection.

I don’t know whether the pups saw Lady as a surrogate Mum or a recalcitrant black sheep, which they couldn’t round up. Either way, she didn’t appreciate their attention and has been growling whenever they’re approached. I think this is dog lingo for: “Get lost! I am NOT your Mum!”

Indeed, after three days of growling, I was starting to think Lady was one of those cranky old ladies you run into on the train when your kid’s are having a bad day. I’m sure you’ve run into these types yourself. They glare right through you with their hoity-toity glares, and you don’t even need to hear the words: “Bad Mum”. You been told. Thank goodness, they don’t have magical powers, because otherwise these stares alone would burn you to ash…Zap!

To be fair to Lady, she never asked to have puppies. Perhaps, she thought she’d had all of that fixed, and never wanted pups. Moreover, with Bilbo gone, perhaps she hasn’t been lonely. Indeed, it could well be that she’s been basking in world domination.

Well, that was until a pup grabbed hold of her tail.

Two pups moved into her bed.

Clearly, Lady’s empire has crumbled. Her tiara’s dangling round her paws, usurped by their Royal Highnesses.

I guess when you reach rock bottom, the only way is up. Or, making friends with the enemy and letting them sleep with you in your bed. 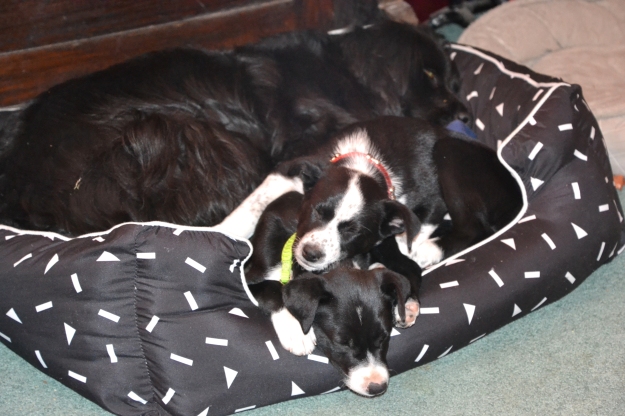 Lady and the pups…a beginning.

So, things are looking up. It took a few weeks for Bilbo and Lady to accept each other, so I expect relations will all come good in time.

Have you ever introduced a pup to your older dog? How did it go? I’d love to hear from you!

PS After the first night of howling and broken sleep, the pups are sleeping through the night. Just a brief cry when I close the laundry door. Just call me the “Puppy Whisperer”.