While we Aussies are a tough breed, nobody’s invincible.

Now that Winter is setting in, it’s pretty clear that cold weather is our kryptonite. We must have some kind of inbuilt solar panel and need those vital sun’s rays to survive. Without them, we shrivel up and lose all power. Hibernate among the gum leaves alongside the koalas wishing we were small enough to crawl inside a soft, warm pouch.

The strange thing is that it’s not just the humans who are affected. I even saw my friend’s Scotch Collie down at the beach wearing a coat the other day. These dogs with their thick woolly coats survived a Scottish Winter once upon a time. However, the Australian version is just as allergic to the cold as it’s human counterparts.

Hence, when you hear an Australian cry “cold”, you’d better ask for clarification before you assume we’re talking about sub-zero temperatures.

Cold is all relative.

But before you write us off for being “soft”, just wait until the thermometer climbs to 30 degrees Celsius and you’re talking about being “hot”.

We might not be great with the cold but know how to handle our heat!

If we were having coffee, I’d begin by introducing you to my new friend and additional blogging mascot. Name yet to be finalised, but “Bluey” seems appropriate. That’s what you call a red headed bloke in Australia. Or , at least that was in back the good old days. Its grey fur seems to have a bluish tinge, which being Australian, would make him “Red” not “Blue” but Bluey suited him better.

I adopted Bluey from a fancy shop in Kirribilli in Sydney. The shop is right next door to my dentist and so I always go in there for a bit of yin and yang. A bit of pain upstairs, a bit of pleasure downstairs. Makes perfect sense to me!

Absolute pain when the credit card comes in!

Just to put you in the picture, I should point out that Kirribilli is on the Northern end of the Sydney Harbour Bridge and my dentist is in a very similar location to the dentist in Finding Nemo. It’s a stunning location with magnificent harbour views, quaint 19th Century terrace houses and cafes, gift shops etc. Indeed, both the Prime Minister’s and the Governor General’s Sydney residences are just around the corner. Moreover, if you were in a really bad mood, you could throw a rock across Sydney Harbour and straight though a window at the Sydney Opera House. Well, only in your dreams but it would make for an exciting game of front yard cricket.

We are all slowly settling into the new school year and Geoff went back to work…all a rude shock to the system! Our daughter has taken up the violin again given the prospect of playing at the Sydney Opera House with the school. She also joined the school band and has taken up the  Baritone Horn, which is a small euphonium. This is in addition to her usual thing of doing dance and choir at school. Oh, she also does jazz, ballet and modern dance out of school. Not sure how all of this will go. Meanwhile, our son is settling into high school. Even though we live near the beach in a non-rural setting, the school has quite an accomplished agriculture farm and course and my son and many of the kids are spending breaks down there. They have done well showing their animals at the Royal Sydney Easter Show, which is a big achievement.

In terms of blogging this week, my train trip to the dentist produced a poem about living with adversity: The Masked Intruder. For me, that’s a rare auto-immune disease…Dermatomyositis. As you would expect, I’ve written a lot about living with this pretty intrusive disease but this really encapsulated where I’m at now. Things are going pretty well with a few residual symptoms but I’m in remission. I also wrote an accompanying post: Wrestling With Adversity.

If you are living with adversity, I encourage you to read it and perhaps you’ll feel less alone. Some times the road can seem so long and you become so exhausted that it’s hard to go on but I encourage you to keep putting one foot after the other. Persevere.

I actually read and finished a book this week. It was Max Porter’s: Grief Is The Thing With Feathers. This is a beautifully poetic book, which looks at how a father and two sons “move forward” following the death of his wife/their mother. Crow, inspired by the poem by Ted Hughes, moves into their house to help them through the worst of the grieving process. Anyway, I do intend to write more about it but I highly recommend it. 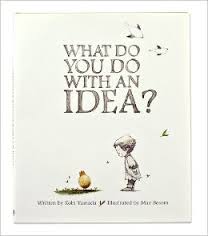 Indeed, I read two books this week. However, I kind of cheated on the second book. Rewinding back to the shop in Kirribilli, while I was buying Bluey the Koala, I also found an incredible picture book: What Do You Do With An Idea? written by Kobi Yamada and Illustrated by Mae Besom. If you have ever had a great idea which has sparked great mirth whenever you’ve shared it, this is the book for you. Just because it was written for kids, there’s no reason why us bigger people can’t benefit from it as well.

Tomorrow, my daughter and I are finally off to see Matilda The Musical together. I’m really looking forward to it.

Hope you’ve all had a great week and thanks for popping by for coffee.

I hope you’ve had a great week and thank you for popping round for coffee. It’s been great to catch up. This has been part of the #WeekendCoffeeShare is a weekly linkup hosted by Diana at Part-Time Monster, and here is the link.

News has just been received that Bilbo, a distraught Border Collie, has reported a boy he calls “his brother” missing.

Bilbo states that the boy, who has been missing since Saturday 2nd January, has been eaten by Drop Bears. He has grave concerns for the boy’s safety.

When investigators interviewed Bilbo, he said there was nothing left of the boy and that the Drop Bears have even painted his bedroom to cover up and contaminate forensic evidence.

Bilbo said: “Only the vicious Drop Bear is capable devouring its victims whole like this. They’re a savage beast and fall out of trees silently attacking their prey without warning.” 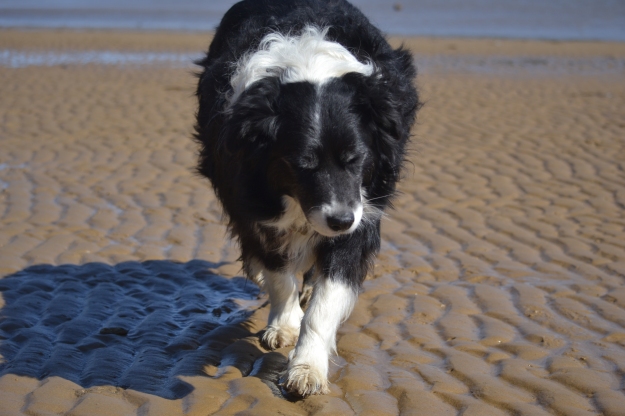 Bilbo out searching for the missing boy.

Bilbo said: “There’s a tree outside the boy’s room. This is how the Drop Bear snuck in and disappeared without being spotted.”

Drop Bears (Thylarctos plummetus ) are around the size of a leopard or very large dog with coarse orange fur with some darker mottled patterning (as seen in most Koalas). It is a heavily built animal with powerful forearms for climbing and holding on to prey. It lacks canines, using broad powerful premolars as biting tools instead. – See more at: http://australianmuseum.net.au/drop-bear#sthash.kbhxOHhg.dpuf

Although actually sightings of Drop Bears are extremely rare, the Australian Museum’s web site explains that are very adept hunters:

“Drop Bears hunt by ambushing ground dwelling animals from above, waiting up to as much as four hours to make a surprise kill. Once prey is within view, the Drop Bear will drop as much as eight metres to pounce on top of the unsuspecting victim. The initial impact often stuns the prey, allowing it to be bitten on the neck and quickly subdued.

If the prey is small enough Drop Bears will haul it back up the tree to feed without harassment from other predators. (See more at: http://australianmuseum.net.au/drop-bear#sthash.kbhxOHhg.dpuf)

Police have checked local CCTV footage and no signs of the boy have been found.

“It’s a real mystery,” said Sergeant Plod of Beach Village. “This is the first talk we’ve had of Drop Bears in the area and we are taking this threat extremely seriously, particularly since the reported sighting in Brisbane.

We advise all local residents to keep their house locked at all times and not to leave any windows open. Keep pets inside and out of harm’s way as well. When it comes to Drop Bears, your much loved pets are nothing but a snack.

If anyone sees a Drop Bear, do not approach. They are extremely dangerous. I repeat….DO NOT APPROACH. Instead call Drop Bear Stoppers immediately.” Sergeant Plod said.

We are thinking of the boy’s family and pray for his safe return.

PS Mister has been at the Australian Jamboree during this time. His troop is called the Drop Bears and they are having an incredible time. Geoff and Miss caught up with him today. He’s very tired but still smiling and having the time of his life! Stay tuned.

Forget all your fears of being attacked by killer drop bears out in the Australian bush.

There’s a new threat posed by the Australian koala population. A mutation in the eucalyptus leaves which the koalas eat, has caused these once small, cuddly critters to grow and grow and grow and grow, dwarfing tall towers and crushing anything in its path.

Miss and I were simply eating ice cream in Hyde Park when a huge paw swooped down from the sky and took us heavenwards. You could just imagine our horror. As much as I might love koalas, this was obviously no ordinary koala and not being able to get hold of any gum leaves in the city, it was a cranky koala as well…not at all like those sleepy koalas you see at the zoo.

Anyway, we were rescued and were much relieved to return to terra firma.

Take it from us, do not pat these koalas or even attempt to take photos. Instead, be afraid. Be very afraid. Miss and I were very lucky to escape and you might not be lucky!