You could say, that attempting to make Lemon Meringue Pie with two kids was overly ambitious and verging on insanity.It’s the sort of project, like climbing Everest, where you call for professional reinforcements and are very well prepared. You could well also consult the Great Google Guru for a few “chef’s tips” to create that perfect lemon meringue mountain. It’s not the sort of project where you bring in the rookies..despite their oozing enthusiasm and willingness to help!

There is a sacred horror about everything grand. It is easy to admire mediocrity and hills; but whatever is too lofty, a genius as well as a mountain, an assembly as well as a masterpiece, seen too near, is appalling.
-Victor Hugo

However, as a parent, if you always waited until conditions were just right and absolutely perfect, you’d never even get out the front door. I know some parents actually manage to pull off the whole perfect life routine (Pewk!) but most of us are simply bumbling along and patching up the mess as we go. 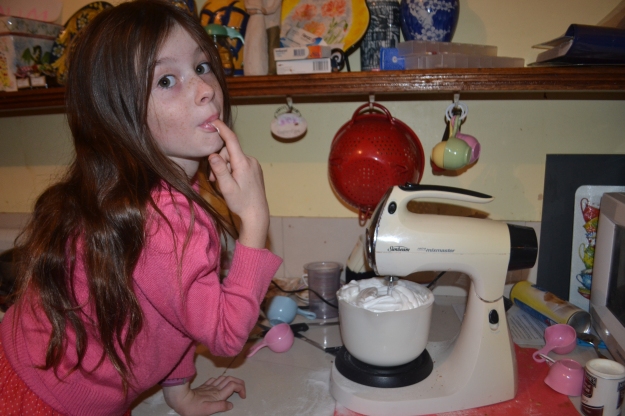 We even become accustomed to disasters.

Indeed, we expect it.

Yet, rather than being negative or self-defeatist, forewarned is fore-armed. Indeed, armed with all sorts of cleaning and patch-up products, we are prepared…at least, some of the time!!

Anyway, many years ago, I was renowned for my Lemon Meringue Pies but I’ve never made them for our family. No doubt for obvious reasons. There are many much less demanding recipes out there it is pretty challenging with plenty of pitfalls…especially trying to make it with kids either under foot or even just “trying” to help!

“Despite all I have seen and experienced, I still get the same simple thrill out of glimpsing a tiny patch of snow in a high mountain gully and feel the same urge to climb towards it.”
-Edmund Hillary

Lemon Meringue Pie not only looks like a snow-capped mountain peak, pulling this showy dessert off is indeed like climbing a mountain. There’s making the pastry and trying to get that perfect consistency but not only that being able to roll the stuff out and actually roll it out well and manage to tranfer it from the bench into the pie plate without it flopping off the rolling pin (no wonder the dogs were parked at my feet. They knew!!). Then, there was making the lemon filling on the stove.This could well get lumpy and the filling needs to have that lemon tang without being overly sour. I was a bit concerned that my lemons were smaller than average so added an extra one to hedge my bets. When it came to making the meringue, I had two kids assisting and a mixmaster under attack. Those little thieving fingers couldn’t keep out of all that sticky white goop…bees to a honeypot!

Why I ever considered making my Lemon Meringue Pie come back baking with the kids, I’ll never know. Actually, yes I do. It was because I wanted them to share in the memories. That  I wanted to share what felt like a very important part of me…one of my very special signature dish. I made my grandparents a Lemon Meringue Pie when my Aunty Lyn died suddenly aged 36 and for some reason, I felt that it would make a difference and somehow it did. For the rest of her life, my grandmother spoke about “that pie”. Sure, she loved the pie but in retrospect, it was the thought…the way it reflected my love for all my family who were grieving…which meant the world to her.

Only when you drink from the river
of silence shall you indeed sing.
And when you have reached the mountain top,
then you shall begin to climb.
And when the earth shall claim your limbs,
then shall you truly dance.
-Khalil Gibran

On Sunday, with my bag full of lemons still stuffed inside the over-crowded fridge, I bit the bullet. We were having Lemon Meringue Pie for dessert. The kids were both very excited. “Mummy’s making Lemon Meringue Pie”. (you can translate this “excitement” into little peoples running haphazardly around the kitchen getting underfoot and in the way!!) With it’s impressive mountain of meringue it is a striking dessert and they thought I was exceptionally clever for being able to make it. They had such faith!

However, I wasn’t quite so sure. It’s been a long time since I’d last made it and I couldn’t find my old recipe and wasn’t feel sure about anything.

A friend who is far away is sometimes much nearer than one who is at hand. Is not the mountain far more awe-inspiring and more clearly visible to one passing through the valley than to those who inhabit the mountain?
-Khalil Gibran

Of course, the fact that the TV Masterchef series has just launched off again, didn’t help. The show totally raised my unrealistic expectations to all sorts of lofty heights. I was no longer Rowena making humble pie with all the distractions, interruptions and chaos of a home kitchen. No, I was indeed, a French-trained Masterchef managing my ingredients and meticulously moving towards perfection: Bon Appetit. 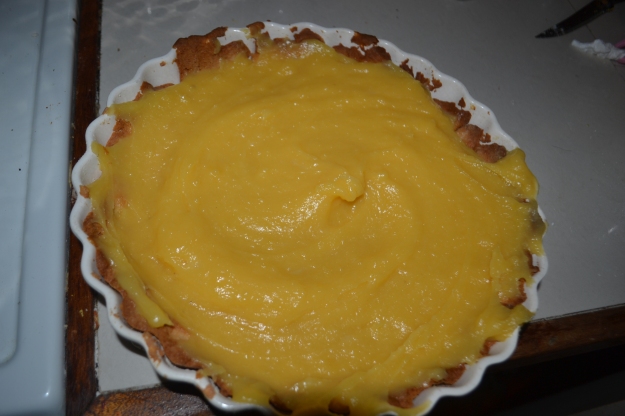 Miss added that extra special touch swirling around the lemon butter filling. Quite the professional in the making!

Anyway, after doing battle with the kids, the mixmaster and myself, I have expanded upon my “Kitchen Rules & Principles”

1) Check ingredients before getting started. This wasn’t such a problem this time but Geoff has had to go on mercy dashes to the supermarket for missing\, essentiasl igredients in the not-so-distant past.

2) Chefs have this great term “mise en place”, which basically means having everything set up before you get started.

3) Ingredients only in the mixmaster. Fingers, spoons, spatulas or any other kind of implement are banned from the bowl and mixture while the beaters are moving.

4) The pastry and meringue are not play doh. They do not like being touched and overworked.

5) Keep your thieving fingers off the meringue. This applies to both cooked and uncooked meringue.

Anyway, Miss had great delight piling the meringue up on top of the pie and calling it Mt Kosciusko, which is Australia’s tallest “mountain”. To be honest, there was a  bit too much delight and she would’ve been playing with the meringue for hours if I hadn’t stepped in.In case you weren’t aware, meringue doesn’t like a lot of handling.

It is not the mountain we conquer but ourselves.
-Edmund Hillary

I was pretty pleased with the end result but am going to have a few more practice attempts and fiddle with the recipe a bit before I post it. After all, there is nothing humble about the gracious Lemon Meringue Pie.

That is until little fingers start pinching bits of the meringue and the snow appears to be melting only in this instance, it’s patches of yellow which are peering through the gaps instead of green. 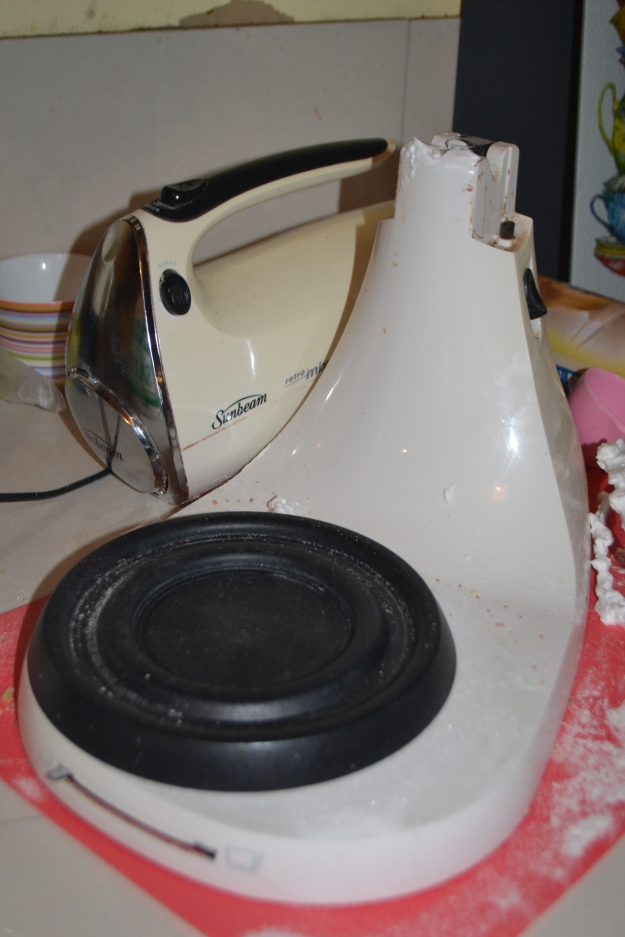 Decapitated…the mixmaster was looking terminal until Geoff wove his magic.

By the way, I almost forgot to mention that we had a near fatality during the baking process. Probably on account of my poor instructions, Mister pressed the wrong lever and the mixmaster came off its base and then the clip came off and fell inside the stand and later proved to have snapped. We hate needless waste and at the thought of having to throw a good mixmaster away because some clip broke, was unacceptable. Geoff took on yet another engineering “Mr Fix-It” Challenge. He disappeared off into the garage and returned with a clip he’d manipulated out of chunk of a metal hard disk. You can knock people for “keeping” all sort of bits and pieces for a rainy day but when they achieve a miracle like this, I can’t but be impressed.

Any memories or reflections? Would love to hear from you!