This was determination. With a chocolate moustache painted across his upper lip, Little Man was stretching his tongue as far as he could, savouring each and every last smudge. Unlike his meals at home, none of this was going to waste!

Indeed, even as a rambunctious two year old, he knew there was chocolate and there was CHOCOLATE!!! This delicacy was so incredibly rich and creamy and as much as he loved his Freddo Frogs, this was an altogether different experience.

The older lady in the black dress had given him a chocolate. And then, even another!

Wow! Little Man gravitated towards the shelves. There were chocolate Easter rabbits everywhere! He’d never even seen so much chocolate before in his life but the rabbits themselves also looked exquisite. It was almost like his magical picture-book world had suddenly sprung to life and he’d become absorbed into a chocolate fairytale. His big brown eyes were bursting out of their sockets. The smell was so intoxicatingly good, that even his nose was twitching!

Ooh, yes! Our Little Man didn’t need to tell me that he’d stumbled into chocolate Heaven.

It might have been 25 years ago but I still remembered the very first time I walked into Du Plessy Praline holding my mother’s hand and experienced those chocolate rabbits myself. As a child, any chocolate is appreciated but this was pure heaven. The shelves were lined with an eclectic collection of handmade chocolate rabbits…racing car rabbits, a rabbit on a tractor. Indeed, there were rabbits everywhere . Of course, the rabbits for sale weren’t wrapped in foil like their poor relations at the supermarket. Rather, they were elegantly wrapped in clear cellophane, which was like looking through a window into heaven itself. Although I was definitely not allowed to touch ANYTHING, I could already taste all that divine chocolate.

Naturally, as much as I love that shop, it was also a hard place for a kid to visit. All of that chocolate and you’re under Mum’s thumb. I vowed then and there that when I grew up. I was going to buy and eat every single chocolate rabbit in the shop…even if it made me sick! After all, when you’re a grown up, you can do whatever you like. Mum can’t say: “No!”

Fortunately, the Easter Bunny had excellent taste and a Du Plessy rabbit would always arrive every Easter Sunday. Most years, it still does!

Du Plessy’s was nestled underneath Peterson’s of Pymble where we used to buy my school uniforms. Stylish yet simple in black, “Madame” was Du Plessy Praline. Naturally, Madame was French and in Sydney back in the eighties, that was synonymous with sophistication. Madame did not disappoint. In addition to their Easter chocolates, Du Plessy specialised in very thin, flavoured chocolate slices. This being the era of Red Tulip’s After Dinner Mints, needless to say, there was no comparison…only superlatives!

Madame’s understated elegance went way beyond the chocolate. Even the packaging was impeccable…an art form in itself. The box was meticulously wrapped in quality white paper etched with Du Plessy’s signature logo and tied with a piece of gold string. Looking like a little treasure chest, you could take that little white box anywhere on the North Shore and it didn’t need an introduction. It spoke for itself.

Although I knew her face so well, we didn’t know Madame in quite the same way we knew the butcher or the fruit man. No doubt, Mum had been in a rush on these visits, preparing for yet another dinner party. She’d pick up half –a-round of French Brie from Cheese Please next door and dart into Du Plessy’s for those inimitable after dinner chocolates. When you’re a kid, adults always move so fast. Even after all these years, I can still feel Mum’s intense busyness trying to get everything ready on time and that exasperating sense of impending doom. After all, who isn’t trying to raise The Titanic from the murky depths of the Atlantic, every time they have guests?!!

Indeed, when it comes to our place, The Titanic sank many moons ago and is long past resurrection. It’s gone!

These days, I still return to Du Plessy’s and its offspring Otello with my own children and the magic continues. While my daughter and I were in Sydney yesterday, we popped in. I was hoping to show her their Easter display but unfortunately we were two weeks early. We live about an hour away so it was unfortunate timing.

Remembering the photos I’d taken in their Turramurra shop, I asked whether they would like me to email them through. These were taken exactly ten years ago, as I mentioned, just after Mister had had his first haircut at Mum’s hairdresser.

It’s funny because I was a bit shy about mentioning the photos. I’m not sure why but I blame the usual self-doubts. However, who wouldn’t want to see photos taken in their family business ten years ago, especially when they involve chocolate?!!

Of course, they were thrilled. I was introduced to Madame’s daughter-in-law. As it turned out, they have no photos of that shop. I was so excited that my photos would at least fill some of that gap. This was almost like the return of a ghost, except unfortunately there were no photos of Madame. I’d had just enough pluck to ask her if I could photograph the kids in the shop but didn’t take that extra step. That’s an extra step you have to take as a photographer because more often than not, that is THE shot.

I really wished I had. Somehow, just having that picture of Madame in my head is no longer enough. She was such a uniquely special part of my childhood…the lady with all those magical chocolate rabbits! Who wouldn’t love her?

Mister getting his hair cut.

After some searching, I finally found the photos. They were taken exactly ten years ago in Easter 2006. Our daughter was only 10 weeks old and Mister had just turned two. We’d just taken Mister for his first hair cut and the chocolate shop was just around the corner. Mum, the kids and I made what you could only describe as a pilgrimage to this very special place from my childhood so I could pass that magic on. After all these chocolate rabbits had become such a part of our family’s Easter tradition. 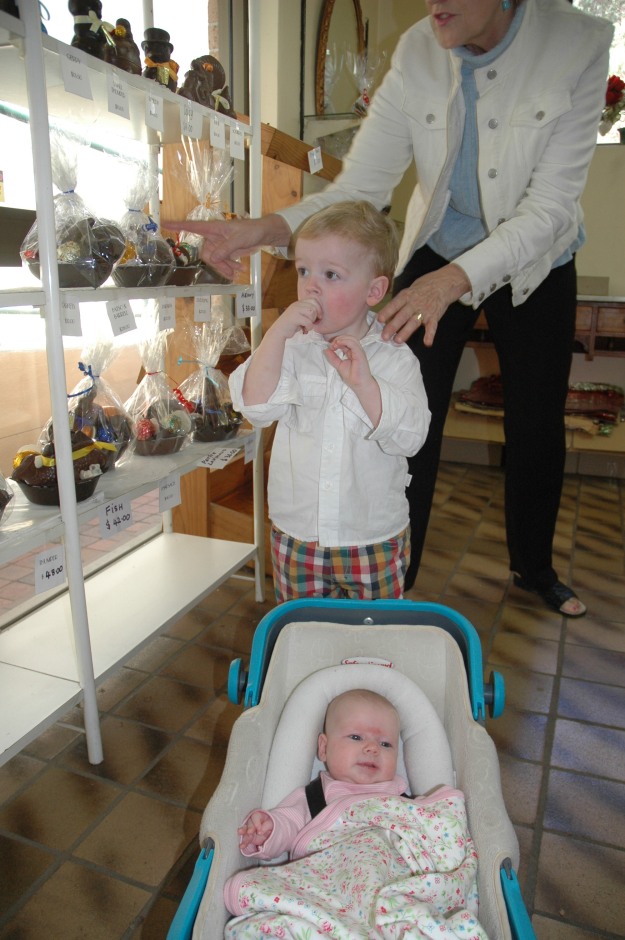 Little Man with his letter sister and Grandma.

I often find revisiting photos rather enlightening. So often, I miss things at the time and it’s only when I come back, that I finally see between the lines.

In this instance, I found were photos of a lively, curious 2 year old boy feasting on chocolates inside the shop!!

What was the meaning of this?

Well, Madame had given him a couple of chocolates…petits cadeaux!

That was really special and really touched my heart and unfortunately, I didn’t appreciate the significance at the time. That gesture of love and Madame’s appreciation of our Little Man.

After all, as you might have experienced yourself, little men usually aren’t welcome in shops. Or, for that matter, in a great many locations. They’re boisterous, loud and seemingly have more tentacles than an octopus, sticking their little fingers into everything. Even when my son was being perfectly behaved, he’d somehow get in trouble. It seemed being a little kid, especially a boy, was enough!!

However, obviously my son had found his way into Madame’s chocolate heart, which was melting all over his mouth, little fingers and creating a scrumptious chocolate moustache.

Now, that my Little Man is almost 12 and recently started high school, I understand why Madame cherished my son so much. I have no doubt that he reminded her of her own precious son who had well and truly grown up by then. This is the very same son who is now running the business continuing their family tradition of hand-making, incredibly scrumptious French chocolates under our hot Australian sun. More than 50 years later, Du Plessy still lives on!

Of course, he is carrying on so much more than just a family business!

After all, you never quite know when a chocolate heart filled with love, might just make all the difference!

I should know. I’m eating one now…a gift for the random photographer!

This has been such a beautiful trip down memory lane but I need some more chocolate!

Too young for chocolate, our very own Miss Bunny Rabbit, aged 10 weeks.