Ever since I was a child, I’ve had to check out the  “District Exhibits” competition at The Show. These displays are set up by four districts of NSW and South East Queensland. A theme is selected and created pictorially on a large scale, to strict rules and using only the produce of the particular district which typically includes wool, wheat, apples, pumpkins, sugar cane, citrus fruit, vegetables and brightly coloured bottles of preserves. Also displayed are other primary products such as fleeces, carcases of beef, wine, honey, cheese and sausages. These pictures are usually really clever or feature freakishly large veggies like pumpkins the size of a carriage. Of course for city slickers like myself, all of this is amazing and where city meets country.

I just loved this train, which actually moved around. By the way, you’ll notice that the exhibition is sprouting due to the humidity.

The kids taking a closer look and feel of the produce which has gone into the exhibit. 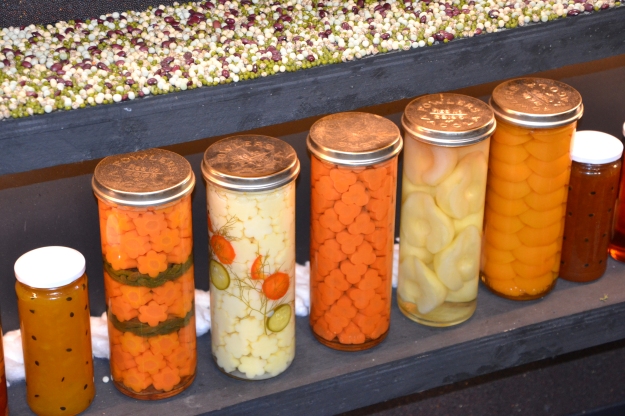 Do you remember these jars of preserves? My grandparents used to preserve Cape Gooseberries in them. They lived in Queensland.

The Australian economy used to ride of the sheep’s back. Looks, like we’re now carrying the sheep.

This 249kg pumpkin wasn’t part of these exhibits. Rather, it decided to do some blog-bombing and who am I to argue with a 249kg pumpkin? No, I moved right out of the way…”You can have anythi9ng you like, Sir. I’ll even give you your own blog: “Huge Pumpkins Inc.”.

I’ve really enjoyed revisiting the highlights of the Royal Sydney Easter Show. It’s such a huge, sprawling event that you have to keep moving and through the photos, I’ve been able to experience it all in much more detail.

No doubt, all weekends away end up feeling like Cinderella’s horrific crash landing after the ball. You’re back in rags, your coach is a pumpkin and both you and Prince Charming are so quite what you used to be.

My weekend in Palm Beach was no different and once I’d polished off that divine chocolate cake and all that luscious chocolate sauce, I was on borrowed time and the clock was really ticking. 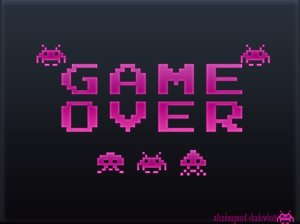 However, as the rain and wind whipped around, a lingering doubt emerged. Could the ferry service actually be cancelled?

If so, how on earth was I going to get home?

No ferry would stretch the 30 minute journey home into an extremely long, arduous, meandering journey involving 2 buses, 2 trains and not only a packed lunch but also dinner and possibly even a midnight snack.

This was obviously a serious concern!!

However, as if I would travel all that way when I could just stay another night and wait until the storm cleared! Yeah, right!! I could just imagine how well that would go down! There I was living it up in Palm Beach while Geoff had been at work and taxiing the kids around and then he’d be having to take time off work as well to get them to school. Yes, I’d be extremely popular!!

Indeed, it could even be grounds for divorce!

We’ve been on some pretty ragged rides on the ferry before, crossing the high seas where the waves loomed like skyscrapers overhead and our beloved ferry felt more like Scuffy the Tugboat, seemingly tossed like a salad in the ferocious  surf.  Of course, the kids who have a real penchant for melodrama, were freaking out about sinking, drowning and, of course,  even dying while the ferry plowed on through the drenching rain and heavy winds. Ghostly white and sitting on our laps wrapped up in our arms, the kids are vowing never to catch the ferry again. That was a few years ago now before they became intrepid sea scouts!

The ferry service was cancelled for the rest of the day after that.

I was concerned about the ferry being cancelled on Sunday too.  Sure, I know we’re not crossing notorious Bass Strait of Sydney to Hobart Yacht Race fame but the weather still gets wild enough. Wild enough to cancel the ferry. That’s right. There comes a point when even the most intrepid Palm Beach Ferry Captains hang up their hats and stay on terra firma.

However, I’m in luck. The ferry is running and although the weather is a little rough and wet, it remains quite civilised.

A friend from Church drops me off at the wharf with 15 minutes to spare where I can enjoy watching some people fishing while the sun sets. I am reminded of Ernest Hemingway’s The Old Man and the Sea. However, the keen fisherperson is a woman and she knows her stuff. With the precision of a plastic surgeon, she wraps up a cooked prawn in some plastic netting salvaged from a bag of fruit and pushes the hook through. That prawn won’t come off without a fight, so the fish will have to work a bit harder tonight if they want a free feed!!

At 6.15pm, this is the last ferry and in contrast to yesterday’s rowdy party atmosphere, the ferry is almost empty. There’s just a few weekend stragglers on board and pure silence. You could even meditate it was that quiet. Talk about a contrast!! We all sit inside…even me who is all but always out there on deck pushing the limits with my camera. Too wet, too windy and way too bumpy tonight. Time to take it all in through the rain-stained window.

The View through the Window- Palm Beach Ferry.

As the ferry started approached Ettalong Wharf, I was looking out for Geoff and the kids and really looking forward to their enthusiastic greetings: “Mummy! Mummy!” and finding out how their scout camps went. These are the sort of exciting moments you live for as a parent: warm, gutsy hugs, smiles, laughter and a thousand stories all spilling out at once. That’s the thing about going away. As much as you protest against the homeward journey, we all know: “There’s no place like home!!”

The Palm Beach Ferry returns to near deserted wharf at Ettalong as the weekend draws to a close.

However, when the ferry pulled into the wharf, there was no one there. The wharf was empty, deserted and not even a sign of our car anywhere. No enthusiastic waves. No hugs. No Mummy!!! Just the sun setting over a deserted beach and the sounds of the wind and the surf.

I knew I was being a bit ridiculous, especially after it was me who actually went away for the weekend. However, there was this residual small voice which I’d thought had disappeared long ago:

It’s not that I’m looking for sympathy or even a chorus of: “where were they? Why weren’t they there to pick you up? How dare they!” I mean…it’s not like I cried or anything. However, after building up the big greeting all the way home and really looking forward to seeing the rest of the family, I did feel a bit sad, forgotten and (drum roll)  ABANDONED!!

Serves me right for going away for the weekend without them. This was karma and a taste of what it’s really like to be alone.

As it turned out, the family wasn’t far away and had got held up at scouts. Geoff and the kids had been unloading boats, kayaks and all sorts of paraphenalia from their weekend competing at the Sirius Cup at Sydney’s Balmoral Beach. That’s all. Nothing sinister!

Mister poking out his tongue while scouting at the Sirius Cup, Balmoral Beach.

Mister had had great fun and made it into the finals for the C2 at the Sirius Cup, which means a 2 person canoe. We were so proud..particularly as he’d overcome his fear of sharks and other nasties and gone for it!! Miss had done really well at her Cub leadership course too. However, there are unfortunately no photos. 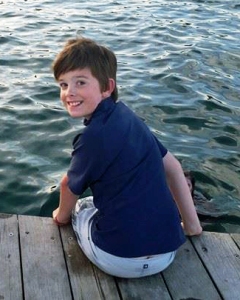 A reflective moment during scout camp.

Boo who! Tomorrow…it’s back to yet another manic Monday morning. I’m going to need a pretty strong coffee to get me going. It’s going to be like raising the Titanic.

The Monday morning salvage routine is going to be tough!!

xx Rowena (and a few extra kilos after that chocolate cake!!)