Well, my apologies to those of you who are well aware that it’s now longer Thursday and that calling this post “Thursday” Doors is a bit of a lie. Indeed, if I don’t hurry up, it’s going to turn into a double-lie because we’re about to hit Saturday here in Sydney, Australia.

However, I had a trip planned for the Art Gallery of NSW today. So, I thought I’d wait and see what I stumbled across. I’d also planned a doorscursion to historic Sydney Hospital, which I pulled off along with numerous diversions which will be appearing over the coming weeks. This time, I’ve decided not to share all my doors at once, and to keep something for later. I know that sounds remarkably restrained for an enthusiast like myself. However, I was a bit concerned this week that I’d run out. I don’t know if any of you have ever resorted for a “quickie” and just photographed any old door nearby just to have something to post. However, I don’t want to get to that point. In a world jam-packed full of doors, my well should never be allowed to run dry!!

While you might think that by going to a train station we’d be photographing trains,  since this post is for Thursday Doors, we’ll photographing doors instead. Unfortunately, they’re not the most exciting doors. Indeed, they barely rate compared to most of the doors I photographed later on. However, unlike some of the other door sequences I took today, my photos of Central Railway tell a quick story. Or, in Aussie parlance, they’re “a quickie”. 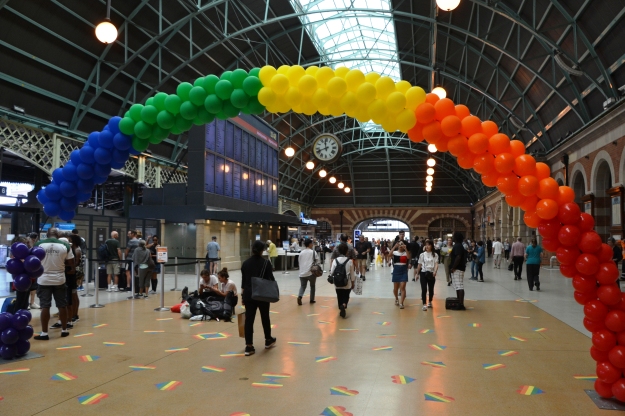 However, before we get to the doors, I spotted a colourful rainbow arch in the foyer . I love rainbows and truly revel in rainbow colours. Well, at least I would if our society wasn’t so conservative and so ashamed of colour. Of course, the fact that I might wear all my colours at once if left to my own devices, has nothing to do with it. Anyway, the rainbow arch is in honour of the Gay & Lesbian Mardi Gras and the parade will be held tomorrow night. I have to admit I love rainbows just for themselves, without any other meanings added on or being appropriated by any particular group. Rainbows are like butterflies, birds and the colour pink and shouldn’t belong to anyone.

Anyway, I still haven’t actually found any doors. So, I’d better get a wriggle on, especially as I was actually on my way to the Art Gallery of NSW. 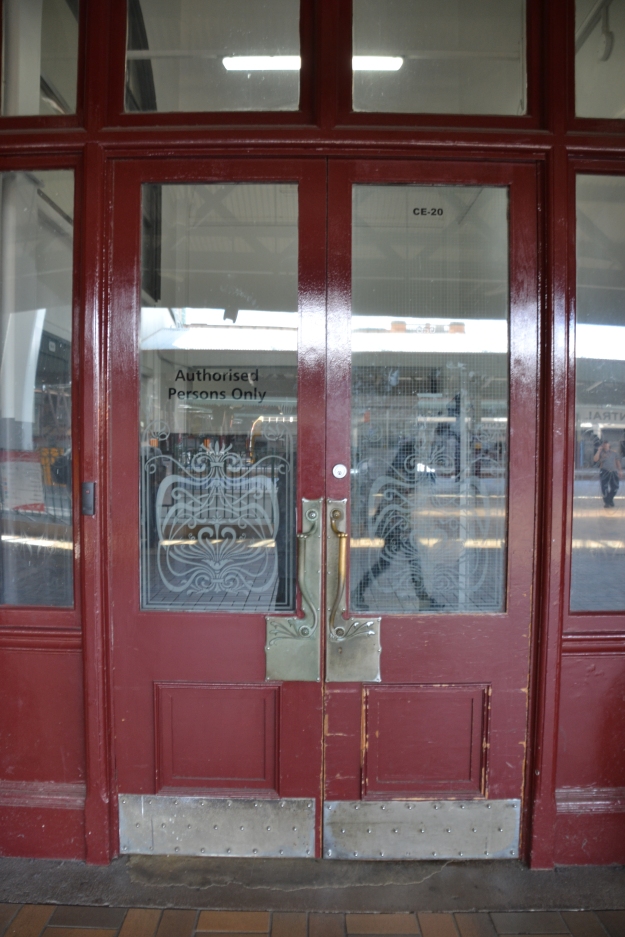 Here’s a close up of the handles, which I’m thinking were originally brass-plated and the brass has worn off over the years. 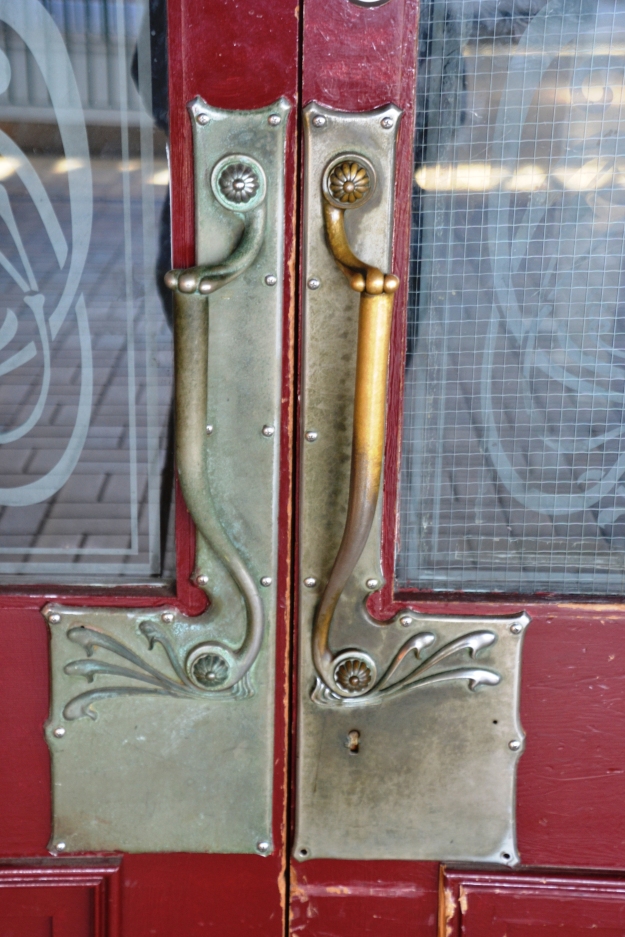 In addition to this historic door, I also found a filled-in door. I must’ve been getting desperate by the point. I was only passing through Central and only popped through the turnstile to powder my nose. 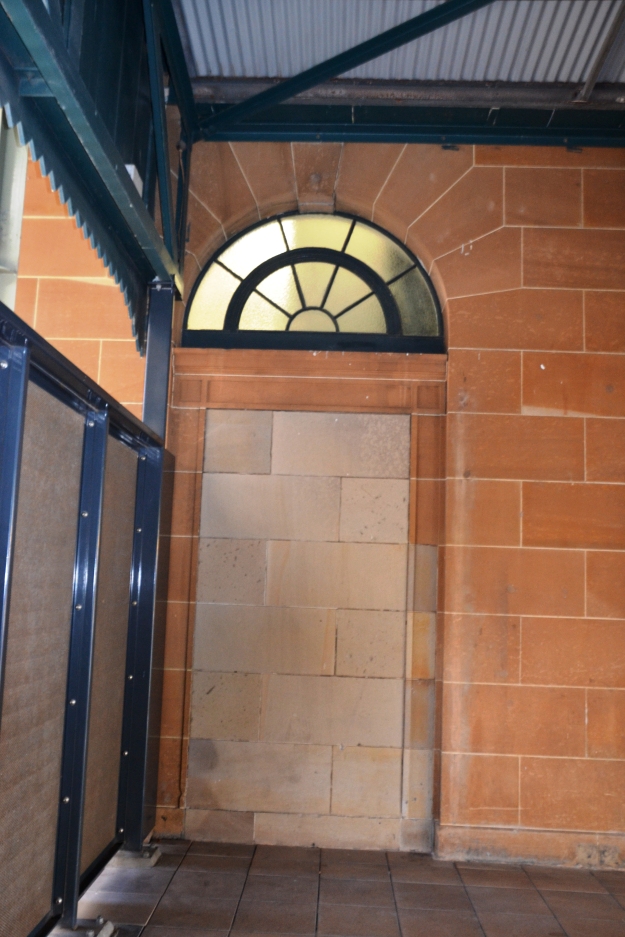 The next one isn’t strictly a door and is more of a doorway, but that’s close enough as far as I’m concerned. 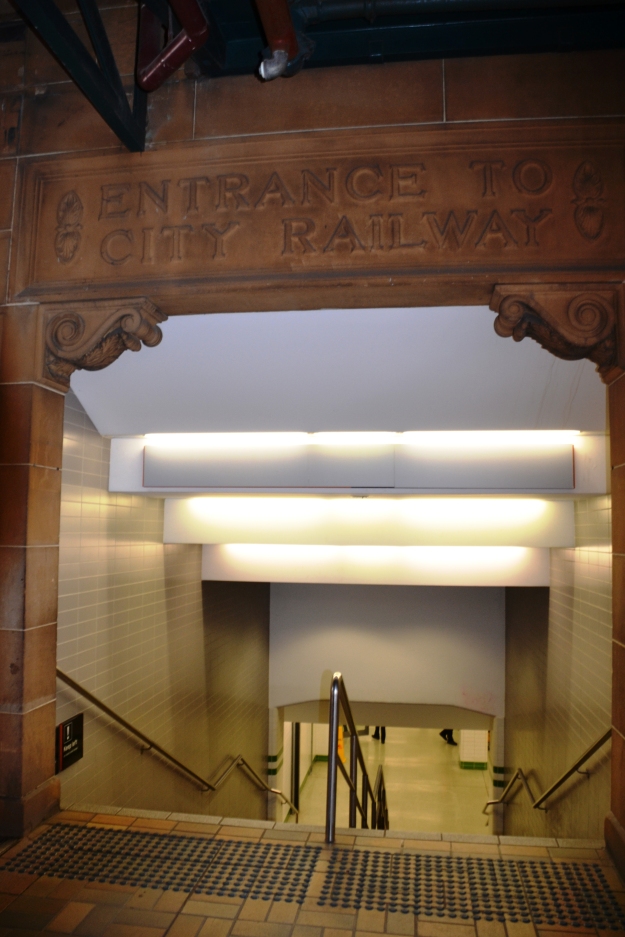 And there’s one last door… 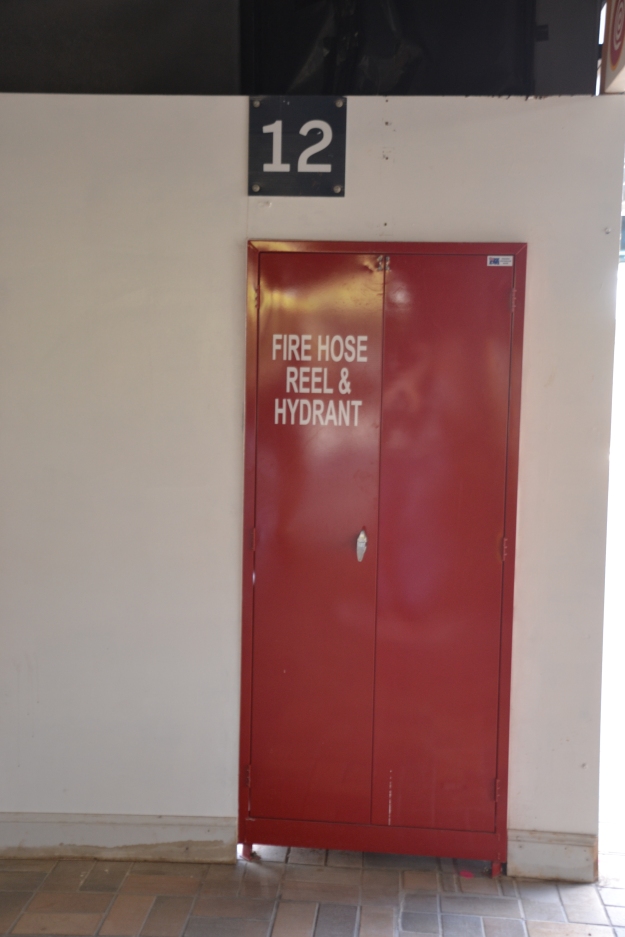 I’m sure there must be many more photogenic doors at Central Station. I just haven’t found them yet.

Well, I hope you’ve enjoyed your visit to our place. This has been another contribution to Thursday Doors hosted by Norm 2.0. Why don’t you come and join us and share a few of your favourite doors. It’s a lot of fun and helps you see parts of the world you’ll never get to visit.

Welcome to Day 24 of the Blogging A-Z April Challenge…”X”.

While “X” has traditionally “marked the spot”, “X” became understandably tricky when it came to continuing our alphabetically travels around Tasmania. There were no places starting with X in Tasmania and we’ve already mentioned a beach shack called “Xanadu” during our travels at Doo Town in Eaglehawk Neck.

So, I needed to be a bit creative, even inventive and in the process, I could well have over-extended my creative license, ending up with a fine.

This left me with Railway Crossings and when you look at the sign, there is a very definite X. Although we do have a local railway crossing, most of the old railway crossings have been removed in New South Wales and replaced with bridges. However, they’re very common in Tasmania, unlike passenger trains. If you start looking for passenger trains in Tasmania, you’ll be waiting an eternity in quite the literal sense.

There are no conventional passenger trains in Tasmania and services stopped back in the 1970s and there’s seemingly no hope of them opening up again.

However, freight trains are still operational.

While we didn’t spot many freight trains while we were there, we observed loads of track, mostly running right along the coast and to be perfectly honest, scarring the landscape. Although I get that Tassie’s quite hilly and train’s down like climbing mountains, it seems a pity to have sun pretty coastal scenery dissect by track and I’m sure it’s something Wordsworth would have lamented.

Geoff’s mother grew up beside the railway track in Scottsdale in NE Tasmania. She had to walk the cows across the railway line to the other paddock. She used to have nightmares about the cows getting stuck on the line and being hit by the train. That was back in The Depression the 1930s and their cow was about the only thing making money when her Dad was in between building jobs and tin mining. Losing the cow, would’ve been a serious financial blow.

However, those trains through Scottsdale turned out to be a blessing in disguise. After growing up in Penguin on the North Coast, Geoff’s Dad was working as a lad porter with the railways and was sent to Scottsdale, bring his parents together.

Anyway, as I mentioned earlier, I’m extending my creative license today and we’re actually heading off to the Don River Railway near Devonport. While railways and trains don’t exactly start with X and I can’t remember whether there were any actual railway crossings when we were there, this was too good an opportunity to pass up. 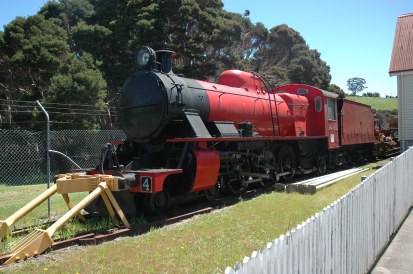 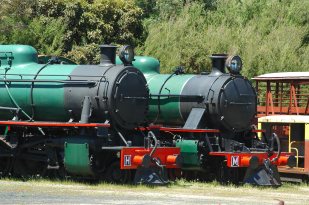 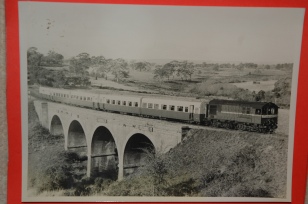 So this means we’re driving from Wineglass Bay to Don River Railway, near Devonport, which is a 2 h 38 minute drive (231.1 km) via National Highway 1.

We last visited the Don River Railway back in 2005, although we’d really wanted to get there in January and ran out of time. Indeed, it was down to the clock hoping we could squeeze it in after stocking up on Lavender Cheese at Ashgrove Farm and saying goodbye to family and having a rushed picnic with friends before boarding. As you’re starting to understand, our trip to Tassie in January was hypo-manic. Yet, still we missed so much!

The Don River Railway is located on Forth Road, Don, Tasmania.  To give a brief history:

“the Van Diemen Light Railway Society was formed in December 1971 as a voluntary organisation with the basic aim of preserving a representative selection of former Tasmanian Railway equipment for future generations to enjoy. After much searching for a suitable site the society decided to use the track bed of the former Melrose line and began trading under the name “The Don River Railway”. The railway was established on the Don site in 1973, and trains commenced running in November 1976, the achievement and result of countless thousands of hours of voluntary labour provided by members of the Van Diemen Railway Society Inc.” http://www.donriverrailway.com.au/history.html

Meanwhile, on the home front, my laptop has taken a nasty hit. The power cord was partially severed by the recliner mechanism in my chair. For what seems like the last month, I’ve been able to jiggle things but it died completely two nights ago. I’ve since been told it’s the third power pack I’ve destroyed this year and I have to “wait”. So, I’m back on my much faster desk top and a day behind on the A-Z.

I must admit that after a month of deeply immersing myself in Tasmania, I’m feeling that the blog has become rather disjointed and out of sync with “the real world” and  what’s going on in the here and now. That’s been especially true in the last week as I’ve been away again, exploring new old worlds. Our daughter attended a three day dance camp at Kurrajong in the Blue Mountains and I ended up exploring the area, along with historic Richmond and Windsor. However, they’ll have to wait until next week.

Meanwhile, I’m off to pick our dancing girl up again and hunt down dinner at the supermarket.