If we were having coffee today, I’d be asking you: “Would you like Gold with that?”

After all, the the Rio 2016 Olympic Games are in full swing and today, I was watching the swimming live from the couch. Australia has taken out a bronze in archery but I was here in front of the box when Mack Horton romped home to take Gold in the 400m freestyle. Our Australian swimmers in the Women’s 4 x 100 Freestyle relay soon won Gold and also broke the world record. That really had me leaping from my seat: “Aussie! Aussie! Aussie! Oi! Oi! Oi!” 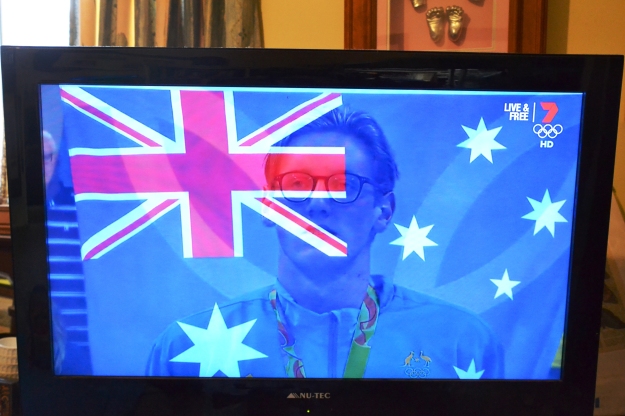 Australia is currently at the top of the medal tally and I’ll enjoy it while it lasts. Of course, I put a lot of hard work into my training routine!

Here’s my Olympic coverage: Gold From The Couch. 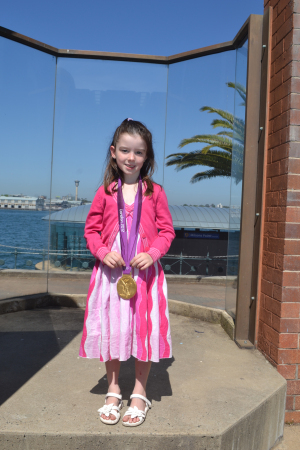 Not that I’m showing off, by here’s my daughter wearing Cate Campbell’s Gold medal from London 2012. We met Cate at a fundraiser for Muscular Dystrophy “Fill The Boot”, which was run by the fire brigade. The last leg of Fill The boot was held at North Sydney Olympic Pool with Cate Campbell racing against X Factor host Luke Jacobz as well as swimming a demonstration lap. I’m not into swimming but even I could appreciate the difference. Knew I was witnessing the world champion in action. You can read more at: The Niceometer and Fill The Boot.

Meanwhile back at the ranch…

Last Wednesday was Open Day at my daughter’s school. The day began with a gala performance with our daughter performing with the senior choir, orchestra, string and dance groups. Proud Mum was watching through the zoom lens, taking photos. It’s my way of saying: “I love you”, even though she might hate it and no doubt that’s why she’s labelled me “embarrassing”. Afterwards, we went back to her classroom. The must-see was the robotic cars the kids have made for a race at Newcastle University next Saturday. Not as many artworks not that she’s getting older, but still a primary schoolroom.

Open Day at the high school for our son was cancelled due to the rain.

Writing-wise, I have been beavering away on a short story for a local competition, which was due on Friday. Unfortunately, I can’t post it here but I can share my angst trying to knock off 300 words to reach the 1500 word limit and repeating and repeating the process in the last day as I fine tuned it all. I’ve never murdered so many adverbs and adjectives in my life but I didn’t want to delete any of my complications as I really wanted to tension to reach boiling point. 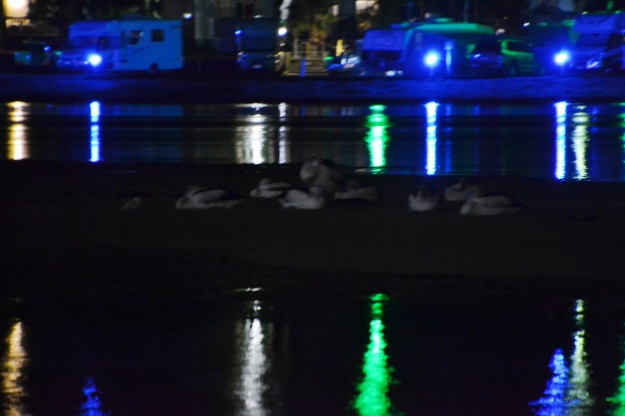 Pelicans Sleeping at The Entrance After Dark- Photo Geoff Newton.

Saturday afternoon, our daughter had a birthday further up the coast and so we went out for dinner at The Entrance. I remember going for a holiday there as a child. It gets it’s name as it’s located where Tuggerah Lakes enters the Tasman Sea via a narrow inlet. The Entrance also has a sandy, ocean beach. We had a fabulous Spanish meal and I fully immersed myself into a seafood paella with muscles, prawns and tender squid! Yum!

You can read more about our night at The Entrance here.

However, as soon as we left the restaurant, my mobile rang. Lady, our recalcitrant black dog, had escaped yet again and had been found. We were over an hour from home so we asked them to put her back in through the gate and hoped for the best. She was actually still there when we arrived home. My husband has been blocking up all sort of holes and gaps over the last two weeks and she’s still getting out. We have no idea how she’s getting out now and we’re starting to wonder if she can fly. Perhaps, she flaps those long, floppy ears of hears and takes off. As crazy as that sounds, that mutt seems deceptively daft and given her propensity for mischief, it wouldn’t surprise me if she was actually incredibly smart.

This will be my last Weekend Coffee Share coming from my navy, leather couch. We spotted a temporary replacement at the Op Shop last weekend and it arrives Wednesday. Tomorrow night, the couches go out beside the road for council cleanup, taking their stories with them. There’s the cushion that flew out of the trailer on the freeway moving up here when it was still pretty new and treasured. Geoff had this couch when we first met and I’ve breastfed the children in it, read them stories and struggled with my mobility issues trying to get out of it at times. At about 20 years old, however, it was time for it to go to the great sofa heaven in the sky. That said, I still don’t want to be home when the truck munches it up, converting it into landfill…sob! It’s so brutal.

How about you? How are you going? Have you been watching the Olympics? Read any good books?

This has been part of the Weekend Coffee Share hosted by Diana at Part-Time Monster. You can click the linky  to read the other posts.

In what was an unforgettable moment, here’s our daughter holding Cate Campbell’s Gold Medal from the London Olympics.

Congratulations to Cate, sister Bronte, Brittany Elmslie and Emma McKeon who took out the Gold Medal and World Records in the 4 x 100 Freestyle.