This morning, we rocked into our local bookshop to meet Australian rock legend, Jimmy Barnes,  lead singer of Australian rock band, Cold Chisel. Jimmy’s just recently released his memoir: Working Class Boy. (By the way, as I read those lines out in my head, I’m hearing the voice of Molly Meldrum,  the inimitable host of music show Countdown back in the day.)

So, what do you say when you meet a rock legend and you’re way too old to even think about throwing your underwear anywhere but the dirty clothes basket? When you’re visiting your local bookshop and meeting him as an AUTHOR…a rock legend in a different guise.

I’m not there as a gushing groupie but as a reader who loves his writing and is madly underlining bits throughout his book and loving his writing style as much as his storytelling abilities.

Indeed, meeting Jimmy Barnes the author is a long way from singing  “cheap wine and a three-day growth” at the top of my lungs at  Schoolies’ Week,  Surfers Paradise back in the Summer of 1987.

Rather, through the book I’m meeting James Swan, the little boy behind the legend. A little boy growing up on the battlefields of Glasgow as a “working class boy”.

To be perfectly honest, while reading his story , compassion was swelling inside my heart wanting to burst its banks.  I wanted to hug that boy, stick a bandaid on his heart and do want mothers do to make their own kids feel better. I also wanted to tell that young boy that it’s going to be okay. That he’s going to find his way out. That despite the war and violence of his childhood, that he will find a place beyond numbing his soul. That while he mightn’t completely escape his battle scars,  that he will find love, family and some kind of peace…along with the trappings of being “Jimmy Barnes” and Cold Chisel.

As he said: “Life’s good…I’m fit, I’m healthy, I’m doing yoga – who would have thought? Yoga and medication … I mean meditation! And the family’s great, Jane’s great. And I think I’m singing better than I’ve ever sung…” https://www.jimmybarnes.com/biography/

Not unsurprisingly, Australian actor and author, Magda Szubanksi described Working Class Boy as: “Viseral, brave, honest: it’s like Angela’s Ashes  meets Trainspotting– only more brutal. A deep, guttural  howl of a book, it speaks of the pain and hurt that haunt so many men. And it may just save lives”.

I sure hope so because I know there are many of us who’ve yearned to feel numb. Stop the unending anguish and feel nothing at all.

Reading the book, my heart is breaking. Forget that he grows up to become one Australia’s greatest ever rock legends with legions of fans. He was once a boy battling on the streets of Glasgow where violence was a way of life. Indeed, they lived and breathed violence.

How could anyone survive this?

I know what doesn’t kill us makes us stronger but hey, these days we think twice before letting our kids ride their bikes on the streets or go to the park… even if we’re with them. We read aloud to them every night and keep telling them we love them. We might also tuck our kids into bed a night, kiss them on the cheek and wish them sweet dreams. It’s not a perfect world and domestic violence is huge. Life is no picnic for many families in Australia now, but that wasn’t my childhood. My Dad was my hero who could save me from anything and anyone and my Mum was mild-mannered. Wouldn’t throw a look at someone else, let alone a punch.

However, there’s no bubble wrap on the streets of Cowcaddens, Glasgow.

If you are old enough to remember the chilling murder of two year old James Bulger[2] by two ten year old boys, you can’t help seeing the similarities with what Jimmy survived. When he was four “myself and another kid of about the same age made the mistake of walking out of our street into the next without an escort.[3]”  “Next thing I knew I was running as fast as I could, dodging a hail of rocks and glass, but I got away. My friend was still frozen and couldn’t move at all. They pelted him with rocks and bottles until they were bored and then they cut him up and set fire to the shelter. He ended up in hospital for a long time…Was life in Scotland that bad that even little kids had no chance? It seemed no one had a chance.[4]”

Jimmy’s world was brutal. Not that he throws blame. It was what it was and he shares that journey with a dark wit and the philosophical insights you’d hope for from a songwriter, who releases the cry of the heart through music.

So, what did I say to Jimmy?

Well, before I get to that, let me tell you what’s been running round inside my head in the lead up.

I’d been told that they’re trying to get 200 people through the bookshop in 2 hours and when I said I was thinking of bringing down my son’s guitar for a photo, it was suggested that was a bit over the top and that it was going to be a very fleeting meet and greet. 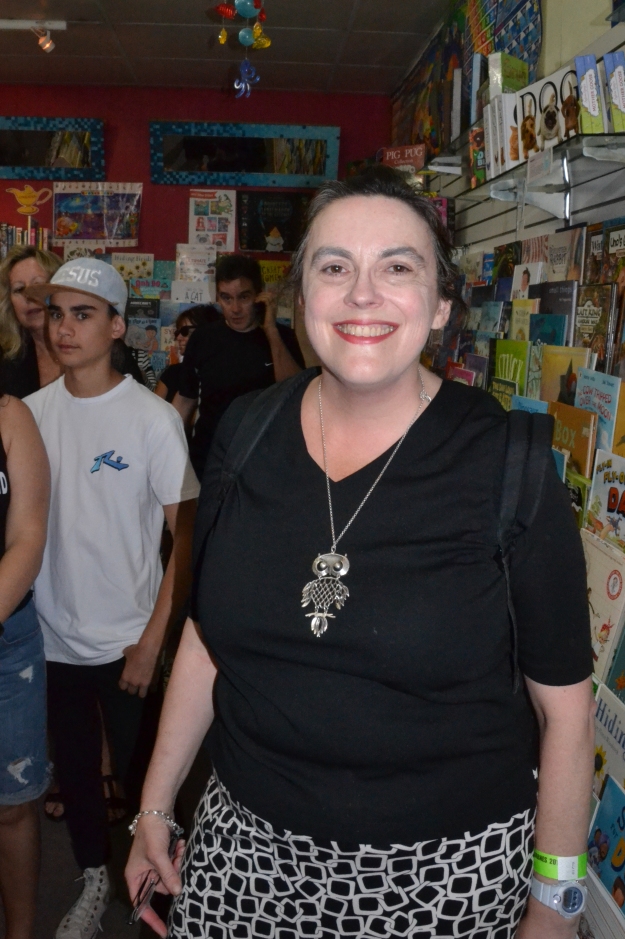 Queuing up to see Jimmy Barnes at Book Bazaar.

So, I was intrigued about what, if anything, I would pick up about Jimmy Barnes the person when he was just a face, a signature and the next person was literally breathing down my neck and the “queue Police” would have me out the door before I’d even smiled for the camera.

Obviously I wasn’t expecting much. I mean…how can you connect with someone in seconds? And besides, we’re talking about an uber-famous King of Rock. Sure, I might be reviewing his book for my blog but aside from my long lens, I was a nobody in a very long line of nobodies.

I had read some of his book and that made me A READER. It seems even Jimmy Barnes appreciates his readers. Values someone who isn’t just there for an autograph and a selfie, but has actually stepped inside the cover and read his story.

So, as he’s signing our book and the queue cop has doubled as a photographer capable of handling my Nikon SLR without flinching (they always have to ask me where the button is), yours truly doesn’t address Jimmy Barnes the rock legend but Jimmy Barnes the boy and says:

“As I was reading your book, I wanted to hug the boy. Give him a matchbox car. Something. “

I should’ve been embarrassed about my gush of emotion but since I’ve never been the cool kid, why start now?

Then, Jimmy looked up at me. Looked me right in my eyes making contact. Not just eye contact, but that experience of two souls meeting and said: “we survived”.

My husband Geoff said that once he saw that I’d read the book and spoke to him from the heart, his whole demeanour changed. I shook his hand and there was warmth, personality and a moment just between the two of us. So, it was there in a crowded bookshop in a long and winding queue, that I knew that I’d really met Jimmy Barnes.

I feel so blessed.

Do you have any memories of Jimmy Barnes and Cold Chisel? I’d love to hear them. I will be following this up with a more detailed review soon but if you’ve read the book, please share your thoughts and any links.

Here are a few of my favourite songs:

[2] James Patrick Bulger (16 March 1990 – 12 February 1993) was a boy from Kirkby, Merseyside, England, who was murdered on 12 February 1993, at the age of two. He was abducted, tortured and murdered by two ten-year-old boys https://en.wikipedia.org/wiki/Murder_of_James_Bulger.