This afternoon at 1600 hours, our son set sail on board the Young Endeavour out of Geelong bound for Sydney on what’s going to be the adventure of a lifetime, and we’ll be collecting him in nine days time in Sydney. Just to put you in the mood, check this video of the trip out: https://www.facebook.com/YoungEndeavour/videos/389567701984131

Our story begins back in January 2017 (now Five years ago), when we went to see the Young Endeavour in Stanley, Tasmania while we were on holidays. Aside from our daughter, we’re a sailing family and my Dad also sails. So, we were pretty keen to check her out.

However, the weather conditions at the time were pretty treacherous. Stanley is on Bass Strait between Australia and the Australian Mainland, and it gets rough. It also gets very windy, and Stanley was blowing at her best that day. All of this meant we weren’t allowed on board. However, we did have a chance to speak to some of the youth team, and we heard about the ballot system which is used to secure yourself a berth. It all sounded like an unlikely gamble, and what were his chances of being lucky enough to be drawn out of the hat? However, to use another hat analogy again, you’ve got to throw your hat into the ring to stand a chance. I made a mental note to myself to make sure we didn’t forget to apply when he was old enough.

Recently, while I was sorting through some paperwork, I came across the postcard we’d picked up in Stanley and places were open. I didn’t need a second thought. I was filling out the paperwork online and I can’t even remember whether I asked him about it. I probably did. However, a set of car keys was missing at the time, and he was otherwise occupied. Besides, I didn’t really expect him to be offered a place straight away, and if he was ever going to be lucky enough to get a spot, it might take a few years. However, the very next day I received an email. He was in. He was really excited and thrilled to be doing it. So, it was full speed ahead.

There was just one very small minor detail which remained. He had to pass a PCR covid test last Friday, and what I didn’t know, is that he also needed to pass a RAT this morning before he could board. So, there was every chance that after winning the lottery to get a spot, he might be let down just as he was about to board. Fortunately, I think they all passed, but wouldn’t that have been awful to have your dream go up in smoke like that at the last minute?!! (Covid has a lot to answer for!!) However, that was all good, and at 3.00pm (known as 1500 hours in Navy lingo) he climbed on board.

Unfortunately, I couldn’t be there in person because Miss had a dance audition locally. However, Geoff compensated very nicely by having me on FaceTime and I was standing with him dockside watching him climb on board, having a bit of a welcome ceremony including introductions, and then they raised the gangplank, untied the ropes and motored off into the pending sunset. (I must say I was surprised a replica of The Endeavour came with a motor, but I bet there are lots of mod cons on board belying the outward appearance and history of the ship.)

The ship itself is under the command of members of the Royal Australian Navy, but the young sailors or “Youthies” as they’re called, are trained up along the way and on the final day, they take charge of the ship, which sounds both thrilling and terrifying. In addition to the regular staff and the youth, there are also two naval staff doing a “suitability voyage”. Staff are assigned to the Young Endeavour for 18 months to two years, and they’re on board to see if they’d like it, and there was a comment: “No pressure guys. Just a ten day interview”. I was also pleased they have a navigator on board, even though poor Mister has been needing to give his grandmother and myself directions since he was just a little tacker.

In addition to all the sailing aspects of the trip, there are also some additional details which, as my Dad used to say will “put hair on his chest”. First and foremost, they’re not allowed to access their mobile phones on board. Now, just think about how that would impact most of us. For many, it could well be on par with giving up smoking cold turkey. Mister is also a gamer. So, none of that for a week either. Now, you’re talking about serious deprivation. However, the flipside of that will be liberty, conversation and face-to-face interaction. They’ll also be climbing straight up a vertical cliff metaphorically speaking but they’re all in it together, which should foster strong bonds. However, after nine days, probably also some irritation factor too. I hope they all packed their deodorant.

For those of you with an interest in sailing, adventure, or just want to keep up with the trip, the Captain does a Captain’s Log every night which goes live at 22:00 Australian Eastern Daylight Time (AEST). Here’s the link: https://youngendeavour.gov.au/the-voyage/captains-log

I also thought you might appreciate this Youtube video where Lieutenant-Commander Andrew “Kenny” Callandar, Commanding Officer gives some wise tips on leadership skills. It starts out with “Don’t be someone you’re not”. Great advise for us all really. Here’s the link: https://www.youtube.com/watch?v=UQXkICIWtVQ&list=PLLPshwXEivQ2logIPpZ7dukcDpSvJuz9Y&index=1

By the way, for those of you who are new to the blog, I should explain that I’ve been writing this blog for ten years from when Mister was eight and Miss was six. I didn’t want to use their actual names, and these alternatives seemed to fit quite well back then. However, he recently turned 18, and he clearly needs an update. I’m working on it.

Lastly, if any of you have been on board the Young Endeavour and have any stories to share, I’d love to hear from you.

Seizing the day yet again, we drove down to Sydney on Saturday to tour HMAS Toowoomba, which was open to the public as a fundraiser for a group of children’s charities called Kids in Need. These charities included Muscular Dystrophy NSW, which assists me with managing my dermatomyositis, which is a neuro-muscular condition. Unlike Muscular Dystrophy, there is treatment for DM, although not always as effective as we’d like. 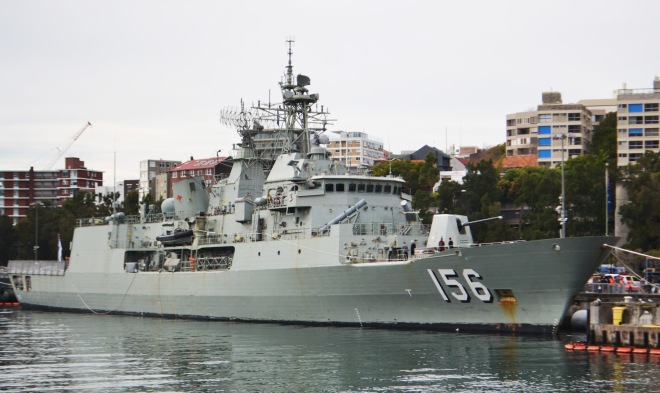 The Police were all waiting for Mister to turn up.

HMAS Toowoomba was docked at Garden Island, in Sydney Harbour. Garden Island is located to the north-east of the Sydney central business district and juts out into Port Jackson, immediately to the north of the suburb of Potts Point. Used for government and naval purposes since the earliest days of the colony of Sydney it was originally a completely detached island. It was joined to the Potts Point shoreline by major land reclamation work during World War II.

The kids at the entry to base.

Garden Island is so-called because it was planted in 1788, in the first months of European settlement in Australia, to serve as a kitchen-garden by officers and crew of the First Fleet vessel HMS Sirius.[2] Initials carved into a sandstone rock on the site are believed to be the oldest colonial graffiti in Australia, comprising the letters “FM 1788,” representing Frederick Meredith who served as Sirius‍ ’​ steward.[3]

Frederick Meredith carved his initials into the rock at Garden Island in 1788, the year the First Fleet arrived in Sydney.

HMAS Toowoomba (FFH 156) is the seventh Anzac class frigate of the Royal Australian Navy (RAN). She was laid down in 2002 by Tenix Defence Systems and commissioned in 2005.

In 2007, Toowoomba was deployed to the Persian Gulf as part of Operation Slipper. Her second deployment to the Middle East occurred during the second half of 2009. As part of this, she became the first RAN vessel to operate with the counter-piracy Combined Task Force 151. 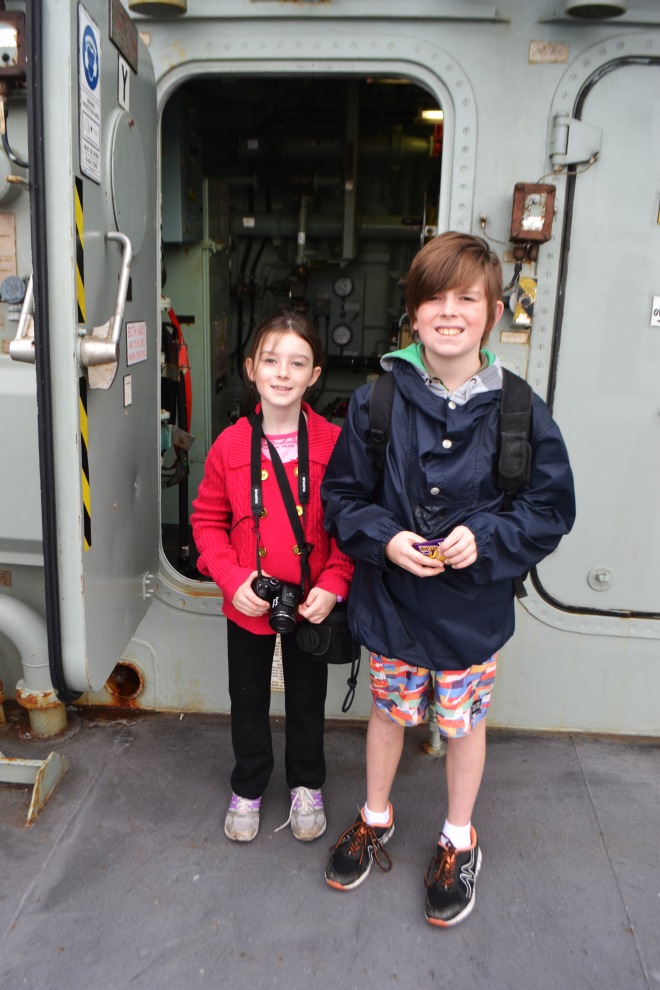 If you look behind the kids, there is either the perfect location for hide & seek or time out.

Geoff testing out their breathing apparatis. 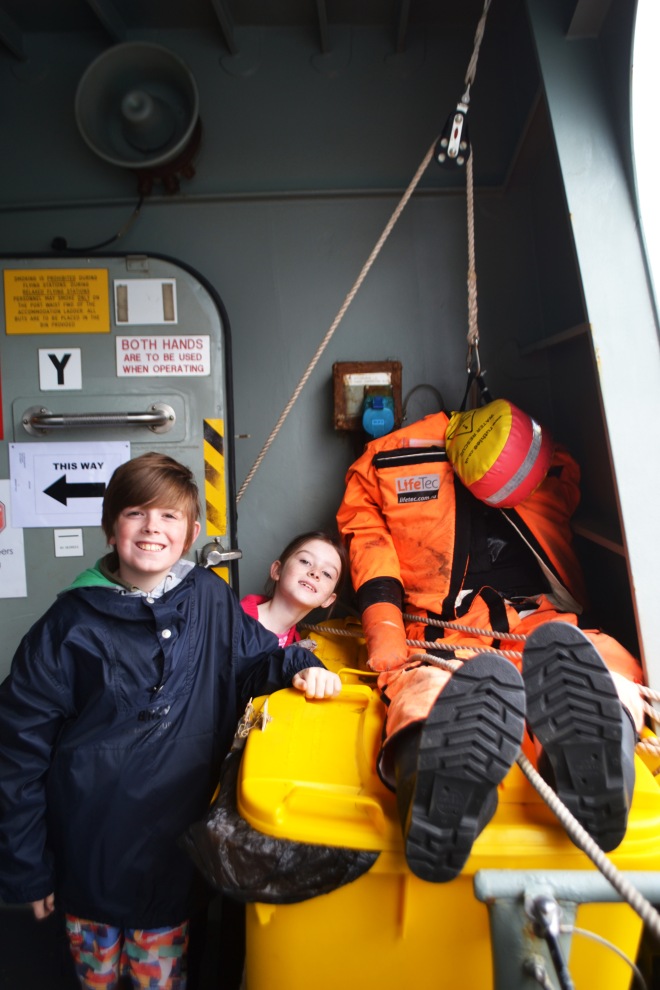 The kids with “Oscar” their crash test dummy. He leads quite a rough life and has had 4 incarnations in the last 12 months. Apparently, a shark got his hands.

Miss is now ready to put out any fires onboard.

I was absolutely stoked at being able to make it up this ladder. A testimont to the power of prednisone and being in remission. 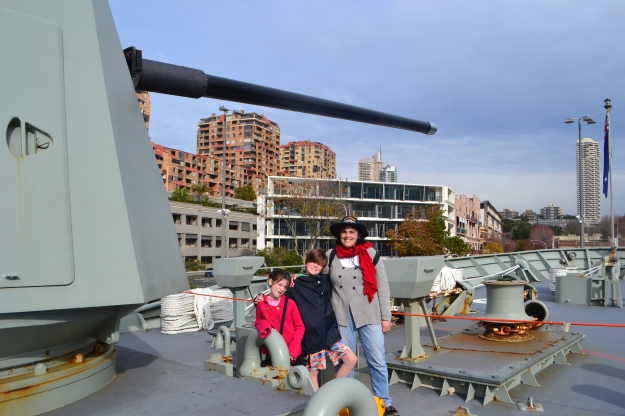 Standing under the “cannon”, or whatever you call it.

Obviously, we had a fabulous day out and would liike to thank everyone who made it possible!!