Welcome to Rumford, Maine where we’re chatting with ferry master Jerry Putnam and his dog, Major beside the Androscoggin River. Major is a New Foundland or “Newfie” and while I’m used to big dogs, Major is more like a bear crossed with a tank and yet he’s very friendly. 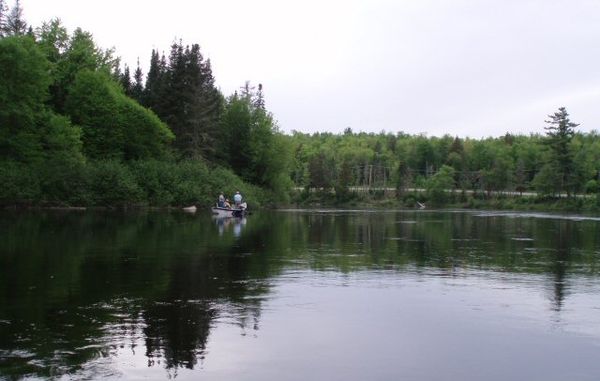 Please be advised that you’ll be needing to set you watch back more than just a couple of hours to join me on this trip. You see, we’re traveling back to 1885 or thereabouts to hear this tale.  By the way, I apologise if the details get a little sketchy on this trip. You see, I’ve never been to America and I’ve never seen a Newfoundland dog beyond Googles images. However, I’ve never let that stop me from spinning a yarn before and it won’t stop me now. I stumbled across this story online in a small Australian country newspaper from 1885. I have no idea how it found its way there but it seems that after all these years, I’ll be sending the story all the way back to Rumford, Maine where I hope it finds a new home.

As you might be aware Newfoundlands are excellent and enthusiastic swimmers and are famed as the lifesavers of the sea. Indeed, there have even been some famous and very impressed rescues carried out by Newfoundlands:

You can watch some Newfoundlanders going through their rescue paces here: https://www.youtube.com/watch?v=1oQzXJ5ldRM

By now,  I’m sure I’ve whetted your appetites sufficiently and you’re all just longing to find out what Major did. What act of great heroism plucked this ordinary dog out of obscurity and onto the pages of a distant Australian newspaper? 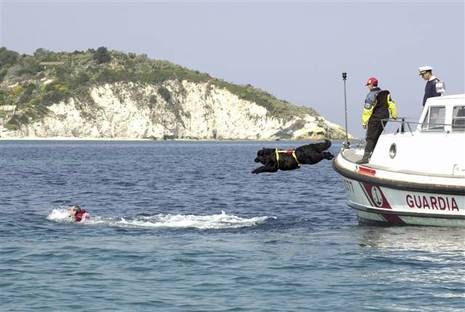 However, there’s an exception to every rule. Just because some dog’s profiles read like a brochure from the Kennel Club, there’s always an exception. Just as people don’t like being categorized, stereotyped or told how they should conform to type, dogs can be much the same.Not that Major almost drowned but he did have a different interpretation of what constitutes a “rescue”.

After all, what constitutes a rescue? Is it just about saving that drowning person from the surging waters? Or, is it also about encouraging someone to overcome their fear of drowning,  let go of the edge and finally learn to swim? What if that person doesn’t respond to “encouragement”? Is it okay to add a bit of persuasion? A nudge? A tug or even the proverbial cattle prod?

Well, you don’t need to ask Major. When it came to helping his canine counterpart overcome his fear, he was a Dog of Action with no time for philosophising, desensitization or phoning a friend. When a brindle hound was too scared to swim out to its owner on the ferry and was howling on the shore, Major grabbed it by the scruff and threw it in the water so it either had to sink or swim.

You’ve got to laugh and who hasn’t been tempted to do that to someone we know, but a bit of compassion doesn’t go astray either.

So, even if another dog is having a full blown panic attack about getting their precious paws wet, you don’t grab him by the scruff and throw him in the drink. After all, most breeds of dog don’t have a Newfoundland’s webbed paws, innate love of swimming and other special design features. They chase sheep. 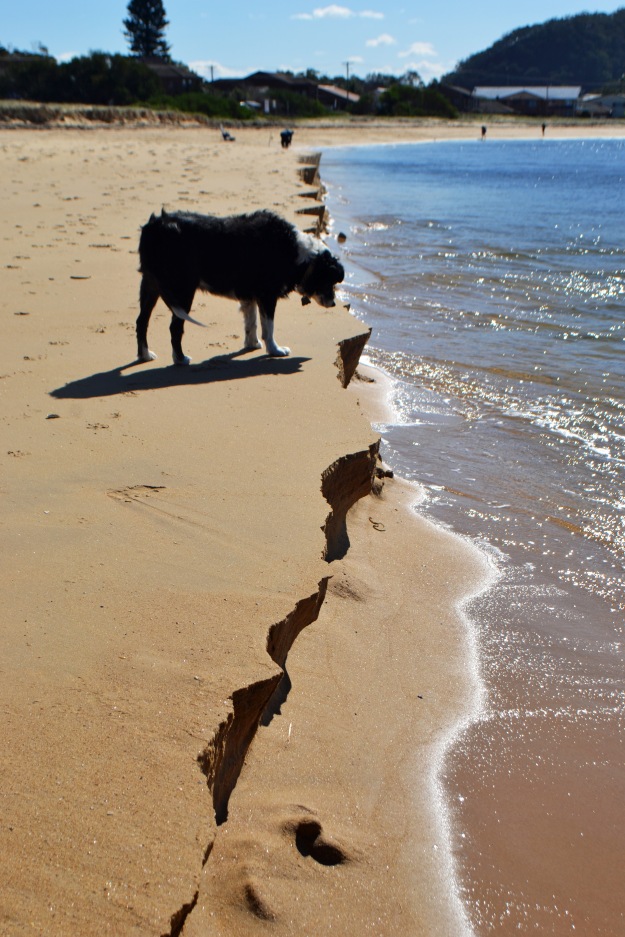 I’m not putting my paws in there!

Of course, this includes the Border Collie. While our last Border Collie loves chasing sticks through the surf, Bilbo rarely gets his paws wet and it’s taken a lot of angst for him to get to the point where he sometimes now retrieves his ball out of the wash on the beach.

Indeed, Bilbo has had a few newsworthy water avoidances and he could well have been cast as that miserable mutt Major threw into the river. 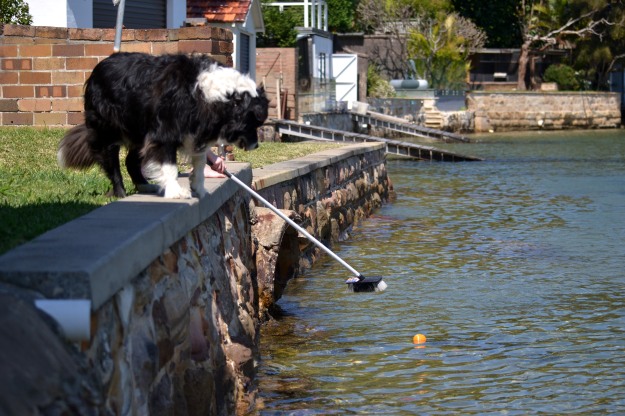 Finally some assistance. Miss puts Bilbo out of his misery!

A few years ago, when Bilbo saw us all kayaking from the backyard at Palm Beach, he also started howling and fretting just like that other poor hound. Bilbo chewed through the back gate, jumped the back fence and we were about a kilometre from home when we looked out and kids said: “Someone else has a Border Collie”. As we paddled closer, our fears we confirmed. It was our freaked out mutt, giving us the paw: “What do you think you’re doing going out there on that crazy contraption? OMG!!!! You could fall in. Drown!!!! Then, who’s going to feed me?” His heart was racing. He was puffing. The dog was a wreck…so was the gate!

I would never have thrown Bilbo into the water to get him used to it. Yet, over time, he accidentally fell in the pool chasing his ball. He also fell out of the kayak and took our son into the water with him. That could’ve been nasty because he tried grabbing on to Mister which could’ve pulled him under. However, through all of this knockabout exposure and by being part of our family, Bilbo isn’t quite so anxious anymore. He’s stepped out and started filling out those paws, becoming a brave dog.

When Jerry Putnam had charge of the ferry At Rumford, Me., over the Androscoggin River, he owned one of the handsomest Newfoundland dogs I ever saw, and the dog was as intelligent as he was handsome. Like all of his kind, he was fond of the water, and further than that,  he manifested an absolute contempt for those of his species who shrank from the aqueous element, and it is of one of those contemptuous manifestations that I wish to tell, for I was there and saw.

The ferryboots, of various sizes, to, accommodate different burdens, were impelled by means of a stout cable stretched from shore to shore, as that was the only device by which the heavy boats could be kept to their course in times of strong currents, and during seasons of freshet I have seen a current there that was wonderful.

One warm summer day, while a few of us were sitting in the shade of an old apple tree, between Jerry’s house and the river, two gentlemen, with implements for hunting and fishing, came down to be set across, and straightway one of the boys went to answer the call. He selected a light gondola, the two gentlemen stepped onboard, and very soon they were off ; but before they had got far away from the shore a common brindle house dog came rushing down upon the landing, where he stood and barked and howled furiously— furiously at first, and then piteously.

The boat was stopped, and from the signs made we judged that the strange dog belonged to one of the passengers. Yes, the owner was calling to him to come.

But Ponto didn’t seem incline to obey. Instead of taking to the water, he stood there, on the edge of the landing, and howled and yelped louder than before.

Presently old Major — our Newfoundland; who had been lying at our feet, got up and took a survey of the scene. Jerry said only this—’What is it, Major! What dy’e think of it?”

The dog looked around at his master, and seemed to answer that he was thoroughly disgusted. And then he started for the boat-landing — started just as the boy in the boat, at the earnest solicitation of his passenger, had begun to pull back. With  dignified step, Major made his way down upon the landing, proceeded directly to the yelping cur, took him by the nape of the neck; and threw him — he did not drop him — but gave him a vigorous, hearty throw, far out into the water ; and when he had done that he stood his ground as though to prevent the noisy, cowardly animal from landing. He stood there until he had seen the cur turn and swim towards the boat — until he had been taken on board by his master— after which he faced about, with military dignity and precision, and came back to his place beneath the apple tree.

Have you ever been to Rumford, Maine or had any experiences with Newfoundlander Dogs? We’d love to hear your tales!