Today, I have a little confession. It’s actually almost Monday afternoon here, but there’s no rule that says you have to stick to local time. So, I’m Coming to you to from Boston where it’s currently 8.42PM Sunday and it’s currently 2ºF. It’s currently 27ºC here in Sydney with 80% humidity. The air is so heavy and sticky and it feels like you could literally wring the water out of it,which is all pretty yuck to be honest. Not that I’m wishing Winter would hurry up. It’s more of a case of “rain, rain go away…” 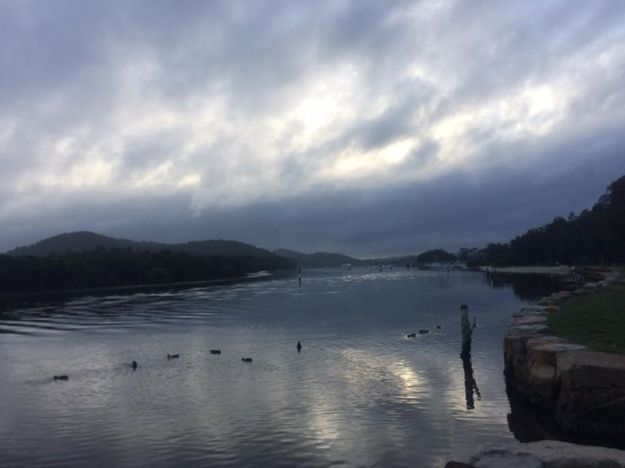 After weeks of seriously heavy rain, the sun started to peer through the clouds this morning and I had to seize the moment.

At the moment, I’m wishing I could find some form of cosmic remote control. Mostly, I’d like to press the pause button for awhile to catch up. Or, a bit like the conductor of an orchestra, get some parts to stop of play quietly so I can focus on something else without being interrupted or feeling I’m needing to split my brain so many directions, that it short circuits.

I know I’m far from being the only one who feels like this so when is some young Einstein or Thomas Eddison going to invent the ultimate device. Or, could I be the one to come up with the ultimate invention? Unless it’s made out of a box of spare cuckoo clock parts or the components of the piano I’m thinking of pulling to pieces, I doubt it. I’d better stick to art and my planned deviation into sculpture.

The last couple of weeks have been very stressful. Not because I’ve had a lot on, but I’ve had some big stuff on and I’ve had to be organized and focused, which isn’t my forte.

At the top of the agenda at the moment, our daughter goes to high school next year. Forget any concerns about my baby growing up. At the moment, the preparation side of things is enough to contend with. In a bid to give her plenty of choice and options, she’s sat for the State selective schools test, but she’s also sitting for selective academic and performing arts tests at our local school. We won’t get the results of the selective schools’ test  until after the offers are made for the local school. So, needless to say, the process by itself is an ordeal and my role is never as simple as “taxi driver extraordinaire”. I’m also chief motivator, enforcer and “punching bag”. Golly! I feel like handing in my resignation already and it’s only march. This process goes on at least until October and longer if she’s on the waiting list.

It’s enough to throw yourself under a bus…”Spare me!”That’s metaphorically speaking, of course!

The other big event this week, was my thirty year school reunion. That was a real hoot. reunion.  I really love going to these school reunions, even though I wasn’t one of the cool kids at school. We’ve all moved on and the girls who gave me a hard time, don’t come to the reunions, which intrigues me. Unfortunately, most of the people they really picked on don’t come either and there are also those who walked out the school gate and never looked back. For me, the usual what to wear problem was compounded by weeks and weeks of severely heavy rain, which was saying hibernate to me. I could’ve worn an eskimo suit there if I’d had one. There was also the shoe issue. I can’t stand long at the best of times and as much as I would’ve liked to wear the pretty shoes, I had to go with the sensible shoes. This ended up being quite interesting as I ended up almost feeling short, when I’m usually tall. Some of those heels were like towers. Anyway, I enjoyed catching up on anecdotes from the past and they had scanned in a series of letters to Charles and Di a class had written for the Royal Wedding. They’d got married when I was in 6th class and I clearly remember the insane obsession the world had with Diana, which was such a part of those school years. I clearly remember one of my friends saying her Gran had taken her off for a Lady Di haircut but she had a cowlick in her fridge and it didn’t really come off.  The teenage years are a bit like that though. So much never really comes off.

I should mention, that there was talk about actor Hugh Jackman at the reunion.  Of course, there had to be. He was our local heartthrob. As much as there was talk of Hugh spottings back in the day, there has to be a few stories about the one who broke Hugh’s heart. Of course, it no longer matters whether it’s true or not. You just need a few good myths and legends to rev up a reunion!

Since I missed the coffee share the week before, I still need to wish our son a Happy 13th Birthday. My Dad couldn’t resist writing: “now you’re terrible teenager” in his card and I sure am hoping this isn’t prophetic. I don’t know if you really want a boring kid, but one who did what they were supposed to do without constant reminding would be good.

I guess that’s where that remote control I mentioned earlier would really come in handy. The thing is it would need to be modified to include some kind of homework/study button, which included some kind of “motivational encouragement”.  Of course, this would need to be enabled to override the “play” button. Not that I fancy myself as some kind of dictator, but it would be so much easier to operate the teenager from the couch without having to get up…AND without having to repeat myself!

Anyway, the teenager went very well at sailing over the weekend and is trying to catch up on school work after being sick.

Meanwhile, I’m back off to dancing tonight. I’m not sure how many classes we have left this term   and I love it so much, that I miss it in between. Our adult class is so much fun and caters for beginners through to professional dancers and we each just do our best…AND we have such a laugh.

BTW, I almost forgot to mention my weekly go at writing flash fiction over at Friday Fictioneers…Local Outrage.

So, how’s your week been? I hope it’s gone well. I know I don’t exactly offer you something to eat or drink but that can do on behind the scenes and doesn’t always need to be spelt out.

Anyway, I hope you have a great week wherever you are!

This has been another Weekend Coffee Share. I encourage you to come over and join us.

Best wishes and I hope you have a great week ahead!