It’s Winter here in Sydney and warm Pumpkin Soup is almost as Australian as Vegemite, Pavlova and Hugh Jackman. According to Australian Masterchef host, Matt Preston, Pumpkin is the most common type of soup Googled online. Preston has also found that our love affair with Pumpkin Soup, is uniquely Australian:

“As a nation we are rather unique in our love of pumpkin soup. The French cook it but it doesn’t feature as prominently in their kitchens as a bouillabaisse or a bisque. Americans do it too, but the soup is a poor cousin to the far more popular pumpkin pie. And the Korean hobakjuk is as much pumpkin porridge as soup.”

Before we proceed to the recipe, I have found it necessary to clarify what I’m actually calling “pumpkin”. Apparently, pumpkin by any other name does taste the same, but I’ve also found out that what is referred to as “pumpkin” in different parts of the world, isn’t what we Australians know as “pumpkin”.

Indeed, the butternut pumpkin I’ve used, is known as “squash” or “butternut squash” in other parts of the world.

However, to be sure to be sure to be sure, if whatever you call it comes in a tin, forget it. It’s not going to kill you to make this from scratch and some supermarkets do sell pumpkin pre-peeled and sliced so you can cheat without spoiling the soup.

This recipe is based on on a recipe by Margaret Fulton, who helped launch my cooking journey as a child. In 1968, she launched her first cookbook: Margaret Fulton’s Cookbook,  and it revolutionized Australian cooking. Along with the Australian Women’s Weekly Cookbook, these were cooking Bibles in Australian homes and still are in many today. 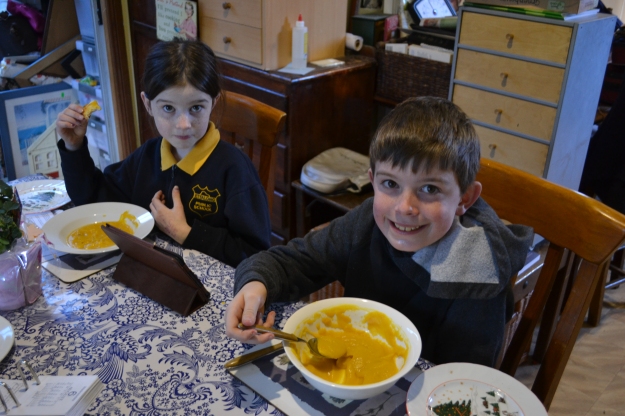 Our whole family loves this Pumpkin Soup and it literally evaporated off the plates . Indeed, it’s spoon licking good!

Thanks to the butternut pumpkin/squash, this soup has a deliciously sweet flavour and creamy smooth texture. Yum!

A sprinkling of salt.

The dogs are my ever-faithful companions whenever I cook. Sometimes, however, they can get caught in the cross-flour.

Pumpkin Soup is usually served with a dollop of sour cream and a sprinkling of chopped chives. I usually chop the chives with a pair of scissors over the top of the soup.

Bread is a natural accompaniment to Pumpkin Soup. It is often served with a crusty bread roll and butter. However, yesterday I diced up a day old baguette, and fried the pieces in a mix of melted butter and olive oil in the frying pan. These were scrumptiously delicious, even if they were a little naughty. Watch the bread closely as it can burn easily.

A word of encouragement. In my experience, it is hard to get this wrong.

That is, as long as you don’t heed the cardinal rule of cooking. Never turn your back on a hot stove.

This week, I’m offering you something a little different…pumpkin soup. Perhaps, this might’ve been healthy once upon a time. However, I’ve ramped it up tonight  with a dollop of sour cream, and a sprinkling of home-made croutons. I don’t know what it is about this recipe. However, it’s the best pumpkin soup I’ve ever had. I always make it using butternut pumpkin, but it seems to have a special something. Could it be love?

Hope you like the photo I snuck in of the kids eating their Pumpkin Soup! It’s only a few years out of date, but they looked so cute!

Now, that you’d been fed, let  me ask you how your week was?

One of these days, I’ll have to add a rating scale.

Today, is my Mum’s birthday and my Dad’s birthday is later in the week. Usually, we’d go down to their place in Sydney, but we’re so busy. Our daughter has dancing on Saturday mornings and our son has rehearsals for the Scout Gang Show. I’m hoping we might be able to get together yet.

The past few weeks have been fairly stressful. I don’t know if  is the sort of stress you experience when you’re stretching and growing. After all, growth is by nature uncomfortable. So much is going well, and yet my awareness of all these things I’m struggling to change, has also increased. So, while I’m now tap-dancing and doing yoga, I’m still wading through stuff trying to clear up the house. I won’t use that dreaded word “declutter”, because I don’t believe in it. Indeed, after spending hours working on my daughter’s room, I arrived home with a crate of books from the op shop. These weren’t any ordinary books either. They included a four volume set of Home Mechanics Books from around 1910. They were more about repairing things around the home  such as your Grandfather clock and were absolutely fascinating. However, I am trying to follow what I’ll call a “trading policy”. That for everything that comes in, something has to go out. It works well for me in theory. However, like so many things, not so well in practice.

This weekend, the whole issue of my teenage son’s school assignments reared its ugly head again. He’s been unwell on and off and the night before his assignment was due, our wifi went down. I don’t need to tell you that was a catastrophe of epic proportions. Anyway, not unsurprisingly, yours truly found herself researching Australian artist, Jeffery Smart, and his painting: “Parking Lot Near  Bologna”. Not to do his assignment for him, but to be able to help.

To be perfectly honest, this painting did nothing for me. Yet, I had to find something. Understand, at the very least, why it was considered worthy of an assignment. I personally prefer more of an expressionistic style with thick, lashings of paint, whereas this almost has a flat, photo finish. No, not my style, but I could see why the trucks might appeal to my son. That said, he’d probably prefer a Ferrari!

The last part of the assignment involved writing a 100 word story about the painting. It finally clicked that this was just like the flash fiction challenges I do. So, we talked through various plot ideas and possible names for the two men (Luigi for the Italian and Sergei for the Croatian) and then moved onto people smuggling. I wanted to teach him the thinking that goes into writing something like this, particularly the structure involved. Having that twist or punchline at the end. So, I wrote an example for him.  Here’s the link. It was very difficult to write, being set in Italy. However, as usual, Google came to the rescue.

In  between the assignment and playing Scrabble with the lad, I also read read a fantastic novel, Selling the Dream by Hugh McKay. Hugh Mackay is a social researcher and the author of 17 books, mainly in the field of social analysis. Selling the Dream is his seventh novel. I am in the throws of writing a review. However, if you enjoyed reading Graeme Simsion’s: The Rosie Project, you’ll love it. It’s hilarious and despite being classed as satire, it’s incredibly real. Sorry, I forgot to tell you that it’s set in a Sydney advertising agency and has a serious swipe at the industry and it’s “heroes”.

I really loved reading this book and am really going to try to read books more often.

However, I’m sure you know how it in. Before you know it, the day just disappears.

As has the weekend. So, I’d better get this posted quickly.

This has been another contribution to the Weekend Coffee Share.