Have you ever found that this blogging business is much more difficult than you’d ever imagined?

That when you just want to write a seemingly simple post, for some unknown reason, the words, the thoughts, the structure simply won’t come together?

I’m not talking about writer’s block. It’s not about staring at a blank page or an empty screen. There are words. There are ideas. You’re just not “in the flow”. All those thoughts, words and ideas won’t link up. They’re like random Lego bricks refusing to snap together.

That’s where I’m at.

I just wanted to post a simple postcard from the Workshops Railway Museum in Ipswich and yet it’s not coming together. I’ve been working on this post for a couple of days now and what I thought should have been a pretty basic exercise, has become an epic struggle.

It doesn’t make a lot of sense. Our family has been going to the train museum since 2007 and I thought I knew it pretty well. Moreover, I’m not trying to write anything that fancy…only a simple postcard. It should be Simple Simon… “Having a wonderful time. Wish you were here” and upload a couple of photos.  Yes, I know a blog post has to be a bit better than that but it’s not rocket science.

My problems all began with trying to write about the big, black steam engine out the front. As much as I love it, I couldn’t tell you what type of train it was or anything about its history. I don’t know what it was, how many wheels it has or whether they are big wheels or little wheels and what gauge of track it requires. It is simply the big, black engine. I can just vouch for the colour but if you were to tell me that it is green instead of black, I wouldn’t argue the point. I just remember photographing the kids on it and Geoff discussing its technical specifications (not that I can actually remember any of the details). I love the romance of steam trains and all the history but I am not technical!! I am really not technical.

Slowly but surely, the cause of my writing difficulties was coming to light. I was trying to write in my husband’s voice, instead of my own. You see, he is the train enthusiast, along with our son…not me. I don’t actually know much, if anything, about trains. I was trying to give a technical tour of the museum when clearly I’m not a technical person. I was trying to crawl inside my husband’s shoes, or more pertinently his head and it’s no wonder I couldn’t string everything together. There were too many gaps to fill in. I like trains and I love the train museum but I’m there taking photos and that is my love. I’m not into all that nitty gritty train stuff just like I have no idea what’s under the hood of my car.

So I’m going to give you my very own unique tour of the train museum and that involves a bit of a history of our visits to the museum, which all started off with a bit of a bang when our then 3 year old son threw the tantrum to end all tantrums and almost busted his boiler and mine along with it when we had to leave. 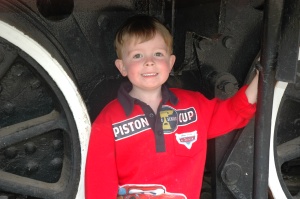 This is not an uncommon event at the train museum. You could just imagine what that place is to a little kid. They’re in heaven and their mean and nasty Mum or Dad is dragging them away…you’d be complaining too. Fortunately, the museum’s staff are very obliging and will turn things off to help you get out the door. 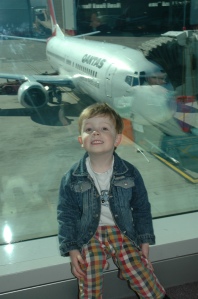 At Sydney Airport before Take Off

We were in Ipswich to attend an official service to celebrate my grandfather’s 70th year of ordination. At 92 years of age, my grandfather was the second longest-serving minister in the Lutheran Church in Australia.  My father and I had a bit of time to fill in and decided to take Mister to the train museum. We were just planning to check it out and come back the next day if it was any good.

Well, Mister was happy beyond his wildest dreams and thought he had died and gone to train heaven!!! You could just imagine his delight when he was surrounded by huge big steam trains. His eyes were almost bursting out of their sockets and I can just imagine how he felt when all those magnificent steam trains suddenly came to life. He was beyond excitement. Moreover, there wasn’t just steam trains. There was also a huge model train track which totally dwarfed his little wooden train set back home. He was fixated watching the model trains and pressing all the buttons. For a little 3 year old boy who adored trains, this place was just superlative. He was happy beyond his wildest, wildest dreams!!

Then, it was time to go.

Now, I’m sure you can see it coming… the tantrum. Not just any tantrum either. Mister blew a boiler!

My Dad ended up carrying him out of the museum and he was still kicking, screaming and fighting with all his might to go back in when we finally managed to get him into the car. Even then, he absolutely refused to get into his car seat and he certainly gave fresh meaning to the power of persistence…

Nothing in the world can take the place of Persistence. Talent will not; nothing is more common than unsuccessful men with talent. Genius will not; unrewarded genius is almost a proverb. Education will not; the world is full of educated derelicts. Persistence and determination alone are omnipotent. The slogan ‘Press On’ has solved and always will solve the problems of the human race.

You know how these events work. The entire day is planned out with clockwork precision and meltdowns by toddlers aren’t factored into the schedule.

We were in big trouble.

Well, we managed to get there on time in the end but it was a lot of stress.

Looking at cards the next day with Papa Bert

I laugh when I look back on it all now. You know how it is. The worst moments often make the best stories down the track.

We have all loved the train museum so much that we’ve had annual membership passes even though we live inter-state over 1000 kilometres away. We just make sure we stay for the best part of a day to keep everybody happy. There is so much to see and do!!

This still isn’t the postcard I’d intended to send from the train museum. That’s still to come. Perhaps, we’ll call this one the ghost of steam engines past. 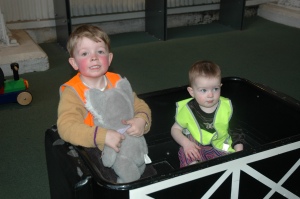 Both children at the train museum.

I finally finished this post last night and then went hunting for the photos. They turned out to be quite an insight. You can’t just trust everything to memory. Our daughter was also in the photos.  Somehow, she had been omitted from the story. I had assumed that we had left her back at the house with my Mum but there she was in all the photos. Photos I had mentally attributed to a later visit. I also found photos of the technical details. Perhaps, they were for Geoff. He couldn’t get time off work for that visit and we had flown up with Mum. There is also a remote possibility that I was trying to educate myself on the technical aspects of trains, although that has to be pretty doubtful. Who knows? Memory is obviously an unreliable witness. 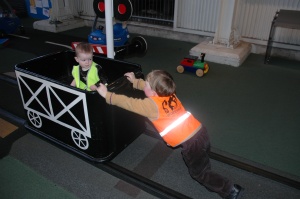 Taking care of his little sister.