Perched on top of the ridge, the dingo pack was salivating.

“All systems go.” The dingos howled. Right on cue, the humans were zipped inside the tent.

In a flash, the lamb chops were gone.

“Dingos??!!!!” Sally screamed.” When I agreed to go camping, you said NOTHING about dingoes! How are we going to see that “magical night sky” now?”

“OMG, the dingoes got our lamb chops.“

“And my Nikon camera!…HOTEL NOW!”

This has been another contribution to Friday Fictioneers hosted by Rochelle Wishoff-Fields. PHOTO PROMPT© Jan Wayne Fields.

It’s very late here and I plan to come back and polish this tomorrow. Although the tent in the photo prompt this week is quite modern, I was reminded of the tragic case of baby Azaria Chamberlain who was taken from her family’s tent in 1980 while they were camping at Ayer’s Rock or Uluru. This was one of the most debated and controversial court cases in Australian history.

Azaria Chamberlain (11 June 1980 – 17 August 1980) was an Australian 2-month-old baby girl who was killed by a dingo on the night of 17 August 1980 on a family camping trip to Uluru (also known as Ayers Rock) in the Northern Territory. Her body was never found. Her parents, Lindy and Michael Chamberlain, reported that she had been taken from their tent by a dingo. Lindy Chamberlain was, however, tried for murder and spent more than three years in prison. She was released when a piece of Azaria’s clothing was found near a dingo lair, and new inquests were opened. In 2012, some 32 years after Azaria’s death, the Chamberlains’ version of events was officially supported by a coroner.Wikipaedia

I was 11 when Azaria Chamberlain was taken. Everyone not only talked about the case, but debated and had a stance and Lindy Chamberlain was vilified. I also remember jokes going round school at the time. Racist jokes were equally popular back then so there wasn’t alot of consideration on many, many fronts.

Dingoes, which had seemingly passed under the radar, were also vivified and would’ve starred in “Australia’s Most Wanted”.

The difficulty is that humans and dingoes in Australia have been co-existing for thousands of years and dingoes are Australian natives.

Here’s a bit more about the dingoes:

“Dingoes know that humans are an easy way to get food, and you will often see a dingo watching fishermen, and waiting for free fish. Dingoes also occasionally tour through campsites and sit of the periphery of a camp, watching and waiting for an opportunity to be given some free food or to find some left over scraps. In most cases dingoes simply sit back beyond the light of the camp and watch. If a dingo chooses to sit near you feel very honoured and enjoy its company but do not try to approach the animal, and don’t try to lure it with food. Dingoes do not like to be patted so please never reach out you hand to pat them, especially over their head. This is seen by dingoes as predatorial behaviour and very threatening.

Dingoes are shameless thieves, and will take any opportunity to steal whatever they can from you. This is not because the item has your scent on it and they see it as a food item, it is because they love to play with whatever new and novel item they can find. Do not leave your thongs outside your tent, or leave anything out of your vehicle that you can’t afford to have stolen. This obviously includes food, but also includes sleeping mattresses, which they love to tear up into small pieces, and anything else you own including expensive camera equipment!”

Hope you’ve enjoyed something of a trip to Australia this week.

What nobody tells you when you sign up for this crazy parenting caper is that this whole business of  teaching and educating your kids is a two-way street. That they stretch, extend and educate you at least as much and you can’t just sit back and rest on your laurels. Oh no! Instead you have to work hard, stretch until you feel like each and every fibre in your mind, body and spirit are about to snap and you’ll be put back together with sticky tape. At least, if my daughter is patching me up, that’s what she’ll be using. 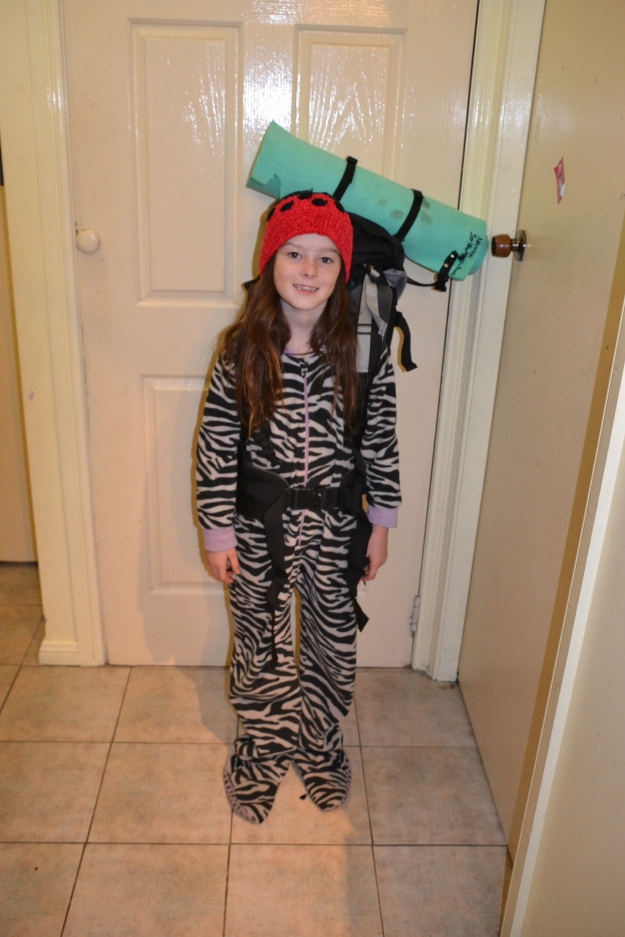 Miss trying out her pack in her zebra onesie the night before camp.

So it was last Friday night, that I found myself driving up and down a street after dark looking for my friend’s house so I could drop Miss off for a 2 day cub scout camp. This wasn’t the sort of so-called camping where you’re living it up in a hut. Rather, they would be sleeping in tents and roughing it in the inimitable Australian bush.

Strangely I wasn’t worried about the snakes, spiders and drop bears which threaten death and panic throughout the Australian bush. Instead, I was much more concerned about the possibility of rain. I really didn’t like the idea of my little darling sleeping outside in the rain in a flimsy tent. After all, I don’t even like the dogs sleeping outside in their kennels in the rain, despite their thick, woolly coats. Just call me soft but I usually leave them inside.

Yet, I digress.Back to dropping Miss off. 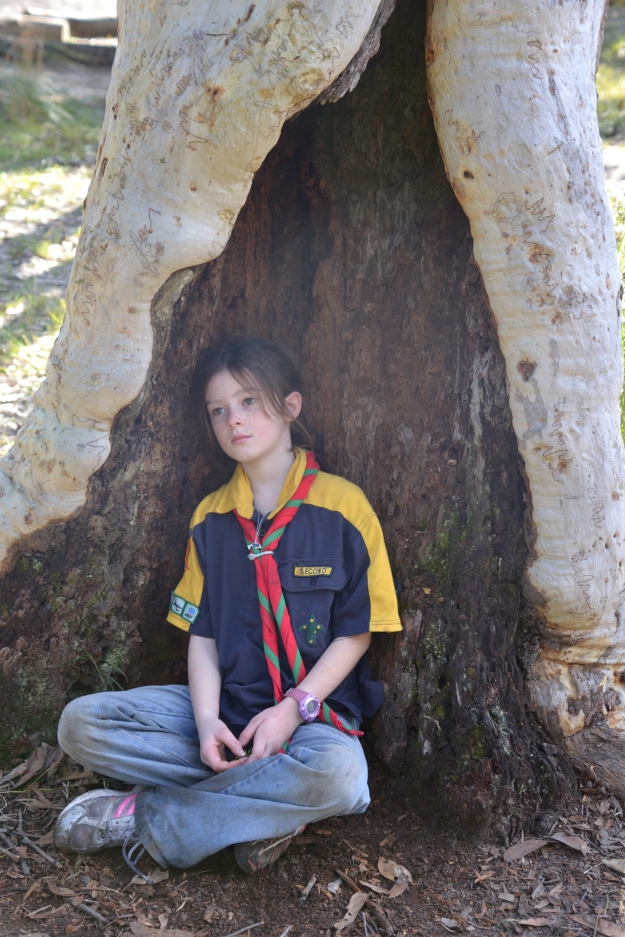 Looking a bit tired but putting up with posing for photos inside the trunk of a scribbly gum.

It’s pitch black outside and I’m driving up and down this road trying, against all hope, to find any street numbers. I’ve been to their place once in daylight but I was a passenger, which usually doesn’t make for good recall. After a few U-turns and zero recognition,  decided to admit defeat and call for directions. There’s no shame in that. Besides, my friends are pretty understanding when it comes to my foibles and have the same fondness for me that they usually reserve for garden gnomes. 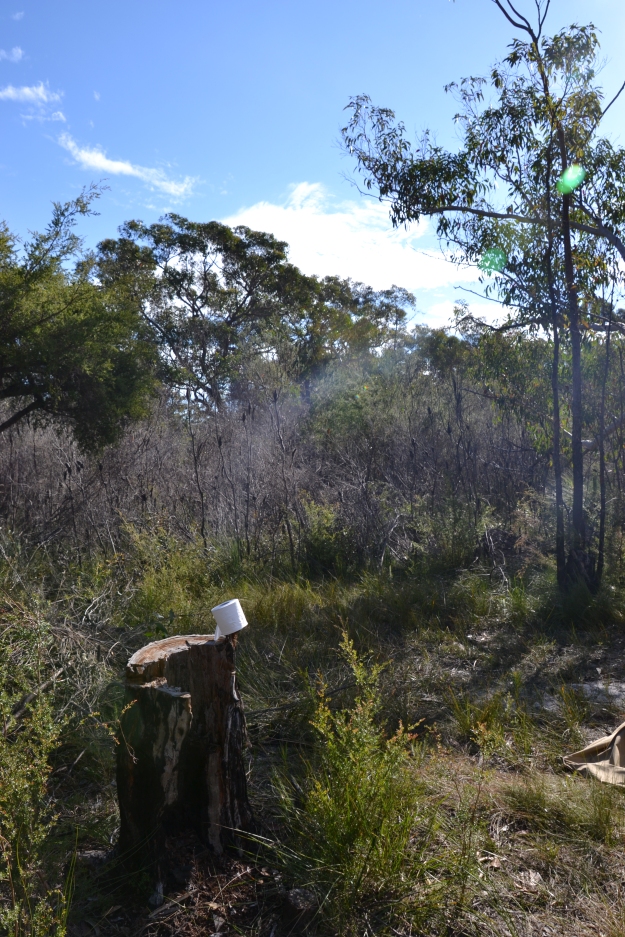 Of course, by the time I pulled over and actually called for help, I was starting to stress. Not quite a full-blown panic attack but I was definitely working on one. Although I’m often Captqain Courageous, I have some trouble with night blindness and, of course, as I start to stress my disorientation only got worse and the world started to spin and do some kind of incredible dance.

I don’t use my mobile a lot and being cold and stressed and, of course in the dark, my fingers had seized up and I wasn’t pressing the buttons properly. Moreover,  apparently my ear somehow managed to disconnect my phone all by itself. At least, that’s what my daughter said but what would she know? She doesn’t even have a phone or access to one and yet she does seem to know her way around my phone with the expertise of an Aboriginal bush tracker.

Yes, it appears that I have very wiggly earlobes!!

Anyway, when we pulled over, I forgot to turn my lights back on and I was only driving literally around the corner but there my friend was now playing sentry outside his place looking for me and then I turn up totally lost in our suburban back streets unable to operate my mobile phone with my head lights off. Talk about a Wally! All I can say, is thank goodness I wasn’t made in a factory. I would have been stamped defective and turned into landfill. 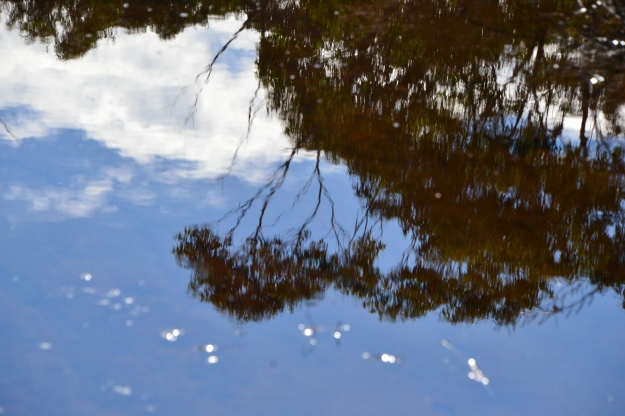 Reflections on the creek.

All I’ll say is thank goodness I can make yummy choc chip cookies. These have made me very popular with the scouts and their parents. Given their popularity, I’ll never have to worry about navigation again. They’ll all be looking for me!

Anyway, after my incredible success on Friday night, I dobbed Geoff in to pick Miss up on Sunday afternoon but we all went up to meet her and caught the end of closing parade.

Much to my delight, I managed to go on a mini bush walk as we picked up her gear and checked out the camp site. I really enjoyed that walk because bushwalking with my medical condition when I have fallen over and even broken my foot on plain grass, means I just don’t go. I don’t think I’ve bushwalked for at least 2-3 years. I’ve been skiing but bushwalking can present a lot more immediate hazards.

When you’re an outdoorsy scouting family, that’s quite a gap.

By the way I mention that not to whinge but to raise awareness and to remind people not to take walking for granted. It could all change in the blink of an eye!! 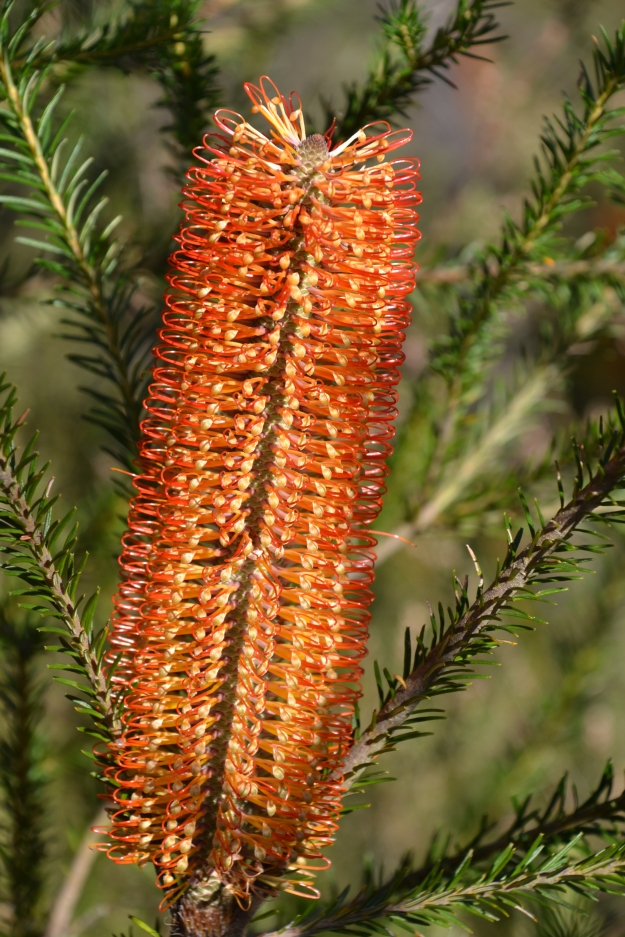 Heath-leaved Banksia, Banksia Ericifolia , Kariong,, New South Wales. Miss told me they collected the honey off the dew left on the flowers early on those frosty mornings.

We always need to carpe diem Seize the Day!!

As you can see, while my feet don’t always cooperate, my click-happy finger went into overdrive taking dozens of photos of these precious camping moments in the Australian bush.

Just like what happens in Vegas stays in Vegas, what happens at camp, stays at camp so I’ve only had a very sketchy description of what happened. Needless to say, there was possibly more talking than walking, not a lot of sleep but a lot of fun. As usual, I take my hat off to their dedicated leaders who volunteer their time so that our kids can grow. 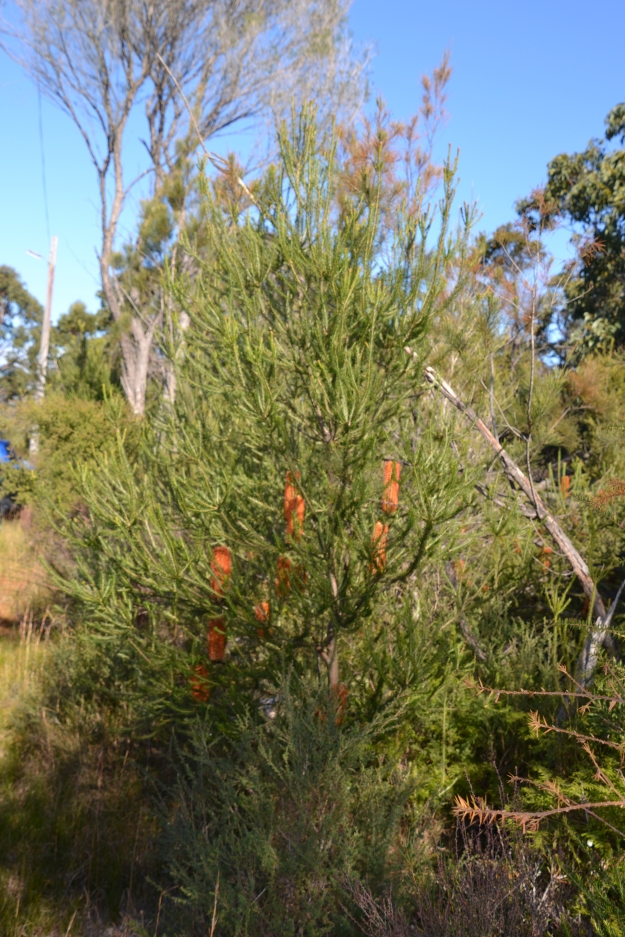 This Banksia bush reminded me of a straggly Christmas Tree. what with its stunning golden “candles” and its somewhat triangular shape.

Meanwhile, I am still thinking about how I can get myself up to scouting speed. Rather than driving too much at night, I might just tie myself up in knots instead. 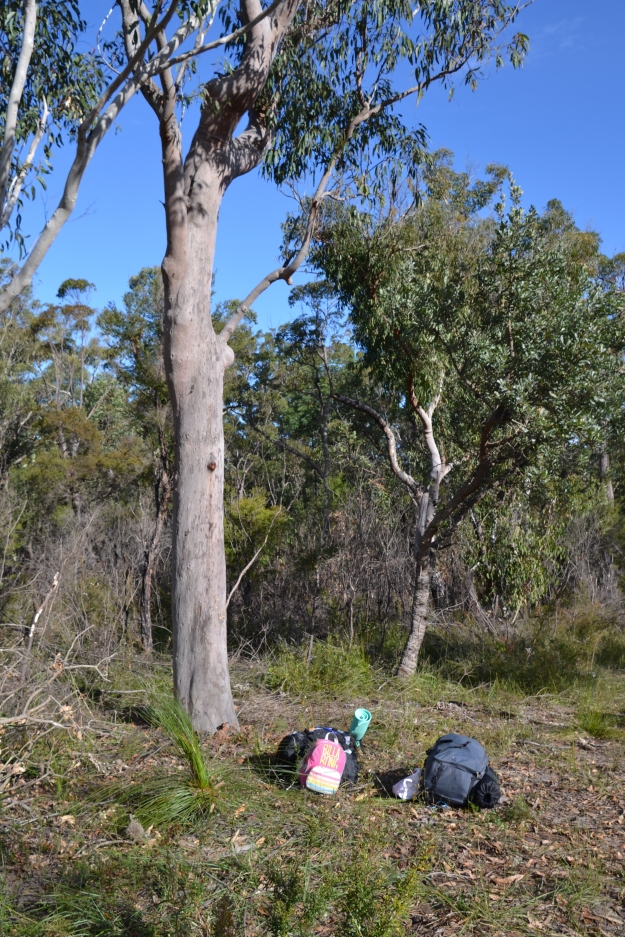 Bags in the bush.

Has your family been involved with Scouting or Guides at all? Any stories you’re willing to share now that you’re too old to get busted? Much to my disappointment, I wasn’t involved and the closest I came was going camping, was at school when I was about 15. There was quite a fuss at the time because many of the girls freaked out about having to dig a hole to go to the toilet. We were a tough bunch which also had to be reminded not to wear high heels. Golly, now there’ s a scene for a movie!

PS I should point out that while it looks like this camp was held at some remote location deep in the Australian bush, Camp Kariong is only 20 minutes up the road and is in Greater Sydney.