Last night, my daughter flagged my attention wanting to show me something on U-Tube well after bedtime. I was in the middle of something or other requiring all my concentration. Of course, I promised to check it out today but somehow closed the tab, lost the link,  and I won’t mention anything else I might’ve got stuck into today, instead of being an attentive Mum. Well, that is other than spending most of the day asleep due to a weird sleep virus we’ve been fighting off.

Anyway, as Calvin Coolidge famously said: “Nothing in this world can take the place of persistence”, and if there’s any being on this planet who knows the power of persistence, it’s kids….”Muhum!!!” Failing success on that front, she frequently resorts to Plan B…my mother!

So, of course, when she asked me if I’d checked out the hilarious plastic bag clip tonight, I cringed and slunk into my chair  and gracefully resigned myself to the inevitable. Thre was no escape, no more excuses or wriggling out of it this time. Facebook, blog, research, emails were all put on hold as I watched, laughed and absorbed its subliminal, environmental messages and decided you’d love to watch it too.

With it’s mock David Attenborough-esque format, this documentary follows the life cycle of the plastic bag from the supermarket carpark into the Great Pacific Garbage Patch, where it finally “dies”. Yet, although this mockumentary is very funny, it uses humour to share a disturbing environmental message about how plastic bags are impacting on our animals, waterways and oceans in a format which is hopefully spreading faster than the common cold through the World Wide Web.

Indeed, that’s why I had to share it with you.

Welcome to Day 16 of the Blogging A-Z April Challenge.

As you may be aware, we are Travelling Alphabetically Around Tasmania at Beyond the Flow this year. This morning, we left Port Arthur ridiculously early for the 5 hour (340 km) drive to Queenstown, on the West Coast. We will be going on a very quick detour to check out Russell Falls, which is a quick 10 minutes walk from the Mt Field Visitors’ Centre. So, if you’re wanting to get onboard the West Coast Wilderness Railway at Queenstown, we’ll have to hurry up. After all, we’re only here for one day.

The route we are taking today retraces my journey from Port Arthur to Devonport via Queenstown on my first trip to Tasmania in 1995…a trip I have always considered a big mistake. Back in the days long before I’d met Geoff my favourite Tasmanian, I’d flown down to Tassie to see the end of the Sydney to Hobart Yacht Race. I was staying in the youth hostel in Hobart, when I hooked up with another backpacker and we hired a car to get around. When I tell you that we headed straight for Queenstown on the West Coast after leaving Port Arthur, you’ll know I hadn’t done my research because we completely missed the beauties of Freycinet National Park, including Wine Glass Bay. 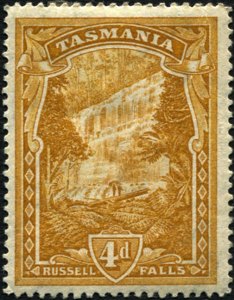 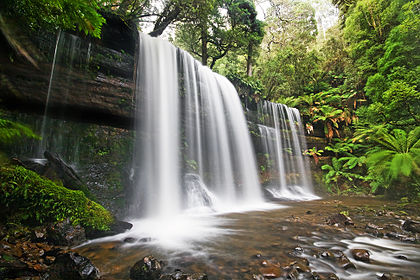 Instead, we experienced Russell Falls, which were amazing from memory (I more remember photographing the falls, which won’t surprise you). From there, we kept travelling west and needed somewhere to stay. That’s how we ended up in Queenstown. It was a large dot on the map and off we went. For those of you who are uninitiated into travelling around Tasmania, you won’t appreciate the implications of this. Back then, Queenstown was nothing but a decimated moonscape after years of Copper mining:

“The copper smelters wreaked havoc on the surrounding landscape. Not only did the sulphur fumes kill off plants in the area but the eleven furnaces required vast quantities of timber and the mining company simply cut down the forests to fuel the fires. It has been estimated that hundreds of men were employed as timber cutters and that over 3 million tonnes of timber were cut down between 1896 and 1923. At its peak the furnaces were consuming 2,040 tonnes of wood each week. The combination of timber felling, the sulphur fumes and the heavy rainfall in the area (which washed away the top soil) ensured that by 1900 the whole valley looked like a desert.[1]”

I also came across this piece about Queenstown written by Alan Banks, age 13 and particularly loved his description of the Galena crystals (Geoff has since told me his sister had such a lump):

“QUEENSTOWN, Tasmania, has a recorded population of 2800, but this has shrunk a great deal, for there were many people prospecting for gold some years ago. Nearby is Mount Lyall, the source of much copper. Many metals are mined here, including gold, silver and lead. Silver-lead ore, the galena crystal for wireless sets, for which one pays so much in the Sydney shops, was often dug up in lumps the size of a football in back yards and gardens. Sulphur is also extensively found here, and whenever the north-east wind blows Queens-town smells horribly, (Mt. Lyell is to the north-east of the town.) Bush fires in summer frequently occur; they presented a magnificent sight to us at night time, for our house was just opposite the mountain and we had splendid views of the broad sheet of flame rolling down the steep mountain side. The crackling of the fires could be heard in the town. Not far away are the pleasant sea side resorts of Zeehan and Strahan. Zeehan, where boating and swimming facilities are ideal, is famous, even in Tasmania, for fishing. Tourist trips on the Gordon River are very popular. Parties arc taken up the river in launches, and spend several days in camp on the edge of the impenetrable jungle. The rain fall is extremely high here, which, with the fertility of the soil, accounts for the heavy growth of trees and vegetation. The average annual rain fall is 100 inches.”

While I’m pleased I made the trip in hindsight, I was a bit pissed off with myself once I’s seen photos of Wineglass Bay and saw what I’d missed. I’d only had about a week in Tassie at the time, so every day was precious and on your first visit, you want to do the best, rather than the more “educational” stuff.

Since that first trip, I’ve been back to Tassie about five times with Geoff and we really do tend to stick around the North and North-East with fleeting trips down south to Hobart and more recently Port Arthur. This means I’ve never been back to Queenstown and we’ve only made it down as far as Strahan on a previous trip. This has not been due to last of interest, but lack of time. There really is so much to see in Tassie and we tend to explore in detail, rather than spreading ourselves thin. However, we are planning to explore the West Coast on our next trip and take the West Coast Wilderness Railway.

That means we’d better start saving our pennies. We can’t get enough of Tasmania.