Last night, as I kissed our daughter goodnight, she said: “This is my last night of being eight.” She was overjoyed!! She’s one of the youngest in her year at school and it’s no secret she gets a bit cheesed off that it takes eternity for her birthday to come round each year. There’s only a couple of months and the frustrating tail-chasing game starts all over again. Like all kids, she wants to grow up too quick. Our “little Miss” is 9 going on about 15 especially when she struts around the house in her fancy silver high heels, which almost fit her now. It wasn’t that long ago that I’d bought them from the charity shop for dress ups!!

That said, she is still a little girl and boys are still “yuck”…thank goodness!!

I‘m not sure how long that’s going to last with her brother who turns 11 in less than a fortnight and heads off to High School next year. I have no illusions about what all of that means. However, I feel much better prepared for the teenage years than I was for early childhood. At least, I can remember what it was like to be a teenager and I’m sure it was only yesterday.

Family Photo Back at Home 9 long years ago.

As we celebrate another round of birthdays and I’m forced to think about the passage of time yet again, I am reminded of time’s  cruel tricks. Since all other theories and explanations have failed, I’ve concluded there’s some kind of horrid, malevolent watch matcher lurking somewhere way up in the sky who keeps tinkering with the cogs and speeding things up. Don’t you agree?

I mean…Surely time couldn’t move that fast unless it was taking performance enhancing drugs and even then we’re talking about lethally high doses.

Someone or indeed, something, is doing an awful lot of tinkering with the gears up there. That’s the only way I can explain how time goes really fast when you want it to go slow and conversely barely seems to move at all, when you really want it to speed up like while you’re waiting in a supermarket queue and the person in front of you with enough food to feed an entire army can’t remember their pin and you’re running late and your child is standing on a street corner after dark in their ballet leotard and it’s cold and you don’t know what sort of creeps are hanging around.

h Ever the philosopher, me at around 6 months.

Once upon a birthday, my grandparents used to sing me “Happy Birthday” on the phone and my grandmother would tell me year after year, about when they “got the phone call” and my father told them they had a grand-daughter and they’d put her in a warmer. She always left out all the details such as how I was facing sunny side up and things had been touch and go. That THAT phone call wasn’t just about “it’s a girl”. It was a serious answer to prayer and their daughter and grand-daughter had made it through a rather perilous journey called birth.

You forget that your baby is hopefully crying the first time you see them.

There were no life or death dramas when our daughter was born, aside from when Big Brother, the inimitable “Little Man”, decided to climb up on the hospital bed to have a cuddle with Mum and activated the  emergency switch. That immediately and brutally flung the head of the bed straight down and in the process, the drip stand fell down and bumped Miss on the head. Miss ended up with a bruise on her forehead and was sent off to the Special Care Nursery for observation. A storm in a teacup but we still stir Mister about that. It’s not his only tale. The antics of “Little Man” are legendary but largely just involve a healthy curiosity combined with high speed.

Getting back to our daughter’s arrival…

Roberta Flack (a romantic song but so apt)

The other thing, I remember, of course, is the very first moment I saw her.  She was much smaller than I’d expected and only weighed 2.93 kg and was an average length of 49cm. She was exceptionally petite and I guess given that I’m quite tall myself (174cm or 5 ft 10″), I was a little surprised. She was so tiny that we needed to get her baby-pink, miniscule 0000 Bond Suits outfits from the Special Care Nursery where they were kept nice and warm for the premmie babies. My Mum was sent to buy some micro-clothes for when we went home.

Our Gorgeous Little Rainbow Fairy Almost Aged 5 and About to Start School.

I know I’ve mentioned time before but tell me, where does time go? I know lines like that are cliched and a road too well-traveled for a seasoned writer and yet, this great mystery still hasn’t been explained. Not all time travels at the same rate and where my daughter’s concerned, time has fast-forwarded faster than the speed of light!! 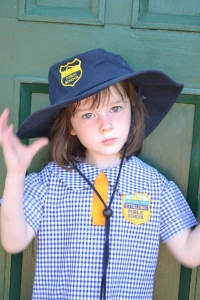 Miss on her first day of school.

After all, I could have sworn she wasn’t born that long ago and she’s only just started school. Yet, somehow she’s migrated from infants into primary and is now well, perhaps not towering over all of the new kindergarten kids but has certainly moved on. I feel like I’ve been hit by a flying brick and I’m lost, almost in a trance or in a dream, while everything flies past me.

I hope she’s had a Happy Birthday. She opened her presents before school and as it turned out, the local radio station was at school this morning and they wished her Happy Birthday on air…much cooler than on Mummy’s blog!!

She took the most amateur-looking Cake Pops to school for her class. I can’t believe I let her talk me into making those because, as my mother advised me, you never make something new for a special occasion and when I’ve broken that Golden Rule, I’ve regretted it. As we all know, regret with family birthday cakes is usually accompanied by nerve crushing angst, tears and if you’re really wound up…hurling the cake across the room.

That is, if the dog hasn’t eaten the cake first. I have very bad memories of a food-thieving, greedy Old English Sheepdog called Rufus being caught in the act. That dog used to steal food and swallow it plastic bag and all. Eventually, we’d find the evidence deposited on the back lawn!!

I don’t know how that dog survived for so long! 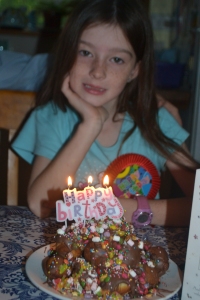 Instead of having a special birthday dinner tonight, the kids were off to Cubs and Scouts. As we still haven’t sorted out the details of either of the kids’ birthday parties yet, this was opportune as a few of their friends were there. That meant making a batch of chocolate cupcakes and huge boxes of chips for tonight’s celebration. Miss told the lady at the checkout that: “Scouts love junk food and we purchased supplies. What a great ambassador!

There’s a world of quotes which I could pass onto my daughter but here are a couple from AA Milne’s: Winnie The Pooh.

“Promise me you’ll always remember: You’re braver than you believe, and stronger than you seem, and smarter than you think.”
― A.A. Milne
“You can’t stay in your corner of the Forest waiting for others to come to you. You have to go to them sometimes.”
― A.A. Milne, Winnie-the-Pooh

“We are not nouns, we are verbs. I am not a thing – an actor, a writer – I am a person who does things – I write, I act – and I never know what I’m going to do next. I think you can be imprisoned if you think of yourself as a noun.”
― Stephen Fry

May all of your dreams come true..,in time. I’d like you to grow up before you open that dream fashion business in Paris. Climb some trees. Make clothes for your dolls and film them with your iPad. Ride your bike. Walk the dogs and wear your hair in plaits with rainbow nails and silver high heels, which are still too big and keep baking glittery cakes and drawing precious pictures just for fun.

As much as you yearn to grow up, you can’t rewind time. It only speeds up.

You might not appreciate it it now but there’s real beauty in growing slow.

PS A week after Mister’s birthday sitting at Palm Beach, I stumbled across this song Forever Young by Rod Stewart, which I wanted to send to Miss as a post birthday present: https://www.youtube.com/watch?v=vgiLWNgpXiQ