Walking into the hospital with my suitcase packed, I had no idea this would be my greatest goodbye.

Rather, all I could think about was the birth and welcoming our tiny son into the world. After feeling him moving around like an exuberant butterfly, I’d finally see his face and hold him in my arms.

No longer a work in progress, he’d become real.

With such anticipation and a love I’d never known before, I didn’t notice the door slam shut behind me. That the woman who walked in, wasn’t the same woman walking out.

That Mummy was born.

August 31, 2016 prompt: In 99 words (no more, no less) write a story about a goodbye. It can be the last polka until next time; a farewell without end; a quick see ya later. How does the goodbye  inform the story. What is the tone, the character’s mood, the twist? Go where the prompt leads. 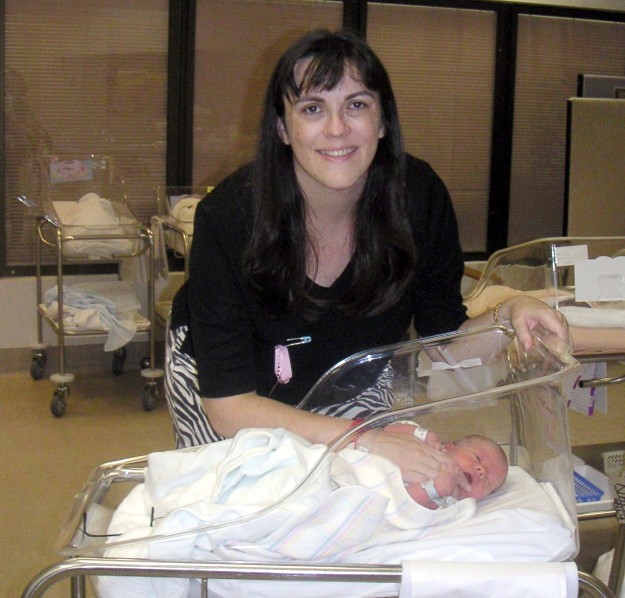 On Father’s Day, my cousin gave birth to her first born, a son, in the same hospital where I gave birth to our son 12 years ago. I had no idea at the time how  becoming a parent would change our lives in so many ways and how it would extend me in ways I never thought possibly but also take me away  from people and activities that meant so much to me…a world I never thought I’d leave behind. After all that initial excitement where I couldn’t keep my eyes off him, parenthood was also a struggle. 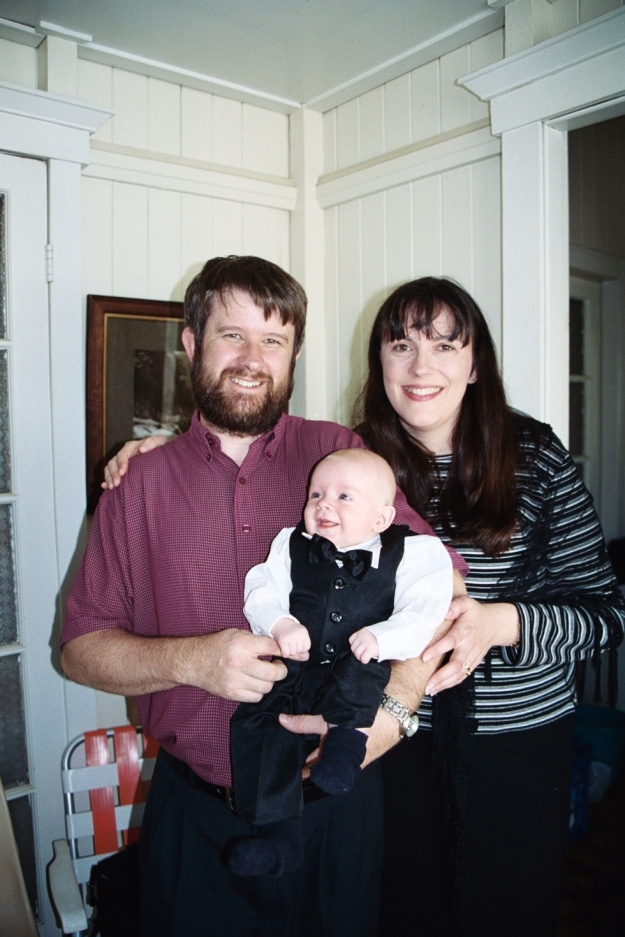 This was taken at my grandfather’s 90th Birthday Party. My grandfather was a Reverend and wore his suit a lot. So, it seemed only fitting for Mister to come formal.

As with so many things in life, there is that fusion of joy and struggle, hellos and goodbyes…the yins and yangs. I personally  feel it’s important to acknowledge both sides of the coin and not to deny their existence or how these contradictory forces interplay with each other throughout life’s journey. This is particularly true of parenthood where the positives are emphasised in glamourised commercials while the struggles can be very private.

So, often when you hear a parent open up about these struggles, there’s someone else in exactly the same boat and that relief of no longer feeling alone. 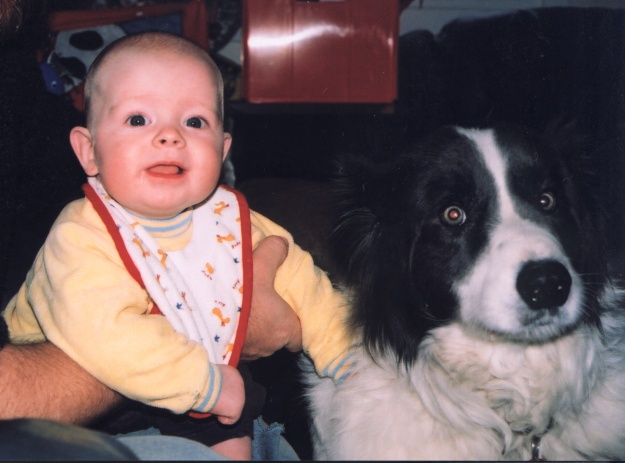 For all my dog loving friends, here he is with our first Border Collie, Zorro.  He was a fantastic dog!

Only I could turn getting the dog clipped into a philosophical debate otherwise known as a “drama”.

For the average, normal person, getting our dog clipped would be a no-brainer.

Bilbo is a woolly, Border Collie designed for the Scottish highlands but living in beachside Australia where we experience truly scorching summers. Some days, it gets so hot that you could easily roast a chook or fry an egg on your bonnet if you could actually be bothered.

When you have a long-haired dog, you want a long-haired dog… even if you do live in a stinking hot country. As weird as this might sound, I find patting the dog with his long, woolly coat very therapeutic. I just love touching his fur and giving him cuddles. He is so snuggly. I know that sounds a bit selfish letting him suffer just so I could play with his fur but I did relent. I booked him in. He had his haircut. It’s just that I found the whole process difficult.

I also wondered how the dog would feel about losing his coat. He’d never been clipped before and his fur coat doesn’t exactly have a zipper. Once it’s off, it stays off. He’s only known himself with fur.  I was pretty convinced poor Bilbo was going to feel naked, exposed and wonder where his real self had gone. He doesn’t spend a lot of time looking in the mirror but I’m sure that if he did catch a glimpse of his reflection, he would wonder who was staring back at him. Who is this new dog? I’m sure even a dog has some kind of inbuilt sense of identity and for most of us, how we look is definitely a part of who we are. I’m not talking about vanity here. I’m just talking about having a sense of what we look like that makes us unique…ourselves.

Now, of course I don’t know if dogs actually do have a sense of identity. Moreover, even though I love my dog, I have to admit he already had issues. Bilbo believes he’s a person, not a dog. He also believes he’s our third child.

So you see, the poor dog was already mixed up enough without having a hair, or should I say fur, crisis as well.

Anyway, after weeks of procrastination and hard core avoidance, Bilbo has finally had his run in with the lawn mower on Saturday and his beautiful fur coat has gone. He was naked, all except his face and the very tip of his tail. They don’t usually clip a Border Collie’s tail but his tail was quite matted and it needed a fresh start. I can accept that. It all makes perfect logical sense and it was certainly more humane (if that’s what you call looking after your dog). That said, his precious tail looks quite odd-especially as the groomer left a white tuft at the end as some kind of compensation for losing the rest. It’s all quite neat and I’m sure it will look better in a couple of weeks but at the moment, the poor dog looks like a cheerleader wagging a pom pom and it does look… um…”different”! 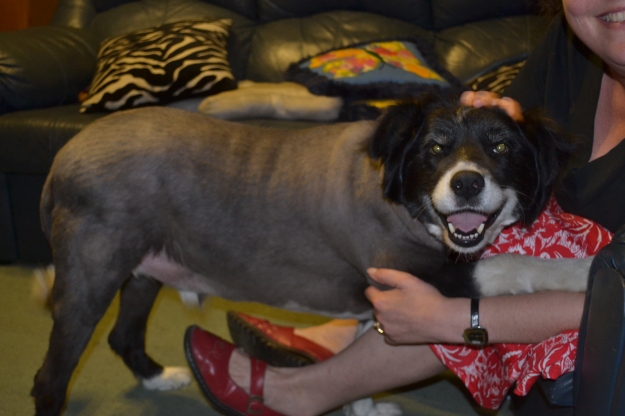 Bilbo wasn’t only missing his coat. He had also changed colour. He went into the dog wash booth black and came out light grey. I could say it was like a butterfly emerging from a chrysalis but even though the dog groomer had done a fabulous job, he’d gone in the butterfly and emerged the caterpillar. Apparently, border collies have two fur layers and the top coat with longer hairs is black and the undercoat is light grey and they actually appear grey when all the hairs are the same length.

I must stress that we were very happy with the dog groomer. Bilbo wasn’t the easiest client and kept trying to bite the clippers when they went near his front paws and tried to jump out when she turned on the hairdryer. He was a little freaked out. He’s been well-trained by the rest of the family.

The kids weren’t too sure about Bilbo’s new look, especially our daughter who can be quite “particular”.

Initially, our daughter pretty much rejected the dog. She asked me not to take him anywhere near school because her friends would tease her for having a weird dog. I guess it was good that she was open with me so we could talk about “difference” and being more accepting. I reminded her that she loved Bilbo and he was still the same dog and would also be much better off in summer without his coat. I felt this was an important lesson to help her be more accepting of people. After all, we comes in all shapes, colours and sizes….themes and variations and I’d like both my kids to accept people for who they are, not based on appearances!

I do wonder what Bilbo thinks about losing his coat and raised the subject with the family in the car:

Seeing Bilbo without all his camouflage, has renewed my commitment to his diet. He looks like he’s been squeezed into a tight lycra body suit, which is a size too small and reveals every single bump and indulgence.

He needs to lose weight and get fit and I need to join him!

There has, however, been an unexpected upside to getting the dog clipped.

He stayed out of the rain this morning.

For some strange reason, Bilbo who is usually a very smart dog, stands out in the rain getting sopping wet and then expects to be let in the house and given a pat. He looks terribly forlorn and hurt when he has to stay outside to dry off but as much as I love our dog, that wet dog smell and the mud and too much.

Well, this morning the theory was put to the test and we had an almost dry dog. His head, which pretty much has its original fur, was a bit wet as it had been sticking out of his kennel.

We are all adjusting to the new dog. Bilbo hasn’t had a nervous breakdown about losing his coat and Amelia didn’t say anything when Bilbo came in the car with us to school this morning. Patting the shorn fur doesn’t feel the same as the long fur but I’ll live. And now that we have the dog all ready for the summer heat, we’ve had another cold snap and the dog is probably cold.

Perhaps, he could have kept his coat just a little bit longer…

PS Putting this post together showing me how difficult it is to photography the dog. I was chasing him around the house and every time I’d call him to try to get him to look at the camera, he’d come over to me. In the end, Geoff took the photo of him with me. I also realised that we don’t have many photos of the dog. We usually take photos when we go out and he’s not with us. Considering how many photos I take, I will have to work on that.

PPS Of course, since having the dog clipped, the weather has been unseasonably cold. Last night, I was looking for my overcoat to head out to a Christmas party. It’s already been packed away but I fished my winter PJs back out of the storage crate. I also let Bilbo sleep inside. Geoff heard a mad scramble of claws when he got up during the night. He suspects the dog was “illegally parked” on the couch.