“A room without books is like a body without a soul.”
― Marcus Tullius Cicero

Do you remember that incredible, mind-blowing feeling when you finally found THAT BOOK when you were young which suddenly opened up the world of reading? That sense of discovering your very own Disneyland, a veritable Aladdin’s cave of treasures…all through the pages of a book! It’s something you never forget!

For me, that book was The Diary of Anne Frank, which my mother gave me for my 13th birthday. It was a very conscious move on her part as she really wanted me to share her love of reading and experience that wonder for myself. After a few misses along the way, it worked. Anne Frank the same age as me, a writer and someone I could relate to in so many ways. Moreover, her diary was also non-fiction and I’m still not really much of a novel reader.

However, reading the The Diary of Anne Franknot only sparked my love of reading, it also encouraged my love of writing and inspired me to write my own journal which I called, apparently not so originally, “Anne”.

Of course, there’s been a lot of water under the bridge since then.

Now, as a parent, I’ve found myself in my mother’s shoes, trying to engender a love of reading for our son. To take him beyond all the many books which we have read together snuggled on my lap, to the point where he’ll want to grab a book and read it for himself. That like the rest of the family, his books will also become his friends. However, this transition is not necessarily a given, even if you come from a family of avid readers and even writers. It is a path we each have to work out for ourselves. That said, as parents we can increase the odds by providing good maps, compasses, encouragement and, of course, a strong torch (It could even be the same torch you used to use to read in bed when it was supposedly “lights out”!)

Trying to find this game-changing book for our son has been a bit hit and miss and certainly hasn’t been helped by his love of the dreaded computer game, Minecraft.

Perhaps I’m getting old but I’m convinced electronic games are a much greater evil than the box ever was in our day. The TV also used to go to sleep in those days and wasn’t awake all night. I’ve lost track of the friends who’ve woken up in the middle of the night and found their kid playing Minecraft or similar. It’s there 24/7,. That is, unless you lock it up in the garage like we do during the week. Well, at least that’s the iPads.

Anyway, it now looks like he has finally found THE BOOK. For 11 year old Mister who is pretty interested in maths, this book is The Big Book of Numbers by self-confessed Maths Geek, Adam Spencer. If you haven’t heard of Adam Spencer, you can check him out here: https://adamspencer.com.au/ I can assure you that he comes highly recommended and by none less than Monty Python’s John Cleese: “If you find this book boring, you should be in a clinic.” 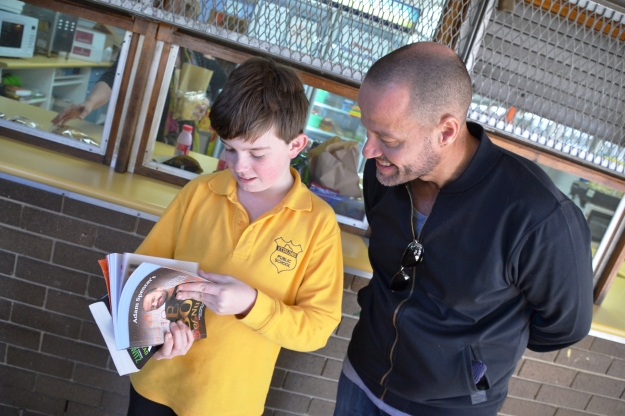 Mister asking Adam some questions from the book. Yes, he had read it…I was so proud!

Well, as it turns out Mister wasn’t the only one reading The Big Book of Numbers this week. I am almost ashamed to admit it but I also crossed to the dark side. That’s right. I was reading it too. I even enjoyed it and could even understand some of it. For someone who sticks with 10 digit arithmetic, that’s a glowing endorsement!

I mean I live, breathe and even eat the thesaurus.

After all, as we all know, the world is divided into two very distinct camps. There’s alphabet soup on one side and number soup on the other and never the twain shall meet. That is, unless you’re talking about someone who is off the charts smart. What my son calls a “brainiac”. Just to clarify that, this word is used to the best of my knowledge, as a compliment, not as an insult.

Once wasn’t enough. Reading the book in class on Open Day.

The reason I crossed to the dark side was simple. Adam Spencer was visiting the kids’ school this week as one of the Dymock’s Children’s Charity’s Book Bank Ambassadors and I was do the publicity for the P & C. That had me behind the camera, grabbing a friend to take notes and then writing what wouldn’t be a churned out press release afterwards. With this job ahead, naturally I felt I had to read the book, especially as Adam Spencer’s face has been calling out to me from the cover for the last six months. Indeed, we’ve almost been having a dialogue. You know how it is when all those books you have piled up beside the bed and all around your desk and almost up to the ceiling, all look up at you with those adorable, irresistible puppy dog eyes saying:”Read me! Read ME!”

You do end up with quite a guilt complex, don’t you?! 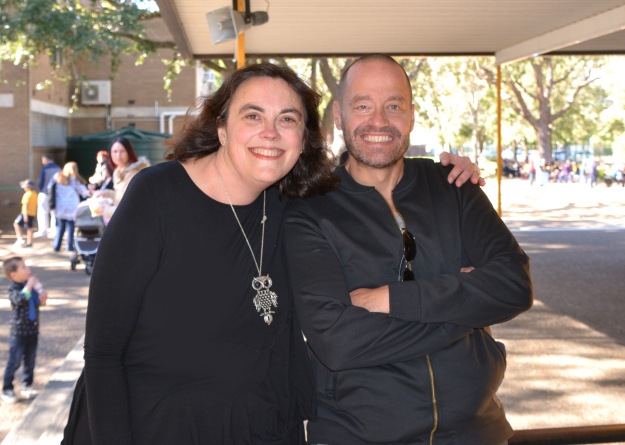 Adam Spencer at school this week. Quite a change of pace to Sydney University’s Manning Bar!

Yet, just to add further fuel to my guilt, Adam Spencer and I went to Sydney University together where not all roads but a great many, led to Manning Bar before, during and after lectures. Just to set the record straight, I wasn’t much of a drinker but I was a talker. Anyway, Adam and I weren’t what you’d call friends but were possibly “mates”. That’s a sort of generic term we use in Australia to describe just about anyone you’re a bit friendly with over those few degrees of separation. Close friends of mine were friends with him.

Adam Spencer gave the kids an entertaining and mathematically mind-boggling presentation which culminated with his enthusiastic message to “Read! Read! Read!. However, for me personally, the greatest moments were those few unplanned minutes afterwards where the “maths geeks” popped out of the woodwork not only wanting copies of their Big Book of Numbers signed. They really wanted to talk with Adam and share his world, even if only for a few brief minutes because they’d found someone like them. Maybe, they weren’t quite “the best mathematicians in the world”, which is how my son referred to Adam, but they spoke the same language. Who knows? Perhaps, there was a young mathematician in that hall whose whole life path suddenly opened up to them. That after hearing and meeting Adam Spencer that they now know who they are and possibly even where they belong. That is a struggle for anyone I think and a possibility, which was opened up by this great opportunity. By having the opportunity to step outside their usual sphere and experience something else.

I certainly know Adam Spencer’s visit and his book have opened up my son’s mind and have very definitely lit a spark. Who knows where that will go. He is only 11 and his journey is only beginning. As Lao Tzu wrote so well:

A journey of a thousand miles begins with a single step.

The only trouble is that as an 11 year old, Mum and Dad somehow need to keep up!

So how about you? What was the book which launched your love of reading? How about kids? I love to hear your stories!

20 thoughts on “The Journey of A Thousand Books Sets Sail.”