While being November, there’s been a lot of talk in the blogosphere about NaNoWriMo and many have leaped onboard the Nano juggernaut. How many words have been written. How people are progressing towards their target. Or, if things aren’t progressing as hoped, there are tips, words of encouragement and probably even a stiff drink or caffeine hit as well.

Being the sort who’s usually easy lead astray, I almost jumped onboard the NaNoWriMo juggernaut myself. However, thankfully I recognised a distraction for what it was and kept walking. I am quite proud of myself because I usually lap up such distractions and wake up in a different universe before I realise just how far off course I’ve ended up.

However, even though November in Sydney is a lousy time of year to embark on any kind of lengthy writing project, after almost ten years of fiddy faddling around with the Book Project, I am finally making headway. I bought myself a set of multicoloured cards and a file box, a box of black pens and a packet of multi-coloured pens and the research process is well and truly underway. Of course, buying the pre-requisite stationery is an important precursor to writing. However, I’ve also progressed to typing up excerpts from my Paris journal, revisiting Paris through Google Earth and getting in touch with people I met.I’ve even been re-working poems and writing new ones.

The Book Project is on. It’s definitely on!!

However, I always knew writing this story wasn’t going to be easy.

Of course, writing any great story isn’t usually easy. It’s exhilarating but there’s usually at least some kind of hard work involved…or much angst. As much as angst hurts and even destroys, it also does wonders for my creative juices…just like some huge, salivating slobber-dog eyeing off a bone. (Remember Beethoven: https://www.youtube.com/watch?v=ShFd7rYSTkE)

At the moment, I am immersing myself in the Paris part of the story. While in some ways Paris might sound a bit clichéd and what hasn’t been written about Paris? However, I was an Australian in Paris and this story is going to land in Australia and even criss-cross the Nullarbor a few times between Sydney and Perth and even head North up to Geraldton. So, it’s not your classic Paris story at all!! 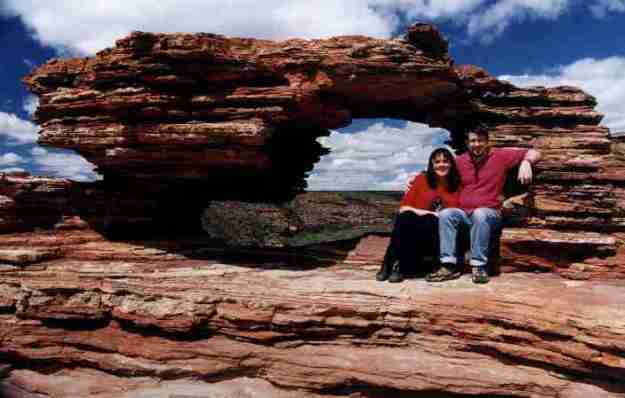 George and I at Nature’s Window, Kalbarri North of Perth in 2002.

I know I’m sitting on a great story. That’s not a point of pride or showing off. It is an adventure where the landscape reflects an inner journey searching for all those answers that we look for in our twenties yet through a distorted perspective. I had undiagnosed hydrocephalus, or fluid in the brain, which was an absolute time bomb ticking in my head which ultimately exploded. Yes, it wasn’t pretty either!

However, brain surgery, family friends, my faith and much reading and soul searching brought me to a place of healing. Not perfection but healing…an important distinction!

My husband and I met in the aftermath of that catastrophe and he loved me and accepted me (well, most of the time) for who I was. It was as close to an unconditional love as you could find and we’ve been through immense struggles, argued, almost fallen apart but we’re still together. We’re still walking together…along with our kids and the two dogs.

One of the troubles I’ve had with writing the parts of my story before meeting my husband, is that they do not involve him. That’s awkward in itself because like most of us, I’ve shut the door on all of that and we don’t talk about it. We don’t need to. However, through writing a memoir, it’s inevitable that a lot of this other stuff is going to dug up and even if it didn’t involve sex, there were intimate emotional attachments and these also encroach on what we have. After all, a marriage isn’t just about sexual fidelity. It’s also about sharing yourself, your heart and soul and grey matter.

When writing a memoir, there can potentially be a very broad cast of what might be minor characters in my story yet they’re still the protagonist in their own life. They don’t need to end up being a character at all. They’re just hiding under a rock and no doubt want to stay there in peace.

I need to respect other people’s privacy and also their need to have their integrity left in tact. They need to be able to walk down the street and feel good about themselves no matter what someone might have written about them. That’s even when it’s tempting to wield the pen, when you can’t use a sword. A bit of poetic justice might feel justified but writing a book is a responsibility. I am carrying all these people on my shoulders through what I say and also what I don’t say.

It’s no wonder I haven’t told this story before.

However, it’s a story that needs to be told. Too many of these motivational speakers and writers out there are selling false dreams. That if you want something bad enough, you can make anything happen. That’s just not true and it makes people feel like losers when they can’t pull of such miracles for themselves. Indeed, when they find out they’re only human!

I have had some incredibly dark moments along the road and these happen. People, especially young people, need to be equipped to get through and learn the incredible lessons these moments give us rather than avoiding the struggle or giving up but I also believe they often need a helping hand.

I’ve also got to be honest and say that I want to make it as a successful writer. I want that book published with my name on the spine and I want a bit of credibility. At the moment, I’m a gunna-do and that is even worse than being stuck in a real job.

Hey, I‘ve just written  1,074 words about getting started. I wonder if that counts towards the word count? Actually, I think it reads like a Mission Statement. A rather long one but something to keep me going.I’m going to need to remember why I am doing this and the hours mount up.

Any thoughts or suggestions? I’d love to hear from you!

11 thoughts on “Writing Memoir: Unpacking the Past.”