Welcome to our nightmare.

We have spent the last three days being battered by cyclonic winds and extremely heavy rain. While we didn’t lose power, we’ve had a tree fall on the clothes line. The roofing in the back room started a quest for freedom and Geoff was up on the roof battening down the hatches. A glass panel also broke in the louver windows out the front and he had to stick up a sheet of plastic to keep the rain out. We also went through a staggering cast of towels, which soaked up water flowing in underneath the front door. For awhile there, my computer was even being protected by a beach towel draped over the top like a tent.

Geoff was up the ladder at the height of the storm fixing the roof.

If you want to get a taste for it and walk in our shoes then:

1) Get a fire hose.Turn it onto full bore.

3) Throw in a bucket of beach sand.

4) Turn these all on at once and stand in front.

Fallen tree branch down the street.

That describes the physical impact.

However, there’s also the psychological impact…the fear. that deep-seated, incredible fear. The wind is whirling and howling outside with such terrifying force and the house is rattling, shaking and flapping and rain’s getting in places it’s never been before. After all, we live in a house not a leaky sieve! The force of the wind was so strong that I had to push the front door shut to close it. I am still shaking inside, not wanting to venture out and just wanting to wrap myself up in a huge doona and hibernate in the house like a bear. Actually, digging a deep cave underneath the house (something like a tornado shelter)  sounds even better!

Ocean Beach, Umina. The surf here is usually fairly calm so this churning mass is quite exceptional!

That said, we ventured out yesterday afternoon to take some photos around town in between blows. There were fallen trees all over the place and streets and footpaths had been turned into instant duck ponds. At a local park, the shade sail had been savagely torn and was flapping around like a lunatic.Rows of bins had been blown around and were lying beside the road like rows of fallen soldiers. Indeed, our garbage truck had turned up right at the height of the storm and Geoff was out there holding it up so the track’s huge metal arm could lift it up and empty the waste. My goodness. Even that was an ordeal! 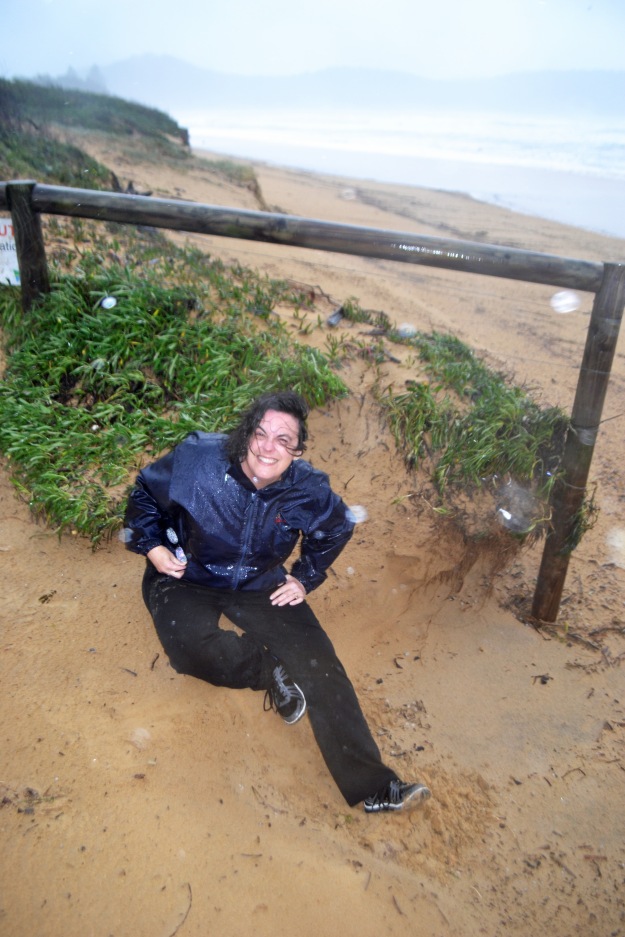 I’d do anything for a photo- including venturing out into the rain but Geoff was the wind beneath my wings.

Just in case you think my penchant for hyperbole has gone into overdrive and my aversion to rain has clouded my judgement, the winds were gusting at up to 135 kph and in places 200 mm of rain fell in less than 24 hours. It was so bad that the kids’ school has been closed for two days. This has never happened before. Business in the area has virtually come to a stand still as well due to blackouts and fallen trees. It’s become something of a war zone.

Rubbish bins thrown around beside the road. The sand has been swept in from the beach across the road.

I’m still shaking. Tomorrow, the kids are due back at school and I just don’t know. It doesn’t feel safe. After going through all of this, it’s only natural to want to keep my chicks safe in the nest. Right now, even stepping out the front door still feels terrifying. Dangerous.

Joked to a friend on the eve of the storm that I’d never survive in a cold climate.That I’d be stuck in the house for 9 months of the year. I mean…I even struggle with heavy rain. It’s my kryptonite. However, this was no ordinary rain storm. Even the authorities ordered people to stay indoors and only undertake essential travel. That’s more than rain phobia. It’s a severe storm.

Shade sail torn to shreds at the local park.

After going through all of this and feeling rather ragged, avoidance is a luxury I don’t have. School’s open tomorrow and I need to get the show back on the road. Throw myself back out the door and put the rattles to rest. 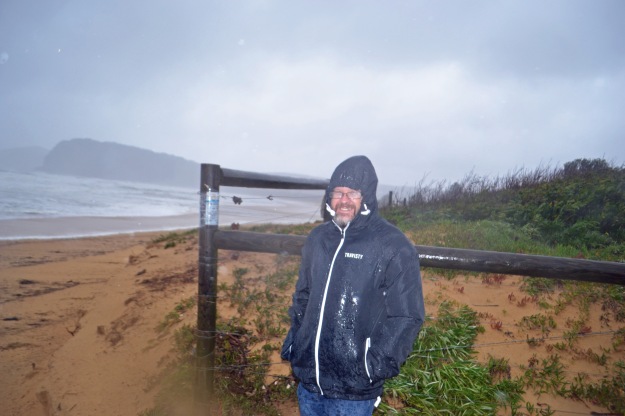 Geoff out in the storm at Ocean Beach.

It’s all very well to know the importance of confronting your fears and how this actually causes them to shrivel up and die but you still need to take up the challenge. Those aren’t somebody else’s shoes that I need to step into but my own. I’ve conquered mountains but now I simply have to do is step out the door but won’t be easy. That said given the usual morning chaos, I’ll probably be too rushed to even think about fear. Switched to autopilot, I’ll simply do it.

After all, a little bit of rain is hardly the end of the world!

Flags flapping in the storm.

This has been S for Sydney Storm for the Blogging from A-Z Challenge.

20 thoughts on “A Drowned Rat in the Sydney Storm”