We have heard you’re working on writing: Dogs The Musical. It’s about time the dog had its day. For far too long, those ratbag cats have been deified and celebrated on stage and screen. Our time has come. Indeed, it’s long overdue!!

Before we proceed any further, please allow us to introduce ourselves and provide something of a Curriculum Vitae. .

Firstly, there’s Flush.I must admit I feel rather sorry for Flush since the invention of the modern flush toilet. “Don’t forget to Flush the toilet!” Quite an insult to such an aristocratic dog. Flush also means red in colour, as when your face is flushed. Flush is a red Spaniel.

While Flush spent his early life out in the countryside, he was adopted by the esteemed poet Miss Barrett of 52 Wimpole Street, London while still an invalid, exchanging a myriad of scents for the stench of eau de cologne. Indeed, it is in his role as Miss Barrett’s dog that Flush gained fame and literary attention. A frequent topic in Miss Barrett’s diaries, she also wrote two poems about her beloved pooch.

Indeed, the story of Flush, attracted  the attention of my mistress, novelist Virgina Woolf. She wrote: Flush A Biography, where she wrote about Elizabeth Barrett’s famous love affair with fellow poet Robert Browning which ultimately culminated in their secret marriage on September 12, 1846, at St. Marylebone Parish Church, where they were married. She returned home for a week, keeping the marriage a secret, then fled with Browning along with Flush to Italy.

After that rather lengthy introduction, my name is Pinka. I’m also a Cocker Spaniel and was a gift from poet and novelist Vita Sackville-West to novelist Virginia Woolf in 1926. You could say that I’m their furry love child. 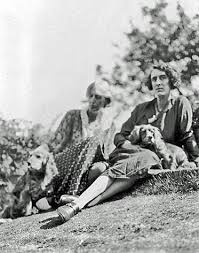 Vita Sackville-West, Victoria Mary Sackville-West, Lady Nicolson, CH (9 March 1892 – 2 June 1962), was an English poet, novelist, and garden designer. A successful and prolific novelist, poet, and journalist during her lifetime—she was twice awarded the Hawthornden Prize for Imaginative Literature: in 1927 for her pastoral epic, The Land, and in 1933 for her Collected Poems—today she is chiefly remembered for the celebrated garden at Sissinghurst she created with her diplomat husband, Sir Harold Nicolson. She is also remembered as the inspiration for the androgynous protagonist of the historical romp, Orlando: A Biography by her famous friend and admirer, Virginia Woolf, with whom she had an affair. (Wikipaedia)

In 1930, after Virginia Woolf attended Rudolf Besier’s play, The Barretts of Wimpole Street, she began to reread Elizabeth Barrett Browning’s poetry and letters. Woolf’s fanciful biography of the Brownings, seen through the lens of their cocker spaniel, was published in 1933, with four drawings by Vanessa Bell. I was was photographed for the dust jacket and frontispiece of the first edition.

Being literary dogs ourselves, we wanted to offer our whole-hearted support. After many years supporting our humans through the writing process, we feel more than qualified to help. Indeed, knowing how his Mistress’s romance was turned into a play, Flush thought this would make a good springboard for Dogs The Musical. After all, the Brownings weren’t the only ones who found true love in Italy. Flush also met the spotted spaniel as well as quite a few other dogs on the side. Indeed, he became quite a Casanova. Personally, I can’t help wondering just how many descendants Flush has running around those Italian alleyways. He’d even fathered a litter of pups before he was fully grown. Just as well he wasn’t human!

Anyway, it’s our suggestion that dogs the musical be about what it means to be a poet’s dog. Being expected to understand all sorts of human mysteries and emotions which don’t correspond to any canine equivalent. They think in words, while we think in smells. Quite incompatible really. 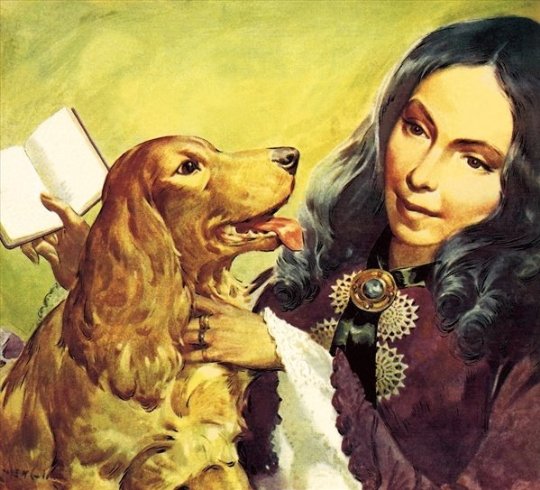 Here are a few paragraphs we found in Virginia Woolf’s Flush: A Biography.

“And yet sometimes the tie would almost break; there were vast gaps in their understanding. Sometimes they would lie and stare at each other in blank bewilderment. Why, Miss Barrett wondered, did Flush tremble suddenly, and whimper and start and listen? She could hear nothing; she could see nothing; there was nobody in the room with them. She could not guess that Folly, her sister’s little King Charles, had passed the door; or that Catiline, the Cuba bloodhound, had been given a mutton-bone by a footman in the basement. But Flush knew; he heard; he was ravaged by the alternate rages of lust and greed. Then with all her poet’s imagination Miss Barrett could not divine what Wilson’s wet umbrella meant to Flush; what memories it recalled, of forests and parrots and wild trumpeting elephants; nor did she know, when Mr. Kenyon stumbled over the bell-pull, that Flush heard dark men cursing in the mountains; the cry, “Span! Span!” rang in his ears, and it was in some muffled, ancestral rage that he bit him.

Flush was equally at a loss to account for Miss Barrett’s emotions. There she would lie hour after hour passing her hand over a white page with a black stick; and her eyes would suddenly fill with tears; but why? “Ah, my dear Mr. Horne,” she was writing. “And then came the failure in my health . . . and then the enforced exile to Torquay . . . which gave a nightmare to my life for ever, and robbed it of more than I can speak of here; do not speak of that anywhere. Do not speak of that, dear Mr. Horne.” But there was no sound in the room, no smell to make Miss Barrett cry. Then again Miss Barrett, still agitating her stick, burst out laughing. She had drawn “a very neat and characteristic portrait of Flush, humorously made rather like myself,” and she had written under it that it “only fails of being an excellent substitute for mine through being more worthy than I can be counted.” What was there to laugh at in the black smudge that she held out for Flush to look at? He could smell nothing; he could hear nothing. There was nobody in the room with them. The fact was that they could not communicate with words, and it was a fact that led undoubtedly to much misunderstanding. Yet did it not lead also to a peculiar intimacy? “Writing,”–Miss Barrett once exclaimed after a morning’s toil, “writing, writing . . .” After all, she may have thought, do words say everything? Can words say anything? Do not words destroy the symbol that lies beyond the reach of words? Once at least Miss Barrett seems to have found it so. She was lying, thinking; she had forgotten Flush altogether, and her thoughts were so sad that the tears fell upon the pillow. Then suddenly a hairy head was pressed against her; large bright eyes shone in hers; and she started. Was it Flush, or was it Pan? Was she no longer an invalid in Wimpole Street, but a Greek nymph in some dim grove in Arcady? And did the bearded god himself press his lips to hers? For a moment she was transformed; she was a nymph and Flush was Pan. The sun burnt and love blazed. But suppose Flush had been able to speak–would he not have said something sensible about the potato disease in Ireland?

And yet, had he been able to write as she did?–The question is superfluous happily, for truth compels us to say that in the year 1842-43 Miss Barrett was not a nymph but an invalid; Flush was not a poet but a red cocker spaniel; and Wimpole Street was not Arcady but Wimpole Street.”

Anyway, Bilbo and Lady, we understand that you’ve already received support from Dorothy Parker and that her dog, Misty, is to play a leading role, but we thought you could work her into the story of Flush somehow and the two of you could add an Australian dimension to the story. 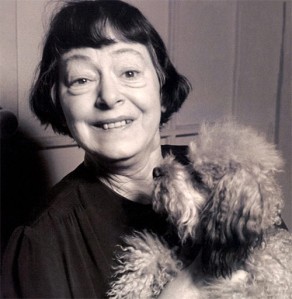 Speaking of  Dorothy Parker, has she let you out of the dog salon yet? From what we’ve heard, you received heavy duty treatment and Lady had all her scruffiness clipped away and clad in a dainty pink tutu. We can’t wait to hear reports about how she fares on her return to Dog Beach. That said, I doubt you’re allowed to go anywhere near the beach with your new coats!

Anyway, we’ve leave you to consider this further. However, don’t delay. The dog’s day has come!

PS I know Mum has written much about women’s struggles to reach their true potential but what about us dogs? Who is going to rise to our defence and grant us equality and access to beaches and parks off the lead? Moreover, as much as Mum wrote about Judith Shakespeare’s chances of being able to write and appear on stage, what about the plight of Canine Shakespeare? I tell you, not a word!

Sure, I know the likes of Lassie and the Dulux Dog have succeeded but what about chronicling the lives of your garden variety backyard dog, spending their entire day at the gate waiting patiently for their humans to come home? I tell you. There is loyalty! Surely, that has to count for something!!