It’s no wonder I needed an ambulance and a stretcher when I reached the end of the A-Z Challenge. I’d researched and written a staggering 66, 652 words and these weren’t any ordinary words either. They were probing philosophical investigations into the works and lives of over 30 exceptional poets, which were interwoven with my own ups and downs through life’s milestones.

Just to recap, my theme was Letters to Dead Poets. While writing to dead poets does have an air of the macabre, the theme was simply a play on Rainer Maria Rilke’s Letters To A Young Poet. If an old poet could give advice to a young poet, surely dead poets had something to offer!

Each letter explored philosophical questions such as what it means to be a man, how to deal with adversity and a poet’s heart and somehow survive. Many of these poets didn’t.Naturally, I couldn’t write these letters without addressing the tragic nature of their deaths. Indeed, I wrote this post: Dedication To A Poet Dying Young. Emotionally, this was incredibly difficult and challenging, which stretched well beyond showcasing the poets who’ve inspired me through life’s ups and downs.

It is a reflection of my own tenacity that I could grapple with these contentious issues without going down myself. That my feet are firmly planted on terra firma and my head, heart and soul are in a good place. This isn’t something that happened overnight. I have a poet’s heart and have always been incredibly sensitive and know all too well how to dance with the dark side and succumb to its charms. I have survived brain surgery and live with a life-threatening auto-immune disease. Life is no picnic. I’ve gone up in flames and somehow walked out of the ashes. Well, I was actually carried out unconscious but I’m still here. 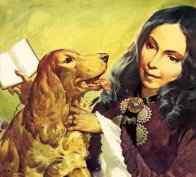 Not unsurprisingly, I needing to balance out the heaviness and developed a lively undercurrent with the age-old battle between cats and dogs. There were poets who were famous cat lovers like TS Eliot and Ernest Hemingway and ardent dog lovers including Elizabeth Barrett Browning, Dorothy Parker, Virginia Woolf and Sir Walter Scott, Wordsworth and Sir Walter Scott. My two dogs jumped into the fracas standing up for the “pollicle” dogs (poor little dogs …TS Eliot). They were rather unimpressed that there is no Dogs: The Musical!!

Quite unexpectedly, many roads led to Paris. Paris the city of love, which can inevitably become the city of heartbreak. Although heartbroken in Paris myself back in July 1992, I did a solo poetry reading at Paris’s famed Shakespeare Bookshop , which attracted the likes of Hemingway, Henry Miller and Anais Nin when they were in town.Somehow, a 22 year old backpacking Australian with her self-published anthology Locked Inside An Inner Labyrinth, was following in their enormous footsteps. I have since discovered that young poets were considered “audience”. So, I have no idea how this crazed backpacker from the Antipodes slipped through the cracks and up the rickety red wooden staircase to perform.

So, after going through all of this, it is hardly surprising that I staggering across the finish line barely conscious. Every cell in my body was aching and my brain had liquefied into soupy mush. That’s what happens when you try researching and writing faster than the speed of light. You start to fall apart.

By writing so much, I clearly went way beyond the scope of the challenge, which really is about writing very short, sharp posts under 500 words and becoming something of a blogging slut getting around to as many blogs as possible every day to build new connections and expand your reader base. However, I went the other way. Instead of short and sweet, you could say I did the extended version. However, they cover significant psychological and philosophical issues and aren’t simply a handful of words…a throwaway.

So without further ado, here’s An A-Z of Letters to Dead Poets:

F:Robert Frost: The Road Not Taken.

A Surprise Letter From Ernest Hemingway.

Q & A With Ernest Hemingway.

I- A Letter to Issa- Japanese Haiku Master.

A Letter from Rudyard Kipling including the poem: “If”

A Reply From John Lennon.

Lao Tzu: A Poem about The Journey.

A Letter from Mary Stevenson re “Footprints”.

Help Me Dorothy Dix: What to Write to Sylvia Plath.

A Letter to Sylvia Plath

I delayed writing my letter to William Shakespeare by a day to coincide with the 400th Anniversary of his death on 23rd April, 1616. By the way, when Shakespeare woke up, he found his head was missing.

Despite writing some of the most loved and recognised love sonnets of all time, Shakespeare admitted that his track record with love wasn’t a commendation. So, he introduced me to poets Elizabeth Barrett and Robert Browning.

Shakespeare on Love 400 Years On.

V- A Letter To Virginia Woolf

Wordsworth I Wandered Lonely As A Cloud

ZZZZ: A Letter from Xu Zhimo

We Are Donne: Donne

I hope you’ve enjoyed the A-Z Challenge and are returning to life again after a week’s R & R.