After so many early starts what with driving to Melbourne and boarding the Spirit of Tasmania, we slept in past midday on our first full day in Tasmania and decided to have an easy day and stay local. We are staying with friends in bushland outside Devonport most of the time. Therefore, a 30 minute drive to nearby Penguin made sense.

Yet, for us, Penguin is so much more than a tourist destination, or random spot on the map.

Geoff’s father was born and raised in Penguin. He was born in the late 20s and much of his childhood was during the Depression. Obviously, times for most were incredibly tough. However,their struggles were seriously compounded when his mother died when he was only 9. That’s dreadful for any kid but his father was often away for work, leaving the two boys to pretty much fend for themselves. I can’t even begin to understand what this was like, but my father-in-law was always a cautious man. Not that I ever met him. He passed away when my husband was 16.

So, our trip to Penguin was much more of a pilgrimage. It was a heartfelt effort to do the very best we could to put ourselves into his father’s shoes and walk with him for a bit.

Of course, this “we” also included our kids. This young boy grieving for his dead mother, was their grandfather. While they’ll never be able to know him, go fishing, do the things you do with grandparents, we at least wanted them to have a sense of him. For them to know, that he was just as real as you and I and should never be left out of our story simply because he left too soon.

Not unsurprisingly, when it came to retracing the family’s steps, we had so little to go on. An address where they used to live up the West end of town, which we found out is called Mission Hill. They farmed up there and that’s apparently where Geoff’s uncle was bitten by a deadly snake and his Dad had to get him to safety. I don’t know if his views on snakes were defined by that moment. However, I’ve been told that he was renowned for saying: “the only good snake is a dead snake!”

Unfortunately, the houses on Mission Hill have been cleared and new housing has taken its place. 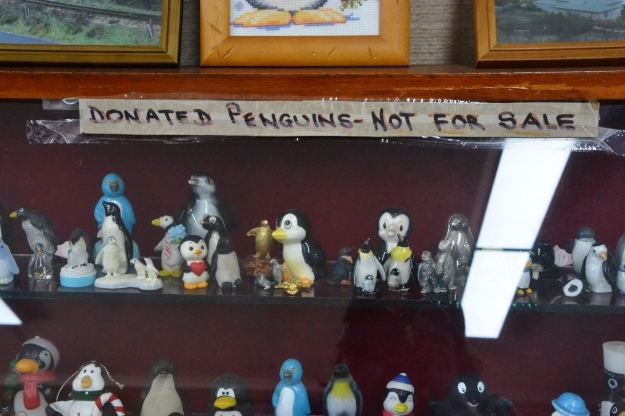 Penguin had a drive to collect 2000 penguins.

However, we stopped in at the Visitors’ Centre asking about where they lived after leaving the farm, when times got really tough after Geoff’s grandmother’s death. Apparently, they lived above a bakery. Fortunately, there was only one option there and we were put onto HG Brown’s old bakery. Apparently, it was rebuilt in 1912 after a fire destroyed the bakery in 1911. A homeware’s shop is now located on the ground floor. They were lovely letting us take photos and as I was sticking my camera lens down the side of the building, the guy living upstairs introduced himself and I asked if we could have a look. He agreed and I can’t tell you what that meant to us. We were so stoked. Overjoyed to actually get inside where Geoff’s Dad had once lived. Indeed, our son said it was one of the best things he’d done on our first days here.

I had quite a heavy heart walking around Penguin. We crossed what has become a rather omnipresent railway track and went onto the beach. Our son climbed a huge rock projecting out of the sand and then we headed over to the rocky point.

This is when I switched gears entirely and turned on my photographic eyes and started viewing the rocks in 6 x 4. All my senses switched on and I was on full alert. There were these rugged, black,  basalt boulders protruding out of the sand, many painted with bright orange algae. It was so WOW!!! The shots were fantastic!

At some point through all of this, we took the kids to the Penguin lolly shop. It was like they’d been lured away by the pied piper. It was a great place where they could fill a plastic cup up with lollies… the sensational Jersey Caramels being their faves.

Given our late start, it wasn’t long before we were thinking about dinner. We ended up buying fish and chips. They were really good, although I was struck by the colour. The batter was bright orange and I’ve never seen batter that colour before. We have since had discussions about what makes it orange, considering such things as the type of flour, perhaps a different type of beer. I later found out that many of the fish and chip places around here add orange food colouring to the batter. They also mentioned they can accidentally add too much food and it goes a really bright orange. We avoid colours so wasn’t real happy about that but I survive. Didn’t get too OTT.

As we went to go home, we realized that we’d almost left Penguin without taking our obligatory photo with the fake Penguin. I swear this Penguin looks like he’s had way too much caffeine, drugs or something. Definitely looks odd!

Tomorrow, we head for Penguin’s Ferndene and a drive West to Wynyard.

PS While we’ve been enjoying lovely mild Summer temperatures down here, Sydney is sweltering at around 40ºC. Our houseminders have been taking particularly good care of our dogs and we’re so grateful!

14 thoughts on “Penguin…On the Road Around Tasmania.”