Welcome to Day 22 of the Blogging A-Z April Challenge.

As you may be aware, we’re Travelling Alphabetically Around Tasmania on Beyond the Flow this year.  Last night, we stayed at Wines for Joanie, and today, we’re driving around 215km South-East to Wineglass Bay in Freycinet National Park.

While I know it sounds rather corny travelling from Wines for Joanie to Wineglass Bay, that’s pure, serendipitous coincidence. How the letters fell out of the cornflakes box. Wineglass Bay is shaped like it’s namesake. That’s all.

Quite frankly, Wineglass Bay and the Freycinet National Park is a must-see on even on the shortest visit to Tasmania. It’s totally beyond stunning and absolutely unforgettable. At the same time, you’ll be wanting decent weather to give it its due and to capture a photo worth posting (the competition is fierce). While there’s nothing like a stunning, expansive view to stretch your insides out and liberate you from life’s stresses and strains, Wineglass Bay has to be one of the best natural views in the world. It simply is what it is.

That said, I’ve been to Tassie about five times and I’ve only been there once. Unfortunately, we didn’t actually make it to Wineglass Bay or to Freycinet National Park on our January trip. I also repeat a previous confession, that I visited Queenstown on my first trip to Tassie and missed the stunning East coast entirely, due to lack of research. I was pretty cheesed off with myself, when I found out what I’d missed.

As I’ve said multiple times before, Tasmania is much, much bigger on the ground than it appears on the map. I don’t know how to explain it, but it’s packed to the rafters with so much to do, see, eat and drink that someone must’ve squished it in. Made it fit.

Wineglass Bay can be so stunning, that it’s easy to forget that this can be a treacherous stretch of sea. That there’s nothing breaking the powerful force of the Pacific Ocean between South America and the Tasmanian coast, and those waves can really become fierce, menacing and the makings of shipwrecks. I don’t believe that I’ve even seen a photo of Wineglass Bay when she’s “in a mood” or “throwing a tanty”. However, just because this alter-ego might not suit the tourist brochures, that doesn’t mean it isn’t there.

Check out that wind.

Here are just a few headlines I’ve sandwiched together:

SEAMAN DROWNED. FELL OVERBOARD NEAR WINEGLASS BAY. The Mercury (Hobart, Tas. : 1860 – 1954) Friday 16 January 1925 FISHING BOAT WRECKED. IN WINEGLASS BAY. HOBART, Thursday.  The North West Post (Formby, Tas. : 1887 – 1916) Friday 3 November 1916 p 3 Article…FISHING BOAT ASHORE. STRANDED IN COLE’S BAY. A large fishing; boat on her way from Devonport to Hobart took shelter in Wineglass Bay on Friday, but owing to the easterly -weather she had to leave, and made through the Schouten passage on her way to Hobart. A heavy south-westerly gale towards evening forced her to turn and make for Coles Bay, which was reached early on Saturday morning. Owing to the darkness the boat ran ashore, and was left stranded. The spare gear was removed, and it was expected to refloat the boat during the week-end. Mercury (Hobart, Tas. : 1860 – 1954), Thursday 28 December 1933, page 2… STRANDED SHIP The interstate freighter Merino ran aground early yesterday morning near Wineglass Bay, on the East Coast of Tasmania. On board is a £100,000 collection of French paintings, as well as 200 tons o£ general cargo. The 549-ton vessel is not in any immediate danger. Two Hobart tugs, the Maydena and Boyer, are on the spot. Mercury (Hobart, Tas. : 1860 – 1954), Friday 26 December 1952, page 1…The fishing smack Lucy Adelaide is a total wreck at Wineglass Bay. Weather Delays Lighthouse Ship North-easterly weather has held up the lighthouse supply ship Cape York at Wineglass Bay, Freycinet Peninsula, and she is now not expected to (berth at Hobart until tomorrow evening.The Cape York has been inspecting the Cape Forestier light house. The vessel probably will start loading stores tomorrow night for her trip around the Tasmanian lighthouses Mercury (Hobart, Tas. : 1860 – 1954), Monday 20 September 1954, page 3…

I thought this story of being shipwrecked on Tasmania’s East Coast back in 1935 was so gripping, that I’ve posted it Here 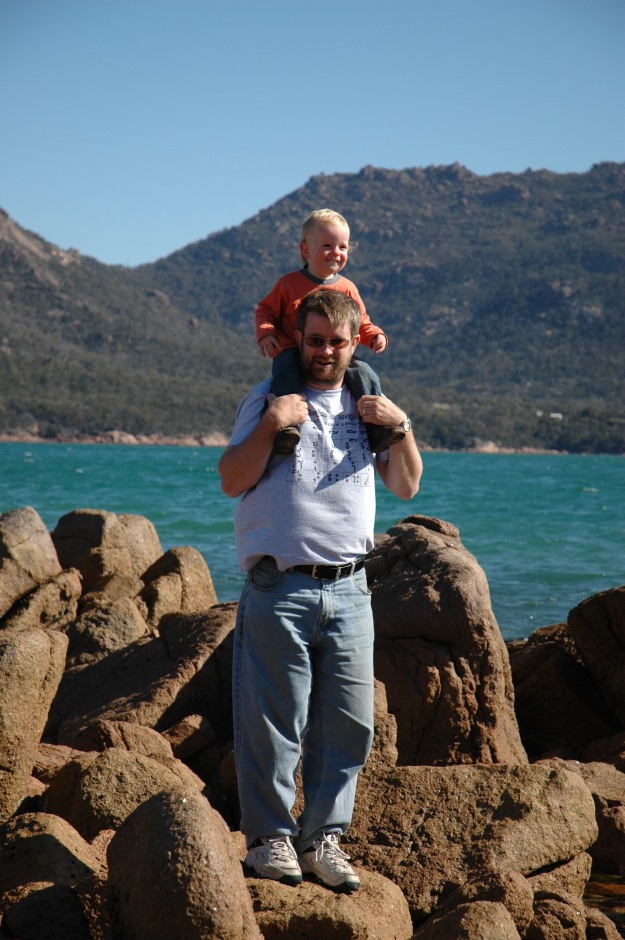 However, let’s return to Wineglass Bay. Unfortunately, my chronic illness prevents me from walking down to Wineglass Bay. So, today we’re just going to stick to the lookout and visit nearby Coles and Sleepy Bays and you might notice our son has shrunk a little and through some kind of mystical, fairy magic, has become the Little Man again. He’s been missed. 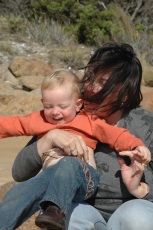 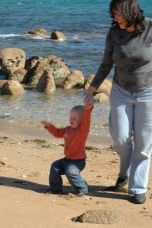 I hope you’ve enjoyed Wineglass Bay and have the opportunity to experience it in person yourself long before you need to write that dreaded bucket list!