Having our son back safe and sound from Australian Scouting Jamboree was only half of the equation. Finding out what happened at camp was undoubtedly more challenging, requiring great journalistic and detective stealth and all sorts of secret, underhand tactics. Bribery and corruption are just what I can mention in public. It gets a hell of a lot worse.After all, you have to be very sneaky to navigate your way around the hard and fast rule: “what happens at camp, stays at camp”. Not even the leaders dob.

While I’m a strong believer in giving my kids room to grow, you can’t blame me for being interested in my child, can you?

For better and for worse, I couldn’t be that fly. Instead, I had to let both of us go so we could each grow and stretch our wings. That said, somehow I managed to fly into a paint tin and spent ten days renovating his room along with his Dad. But that’s true love, isn’t it?!!

This, of course, leaves me with a very fragmented, patchy and distant view of what he’s been up to. It’s going to take time for all the stories to percolate into conversation but I’m doing my best to help him capture these memories to last a life time.

That said, thank goodness, there’s been a Facebook page where leaders posted photos for the families. However, Mister’s been conspicuously absent. Well, not entirely but if you’ve seen me in action, it’s nothing for me to take 300 photos in a day, so there was always going to be “a gap”.

A gap I’m sure all parents know too well. It’s that automatic gap which follows a parent’s enthusiastic: “How was it?” There’s that silence which might, if you’re very lucky, be followed by a grunt or a “nothing much” as they find the real meaning of life in Minecraft.

Anyway, as other parents would appreciate, taking a direct approach, usually yields poor returns. Instead, you have to be devious. Eavesdrop. Ask their friends. I have found that even though “leaky lips sink ships”, someone is usually only too willing to share but it usually takes a bit of time.

I should add that the scouts weren’t able to take phones away to camp. Our son is yet to acquire a mobile so we weren’t used to being able to contact him any time any where but he did call me twice but these were brief 2 minutes snatches before the money ran out.We weren’t a local call.

So, you can just imagine my excitement when I overhear Mister talking to his sister on the phone  and I hear the words  “my tips for Jamboree are…”!!

Miss is currently staying with my parents to help Mister adapt to re-entry. We expected him to be pretty tired and that he might need some peace and quiet. Miss is a Cub Scout and was too young to attend this Jamboree but she has every intention of attending in 3 years’ time. Geoff and Miss went down to Jamboree for their open day called “Super Saturday”. She loved it! 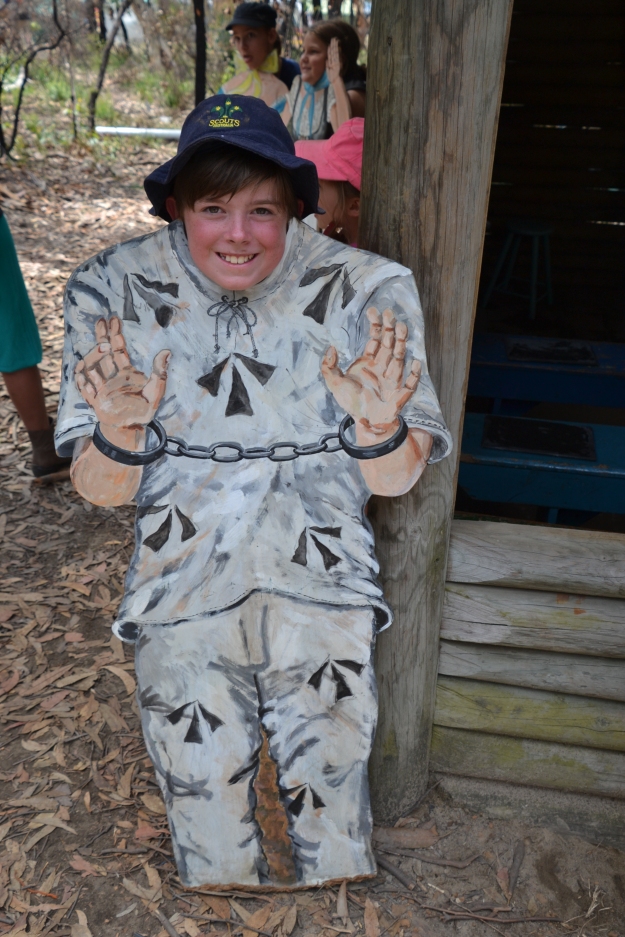 So when I heard Mister authoritatively sharing his”Jamboree Tips” with his little sister,  I was all ears. Better still, being the unashamed eavesdropper and reporter that I’ve always been, I instantly grabbed an old envelope and a pen and was clearly taking notes. How priceless was this? Big Brother giving his little sister advice. It really touched me somewhere deep inside my heart. It was one of those real gooey “ooh” moments where as a parent, you just glow all over with pride!

There were only two tips and I must admit I was hoping there would have been more. However, two life lessons was certainly way more than the grunt I’d anticipated from a very sleepy Scout on his return.

Tip 1: Don’t leave wet clothes lying on the ground. They attract funnel web spiders. Put your clothes on something where they’ll get dry. (They did actually find funnel webs near their tent and I was told “someone was bitten” but very much doubt it.

I’ve since had word from the Scout leader on the subject of Funnel Webs:”Fortunately the funnelwebs only made their presence felt on the last day. Regards tip one with not leaving clothes on the ground wet or otherwise, it wasn’t so much the spiders, but more that the clothes will be, well, wet and you’ll have nothing to dry to wear, seemingly a worse fate!” 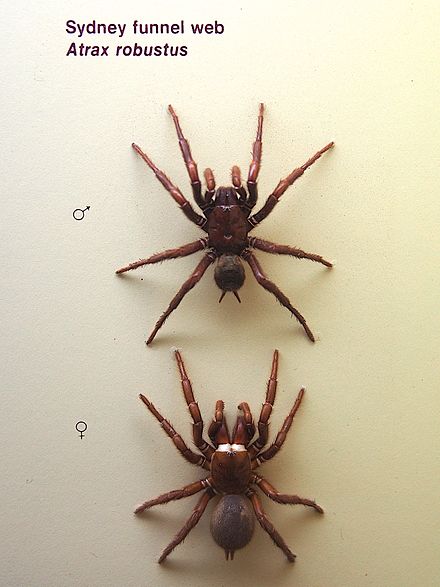 Tip 2: Challenge your limits. I jumped off a board that was 20 metres high and you land on your back or it really hurts. (This was the Stunt Jump and apparently there is some debate about how high it actually was. Geoff thinks it was more like 10 metres)

However, while I thought he was giving these tips to his sister, he was actually talking to my Mum…his grandmother! My mother has certainly tried a range of new things since becoming a grandparent but I doubt camping is going to be one of them…especially co-habitating with deadly Funnel Web! Spiders!

That said, I shouldn’t  sell her short. Why shouldn’t she extend her limits as well? I’m not going to stop her. Yet, at the same time, I can’t imagine her trying out the stunt jump either. Go Granny! Who am I to decide how someone else constructs and re-constructs themselves? A few years ago, I went away on an adventure camp myself and went quad bike riding. Who would have thought? I’m sure the kids thought I was close to being a Granny myself.

No one is set in stone! Human beings are always full of surprises!

Tip 3: Mummy, having a watermelon to yourself isn’t a good thing. I felt sick in my stomach after 12 bites but I kept going. Mummy , they had five crates filled to the top with watermelon. We took 1 1/2 crates and ate them ourselves. 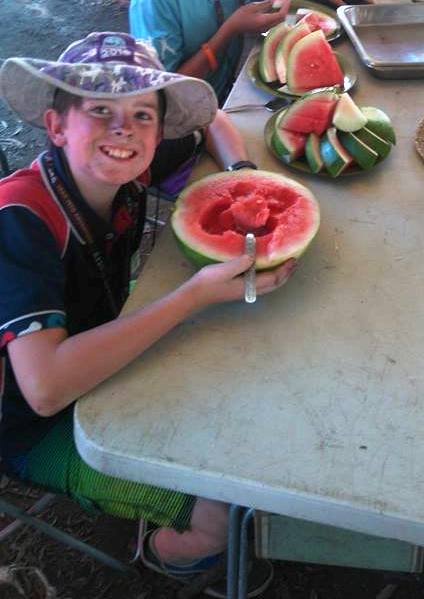 I think all that watermelon went straight to his face!

I’m interested to hear what other life lessons Mister has picked up while he’s been away. Stay tuned!

While I’ve been thrilled that he’s been able to have this experience and  wasn’t worried about him at a conscious level, I was missing him. I’ve been a bit like the dog knowing he should be here and feeling a bit lost or out of kilter without him. That’s not a bad thing either because a bit of absence makes you appreciate each other more and helps to reinforce what’s important.

There are so many things money can’t buy and yet money also funds huge extravaganzas like Jamboree and helps the wheels turn round…a Catch 22.

I also believe children need community beyond their own family. That they need to experience how different people live and that there’s more than one way to do things. That diversity is what gives our world it’s colour, vibrancy and texture. We do not want the world to be full of clones of ourselves. How boring is that? Yet, isn’t that what so many strive so hard to achieve? If birds of a feather only flew together, where would humanity be?

I don’t know AND I don’t want to find out either!

Yet, I still feel pressured to conform, even though I’m beyond the flow and there’s always some part of me sticking out of the box. Even I, with all my rhetoric about accepting and loving ourselves as we are, still instinctively reaches for the scissors to snip all those extra bits off. Don’t you? Even though, we know we shouldn’t because these beautiful “extras” are what makes us who we truly are…our identity. These are far too precious to simply snip off, throw out and yet that quest for “acceptance” can override all sense of accepting and being ourselves.

My son hasn’t mentioned that he felt accepted at Jamboree. That he made friends and belonged but he did. I don’t know how that environment differed to the playground but somehow it did. I don’t know if everyone got on as well as it seemed but at least in the photos, they were one big, extremely happy jungle of kids making the most of the sun, rain and glorious mud…

At least, that’s what I’ve eavesdropped from Jamboree.

Have you ever been involved with Scouts or Guides? Please share some of your experiences!

25 thoughts on “Life Lessons from A Young Scout.”